Big On A Budget: An Ode To The Calorie With Roman "Rex" Fritz

If you're looking for the most efficient, foolproof plan to turn your hard work into sheer size, look no further than IFBB pro Roman Fritz's $50-a-week caloric masterpiece!

There's a time for health—for fruit and vegetables, fiber, and the full rainbow of micronutrients. But there's also a time to lay every one of your precious cents at the altar of the fundamental unit of nutrition: the calorie.

For IFBB pro Roman Fritz, that time was his late teen years, when he was fresh out of boarding school and living on a budget as lean as a trimmed chicken breast. He had been a skinny kid all his life, and he was tired of it. The time had come to transform—to become the bodybuilder he saw when he closed his eyes at night. He wanted a diet that couldn't fail to make him bigger, as long as he knew he trained like he knew he could.

Big on a Budget with Roman "Rex" Fritz


When Animal asked Fritz to take the "Big on a Budget" challenge, he knew right away that he would recreate the diet that made him a man. "I'm trying to make it as authentic as possible, like I did it when I was—literally—growing up," he said. The assignment: Purchase and cook a week's worth of mass-building meals for $50.

But what Fritz heard was: Wring more calories out of Ulysses S. Grant's beard than had ever been done before. On this plan, growth is inevitable. Only proceed if you're ready to train hard enough to earn it.

Upon strolling into Marrazzo's Thriftway in Trenton, New Jersey—like Frank "Wrath" McGrath, Antoine Vaillant, and Evan Centopani had before him—Fritz had to stop for a moment and gaze upon the bounty laid out before him. Bounty, you say? At the Thriftway? The 26-year-old German national was quick to point out that American grocery stores contain a wealth of choices unparalleled around the world. 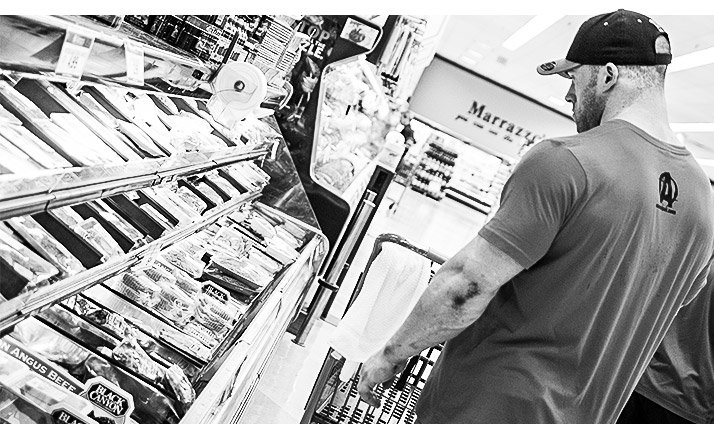 "If you want to gain weight, a little bit of fat's OK," Fritz promised. "Especially when it's red meat, the ultimate growth food."

"Every time I come in a supermarket in the US, I'm blown away by all the stuff you have," Fritz explained. "In Germany, the variety is not even half as amazing as it is over here. You're really, really lucky." He soon found himself hypnotized by shelves of cookies, then reading ice cream labels like great literature. But if you think he was at any risk of getting distracted or blowing his $50 on trash, you don't know Fritz.

His first purchase was the coup of the day: sirloin patties, 86 percent lean, on a two-for-one clearance special. You may gasp at the thought of eating all that fat, but what Fritz saw was a calorie-packed protein source that required no trimming or recalculating for bones or miscellaneous gristle. Just weigh, cook, and eat. What could be better?

"If you want to gain weight, a little bit of fat's OK," he promised. "Especially when it's red meat, the ultimate growth food." With two meals a day worth loaded in the cart, the rest of the shopping almost seemed too easy.

Milk and Eggs for Monster Legs

If there's one thing that Fritz' diet is not, it's sloppy. Every item is measured out and weighed with what he calls "German precision," from his nightly casein shake all the way down to each grain of rice he eats with his sirloin. It's no surprise, then that he filled his cart with no less than 48 chicken eggs, perhaps nature's most precise food. He hardboils them 18 at a time, enough for three breakfasts, and starts every day knowing exactly what he's getting in terms of protein, fat, and calories. 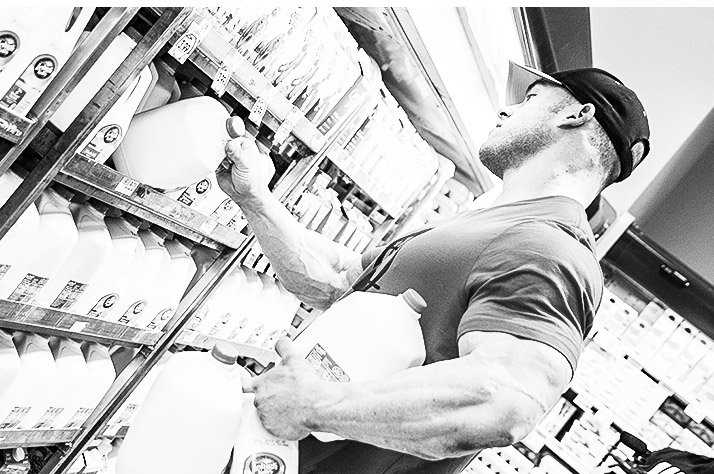 Fritz advises sipping on a half-gallon of whole milk across the day in order to keep "a steady flow of calories and amino acids" coming in.

His approach to milk is slightly more free-form. He purchased 3.5 gallons for the week—whole, of course—and advises sipping on a half-gallon across the day in order to keep "a steady flow of calories and amino acids" coming in. "Just space it out," he says. "When you're in school, maybe with your protein shakes, maybe a little bit for breakfast. And you want to use whole milk because if you want to gain, you need the extra calories."

At four solid meals a day—plus that intravenous milk drip—Fritz' diet comes in at just over 3,700 calories a day and 241 grams of protein, not counting his post-workout whey shake and a casein shake before bed. It's close to, but not quite, lining up with big, round numbers like 4,000 and 250—almost like the gods of nutrition were telling him, "You can try, but you're only human."

Perhaps this is why Fritz also calculated some chaos into the equation, in the form of a single glorious jelly doughnut. This treat—a "tasty-taste," as McGrath would call it—is what awaits him after he trains legs or back. It adds a certain unquantifiable something that can't be replaced, but consider Fritz's triumph at the 2014 Amateur Olympia proof that it works.

After spending 49 of his $50, leaving not even enough left for "a pack of gum or some Gas-X," here's what Fritz's weeks' worth of meals looks like.

Expect to come away with a new respect for what some can be done with a few dollars and a whole lot of animal fat. "This is a lotta calories," Fritz promises. "If you can't gain weight on this one, man, you ain't human. Maybe pick up golf or chess."

Big On A Budget: Food Shopping Like An Animal With Frank McGrath

Is it possible to eat enough to grow on only $50 per week? It is, according to IFBB pro Frank McGrath. Hop in the kiddie seat and let him push you down the grocery aisle.

Antoine Vaillant's physique is earning fans worldwide, but how he built it is no secret: Beef, rice, tuna, and lots of it! Eat like him and grow like this Canadian beast for just dollars a day.

Eat Like Ox: Get Big On A Budget With Evan Centopani

The grocery aisles are barely wide enough to contain IFBB pro standout Evan Centopani. This world-class competitor knows all the tricks about how to gain mass on the cheap. Join him on shopping day!