There are several fat burning compounds on the market today that work well of course when combined with a sensible diet and regulated exercise program. One should become formally educated on all various fat burning substances before granting them a part in your supplementation regimen.

What Supplement Companies Are Doing...

Supplement companies have found many ways to replace the void created by the absence of ephedra from raised caffeine levels to extremely higher ma huang and guarana levels.

The supplement amount increases allow for the energy level increase that many persons find a necessity when in exercise mode. Many companies have placed a calcium/potassium salt and/or a fermented sage compound in place of the absent ephedra supplement in hopes that the product will help to move fat faster in the cellular process of weight loss.

The downside you ask? It has yet to be proved in humans though the compounds have shown an effect in laboratory rodents. The following compounds are used in the process of increasing an individual's fat burning process and of course should be taken after consulting a medical professional.

L-carnitine is a nonessential amino acid that is shown to have a dramatic effect on fat metabolism. This compound aids in the reduction of blood fats including triglycerides.

Carnitine is also responsible for transporting fatty acids across various cell membranes to the mitochondria. This cell feature is most commonly known as the cell engine or furnace of the cell. It is here that the fatty acids can be used as cellular energy to fuel the body.

Yohimbe and/or Yohimbine Hydrochloride (HCL) is commonly used to increase blood flow as well as libido levels other positives via use of this element have surfaced.

Use of this product has shown a decrease in fat synthesis in the body as well as an increase in fatty acid mobilization from fat stores in men and women (especially in the hip area). The combination of these two effects on the body indeed position this chemical herb as a viable aid in body fat loss.

Pyruvate is a compound that is found naturally in the body. This element is the end product of the metabolism of sugar and starch which happens within the metabolic process.

Pyruvate is normally used by athletes to increase endurance though studies show that it does speed up the fat loss process. This product works best when taken one half hour prior to exercise regimens.

Chromium is known in the science industry for it's ability to increase the sensitivity of the body's cells to the insulin hormone. Insulin plays a critical role in maintaining proper blood sugar and also stimulating thermo genesis.

Because of the ability of this product to increase insulin sensitivity within the body regular chromium supplementation has shown in studies to lower body weight yet increases lean body mass.

L-tyrosine is yet another nonessential amino acid that is shown to have dramatic effects on fat metabolism. Tyrosine is a precursor to catecholamines like norepinephrine and dopamine6, which are both integral to the body's fat burning processes.

Tyrosine works to increase and maintain thyroid levels thus aiding in the regulation of metabolic processes within the body.

Ma huang and guarana are two herbal compounds that have both been shown to increase the rate of fat loss. Both of these herbal compounds when used properly and in combination with the right companion herbs are safe and extremely effective.

These elements are normally combined with kola nut and white willow bark to promote fat loss as the mixture of all of the above stated herbs are commonly used in name brand fat products.

These fat products on the market have already combined these herbs thus taking the guess work out of combining them yourself.

A careful notice regarding overuse of these herbal compounds include:

Thus combining them yourself does need the influential guidance of a medical professional. 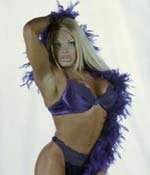 You wont need ephedra or any other supplements to increase
your heart rate after looking at these pics of Bethany Howlett!

There are many fat burning supplements and compounds on the market today as I have touched upon the few that I feel show the best results when taken properly and with a sensible diet and regulated exercise regimen. Always remember to consult a medical professional before taking part in any supplementation regimen.

Bethany turned pro in fitness at the 2000 TeamUniverse and placed top ten in professional fitness debut at the 2001 Jan Tana.