Low-fat is dead—and it's about time! Make up the caloric gap in your life the most delicious way possible—with these six embarrassingly simple full-fat delicacies.

To paraphrase an elite bodybuilder who loved his fast food, everybody wants to go all low-carb, but ain't nobody want to eat enough fatty-ass foods.

If you're training hard and cutting out filler—whatever your reason, no judgment here—the calories have to come from somewhere. And as you've probably discovered by now, protein isn't always enough to make up the difference. It's too spendy, too gassy, and unless you're one of the truly dedicated who can eat the same damned stuff six times a day, you quickly run out of ideas for preparing it.

Additionally, if you're doing the ketogenic thing, anything more than a moderate protein intake can actually pull you out of ketosis, as Dr. Jacob Wilson pointed out in his ketogenic FAQ. The solution: You need fat, and occasionally, you need it in concentrated doses. These six treats will deliver it.

Get over yourself. You can handle the calories, or you can't—that's your business. Overdo any of these in the short term and your guts will probably let you know before your waistline does. Or you just won't want to eat any more of them. That's the beauty of fat.

Why replace your cheap carbs with fats?

Cheddar cheese is a favorite villain for the "let's make a list of what not to eat" set, because it's one of the fattiest of the mainstream cheese varieties. Just a little of it will give you, like, half of your totally arbitrary recommended daily intake of saturated fat. Boo effing hoo. 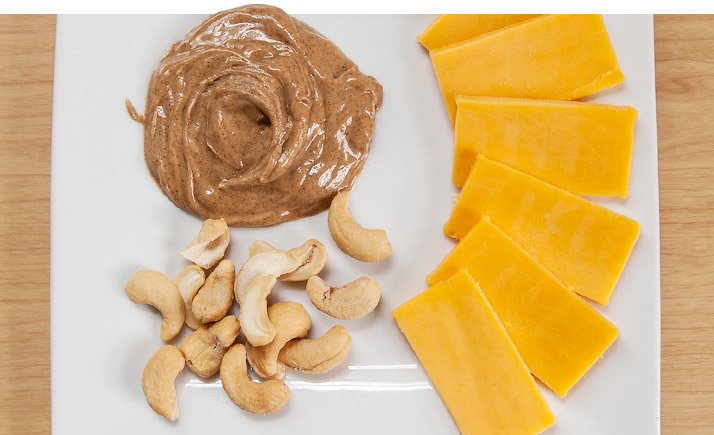 It doesn't have to be cheddar that you pick here, of course, but there's something about its tartness that pairs perfectly with the creaminess of a nut butter.

If you're going to do this, you need to get over your old fat hang-ups. No way around it. More practically, I can't be sure of this, but the list of people who have polished off an entire brick of full-fat cheddar cheese in a single sitting is probably pretty small. And all of them were weirdos whom you (probably) don't need to worry about becoming like.

It doesn't have to be cheddar that you pick here, of course, but there's something about its tartness that pairs perfectly with the creaminess of a nut butter. Almond, peanut, sunflower seed, macadamia nut—they're all great butters, and the best part is that they get tastier the fewer ingredients are in the jar. But cashew is the choice today, because cashews. (And yes, the old standby kid snack of roasted nuts and cheese is an acceptable substitute here.)

Word to the cheesily wise: British and Irish cheddar varieties, like my fave the Lancashire Bomb, usually contain higher fat and protein content than their skinny-fat American counterparts. And they're cheaper and easier to find than you might expect. Hooray for the Costco cheese aisle.

Full-Fat Cheeses You Need To Make Sweet Mouth-Love To

Just what it sounds like. Behold the perfect dessert!

Step one, buy a half-gallon of heavy cream that's about to expire, so you'll feel obligated to drink it all, lest you waste your precious five dollars. Step two, refrigerate it for long enough that some of it solidifies into wonderful little fat chunks up along the top of the carton. Step three, pour it into a cup. There will be chewing involved, but you'll quickly learn to like that.

About 4-6 ounces (or half of a small juice glass using the eyeball method) is usually enough; any more, and you run the risk of your stomach raising the white flag. Dump in enough cinnamon to make it taste all cinnamon-y, but not enough nutmeg for it to taste all nutmeg-y. Mix in a drop of vanilla extract if you're of a mind.

Drankin' Bacon in My Cup

This greasy brilliance was discovered while trying to find a way to avoid doing the dishes on a camping trip. There I was, staring at a dirty pan of hot grease and bacon bits. It was all about to go to waste, so I decided...not to waste it. There's your recipe. 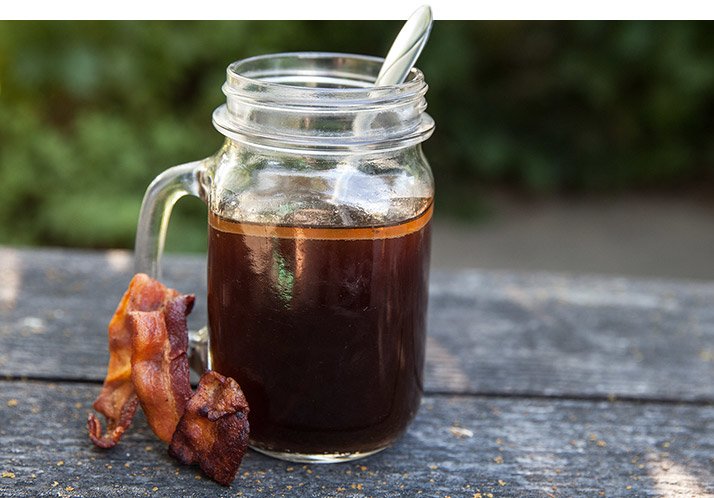 This greasy brilliance was discovered while trying to find a way to avoid doing the dishes on a camping trip.

Before you raise your hand and start educating us all about bulletproof coffee, yeah, it's a thing. Honestly, the combination of butter and coconut oil in coffee isn't as delicious as I had hoped. Your experience may vary, but for me, it was a bit too...shampoo-y. Plus, there are many among us who like our nice black coffee too much to gunk it up with a bunch of other flavors.

So how is this any better? Because this isn't something for your precious first coffee of the day. This is for your "sure, why not" second or third cup—the one where you don't use your fancy beans or time-intensive preparation. The one that, when camping, might accidentally get a little bourbon spilled into it.

As someone who reads things on the Internet once informed me, bulletproof coffee was actually inspired by Tibetan yak tea, a heady Himalayan concoction made of yak butter, tea, and salt, all hand-churned into a thick slurry. Up on the rooftop of the world, it's normal for people to refill their bowl with it dozens of times a day.

The upshot: People who live, work, and labor in high elevations understand the importance of efficient fuel sources. Gym Jones founder and former elite mountaineer Mark Twight relays in his book "Kiss or Kill: Confessions of a Serial Climber" that he and his fellow climbers would guzzle straight olive oil while scaling remote peaks. Their hair and skin became so glossy, rescue teams could see them twinkling from the air at night. OK, not really.

You can try to approximate the Tibetan yak tea original using one of the handful of online recipes, but let's be real: You won't do it justice. Instead, if you're approaching bedtime and haven't had enough glorious fat for the day, just add some high-quality butter (varieties from grass-fed cows, like Kerrygold, are best because they have more, um, fat) to a savory caffeine-free herbal blend like rooibos, chamomile, or my favorite, Steven Smith's Meadow, which contains both.

How much butter you put in is up to you and your taste. Once again (just because I like typing it): You can whip it, but you don't have to.

Nobody eats enough vegetables. And why is that? Because nobody puts enough fat in their vegetables. 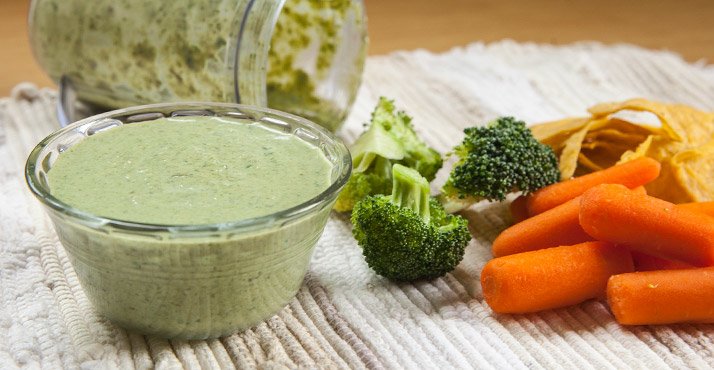 Kids will eat this, by the way. Make fat the new sugar in your house.

Heat up some butter or ghee. Sauté an onion and a clove of garlic in it with ample salt and pepper. Throw in a heaping handful of something green, and once it's tender, dump it in the nearest blender. Add some full-fat ricotta or yogurt, and once it's blended, slam it directly onto the counter like the guy in the "Will It Blend" videos.

Kids will eat this, by the way. Make fat the new sugar in your house.

Fish has been a secret portable fuel source for hardworking athletes and hardworking workers for a long, long time. But even within the canned community, there's a divide. There are those who pour the oil out—for shame!—and those who see it as the gift from the gods that it is.

I'm not asking you to slurp it out of the side of the can or anything. Instead, mash up the little sardine fillets—with the skin, of course—until the oil is well-mixed with the fish, like a really greasy tuna salad. Add hot sauce to taste, and then taste.

To maximize fat intake and deliciousness, choose sardines that are packed in olive or other oils. Portuguese and Spanish varieties are always a good choice. Avoid all brands that insult the precious fish by packing them in water.

Give Fat A Chance

Before you post some snotty retort about heart attacks waiting to happen, consider doing something more useful with your hands, like using them to shuttle fat into your mouth.

The U.S. government's Dietary Guidelines Advisory Committee has come around on saturated fat. So has the Academy of Nutrition and Dietetics. Even formerly fat-phobic Time Magazine issued a buttery mea culpa last year. These were just three; expect plenty similar about-faces in the months and years to come.

Fat—saturated and otherwise—is not the enemy. Decades of misinformed dietary guidelines are the enemy. Excess sugar is the enemy. Inactivity is the enemy. And yes, people who expect you to survive while eating things that don't taste good are also the enemy.

Eat enough vegetables. Eat enough fat. The rest is up to you.