4 Reasons Grass-Fed Beef May Be Worth Your Buck

Are you wasting your money on grass-fed meat, or is this premium beef worth the extra buck? Discover the nutritional benefits of grass-fed beef here!

There's a war raging over your beef, and you may not even know it! In spite of research spanning over 30 years, the battle between grass- and grain-fed has left many people scratching their heads as to whether or not the higher price per pound of grass-fed is worth their purchase.1

A longer time to harvest, the more ethical treatment of the animals, and less total end-product are a few of the many reasons that grass-fed beef costs more than its grain-raised counterpart. For example, a farmer raising and selling grain-fed cattle can break even by selling beef at $1.18 per pound, but the same farmer raising grass-fed beef needs to sell at $2.22 per pound. 2

Despite the added cost, the main argument for grass-fed beef rests on the fact that the feed provided to cattle has a profound impact on the nutrients within the meat that we end up eating.3 Grass-fed animals are leaner and provide a beneficial fat profile.

Check out this quick overview to help you decide if grass-fed beef is worth your hard-earned green!

It was once believed that saturated-fat intake was directly linked to an increased risk of heart disease. However, recent research has squashed this statement and placed the focus more specifically on the type of saturated fat consumed.4,5

There are multiple variations of saturated fat, but what's important to know is that some are associated with a higher risk of disease than others. Grass-fed beef has been shown to be much higher in a "neutral" saturated fat, one that does not have an impact on cardiovascular-disease risk.6 This fatty acid, also known as stearic acid, is significantly elevated in grass-fed beef.7

Grain-fed beef displays a nutrient makeup higher in the saturated-fat variants specifically linked to an increased risk for heart disease than grass-fed beef.

Grain-fed beef, on the other hand, displays a nutrient makeup higher in the saturated-fat variants specifically linked to an increased risk for heart disease. This risk is related to the negative impact saturated fat has on total cholesterol levels. So, should you look for a second job so that you can afford this grass-fed goodness? Not so fast.

Consuming grain-fed beef 1-2 times per week probably won't have major negative implications to your health—especially if you eat well and exercise regularly—but if you're able to work in the occasional grass-fed option, you'll be doing your body and taste buds a major favor!

Grass-fed beef may actually contain less overall cholesterol than grain-fed beef. Cholesterol content correlates with the fat stored in the animal's muscle (intramuscular fat). Since grass-fed animals are leaner than their grain-fed colleagues, there is less intramuscular fat, and most likely less cholesterol in the meat.8-10

Building off my previous point, remember that not all saturated fats are created equal. Saturated fat impacts total cholesterol, and in the case of grass-fed beef, there is less of this cholesterol-spiking saturated fat, which equates to a decreased risk of health complications compared to grain-fed beef.

Dietary cholesterol isn't necessarily bad, but if you're consistently eating other high-cholesterol foods such as eggs and shrimp, you may want to think twice when making your next beef buy.

Omega-3 fatty acids are particular fats that may have a positive impact on cholesterol and heart health. Significant sources include salmon, flax seed, and walnuts. Excessive intake of omega-6 fatty acids can cause an internal inflammatory response that can lead to a slew of health complications. Vegetable oil, salad dressings, and baked goods are high in omega-6 fatty acids.

The typical American diet contains between 11-30 times more omega-6 versus omega-3 content.11 A key consequence of consuming too great of an omega-6 to omega-3 ratio is a considerably elevated risk for numerous health problems, as well as an increased risk for depression, reduced memory with age, and increased likelihood of developing Alzheimer's disease.12,13

There are far more sources of omega-6-rich foods compared to omega-3 options, but prioritizing omega-3 intake can help minimize the gap. Even though there appears to be no difference in omega-6 content between grass-fed and grain-fed beef, grass-fed does offer a greater amount of omega-3 fatty acids.14-16

Data from multiple studies has concluded that the average ratio of omega-6 fatty acids to omega-3 fatty acids in grain-fed and grass-fed beef is 7.65:1 and 1.53:1 respectively.7,14-16 Consistent consumption of grass-fed beef may help to diminish the difference between omega-6 and omega-3 consumption, setting you up for better health!

CLA is a polyunsaturated fatty acid (PUFA) that has been shown to offer several benefits related to health and body composition. Specifically, it has been associated with a positive change in body composition via the reduction of fat storage.17

Due to the nature of the feed, grass-fed beef has a much higher percentage of CLA than grain-fed beef. The formation of CLA occurs in the stomach of cattle before being deposited in fat stores. Production relies heavily on bacterial growth at a specific pH. Grain-heavy feed alters the ideal pH, thus decreasing the production of CLA, and the subsequent amount found in our meat.18-19

It's important to note that most research has been carried out in animal models; however, researchers suggests that 3 grams per day of CLA is the minimum amount to elicit a positive effect in humans.20 Choosing grass-fed beef will help you get one step closer to achieving this daily goal, since a 4-ounce portion provides anywhere from 500-800 milligrams.21 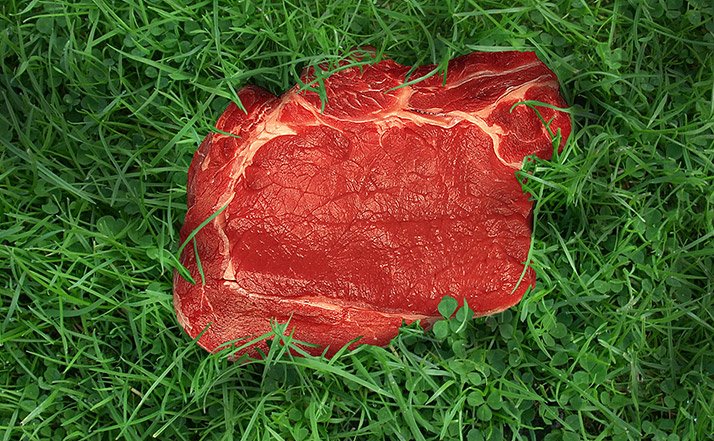 Due to the nature of the feed, grass-fed beef has a much higher percentage of CLA than grain-fed beef.

Don't have a cow when deciding whether or not you need to buy grass- or grain-fed beef. If you're eating red meat multiple days per week, you may consider choosing grass-fed beef to reap the benefits of less saturated fat and cholesterol, and more omega-3s and CLA. However, if you're like most people who only occasionally eat red meat, you need not worry about spending the extra dough, but you may still benefit from eating a 50-50 split between grass- and grain-fed beef.