The Nutritional Keys To Staying Jacked After 40

You can still earn impressive results in midlife and beyond, but it won't happen without making the right choices. Lift, eat like this, and you'll set yourself on the path to success!

Getting old sucks. It sucks even worse with a dad bod.

I’ve managed to walk into my forties and still find jackeded-ness living on the other side of it, but it wasn't by accident. When my friends were in their late teens and early twenties out drinking and partying, I was slaving under the iron and reading every book and magazine I could get my hands on to find out what I needed to do to build more muscle and strength. I caught up on the partying later, but was able to do so filling out my shirts rather than looking like an overcooked hot dog at a Boy Scouts camp.

The upshot for you if you're under, let's say, 30: Every day you spend lifting, and not gleefully self-destructing, will pay off with dividends later.

But that's not the only moral to the story. Even if you’re rocking a glorious dad-bod right now and spent your youth avoiding the weight room with the same degree of fervor with which Keith Richards has avoided sobriety, you can still get in the best shape and health you’ve ever been in. And you can still add muscle and lose fat at the same time, and turn a head or two at the pool.

Jacked In Midlife And Beyond: Your Game Plan

If you’re a veteran of the iron, and have laid down the foundation of muscle over the years, you may still have to change your mindset to keep progressing. For example: it’s probably a good idea to let go of some terms like “bulking" and "cutting”. You’re not in high school anymore, so dropping those from your vocabulary is a step in the right direction. Words like "maintenance" and "tiny incremental gains" are your new mantras.

Why no more glorious, epic bulks and brutal cuts? For anyone in their late 30s and over 40, there is a bit of bad news. There are plenty of things going against you to either get jacked, or stay jacked, after 40. At this age, your hormones aren’t exactly throwing a frat party and getting wild. It's simply easier to build muscle in your late teens and 20s, is because the hormonal response to training stimulus and eating is far more magnified.

That’s because up until your late 20s, you’re still in adolescence, biologically speaking. The prefrontal cortex of your brain is still in its final stages of development, which is in part to blame for all of the poor decision-making, emotional highs and lows, and inability to see the forest through the trees that you’ll later look back on, or already have in disbelief. That seek-and-destroy, no-fear mindset goes hand-in-hand with your body being at its peak to win-out over the competition for a mate. The healthier and more fit you appear, the greater your chance for success. Yep, you’re at the apex of the animal kingdom after all, so it shouldn’t surprise you that your body is programmed to be in its best condition for winning against your competition and being a reproductive machine during this stage of sexual development. With that comes greater testosterone and anabolic sensitivity, among the many other benefits of adolescence.

After about 30, most people have achieved biological adulthood, which is kind of nice way of saying you’ve boarded the slow train to your inevitable mortality. With it, the average adult realizes a gradual decline in their response to exercise and protein ingestion. There's even a term for this: anabolic resistance. In your 40s, hormones can be far less responsive to training stimulus, and to turning excess calories into muscle.

That's the bad news. Now here's the good news: There are things you can do to help stave off the wasting process, keep or even put on some muscle, and potentially keep you out of a pine box for just a bit longer.

The first thing is, well, lift. Do it right, and do it often. My new program Jacked in 3 on Bodybuilding.com is a great choice. Second, begin to take chronic inflammation way more seriously in your nutritional choices. 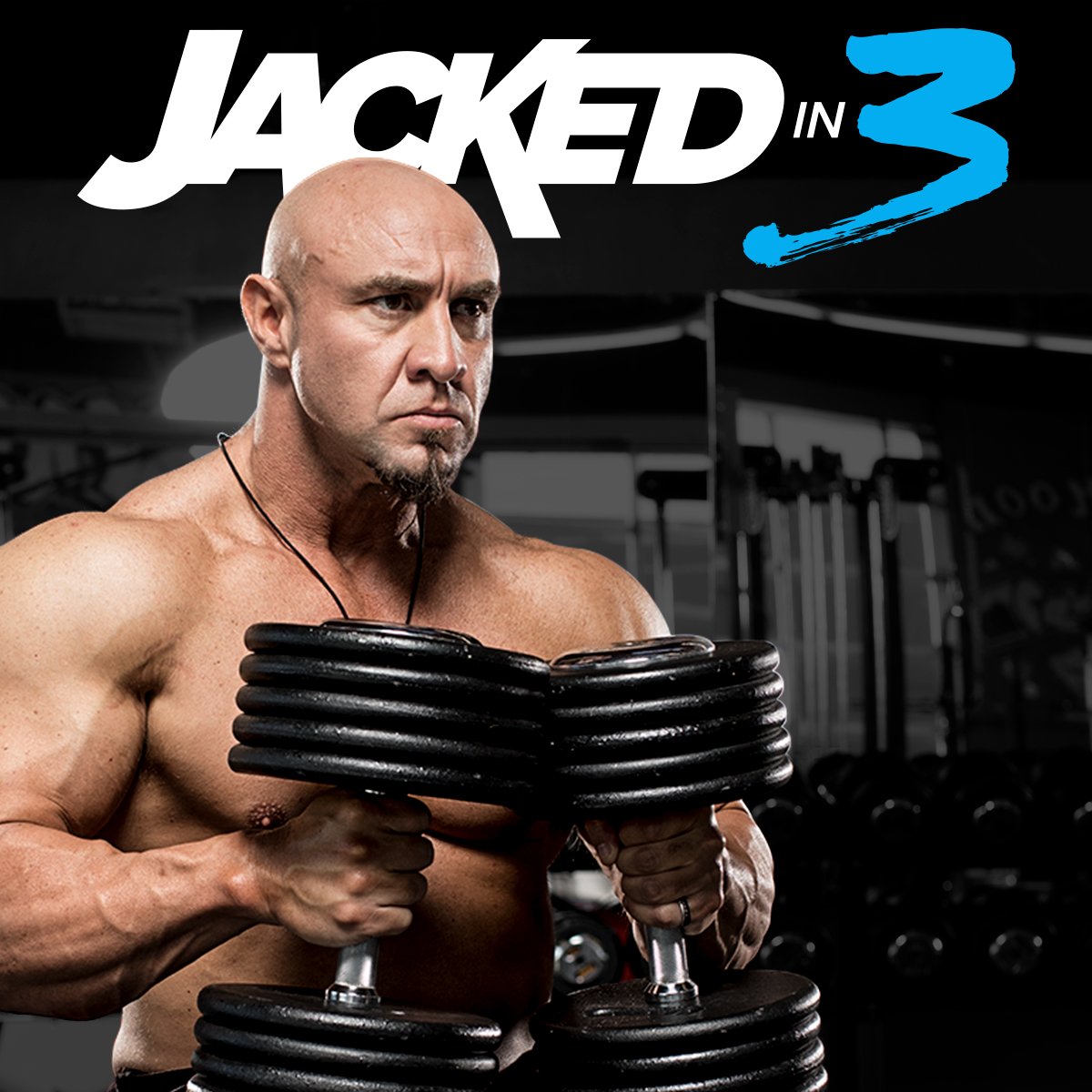 Jacked in 3
Check out Paul Carter's Jacked in 3 plan by joining BodyFit and unlock over 60 premium fitness plans from the world’s best trainers, athletes, and experts. Sign up today!

Rigorous exercise and all physiological stressors, whether physical, environmental or psychological, creates an inflammatory response in your body. However, your ability to rapidly reduce that inflammation and get your body systems back in balance is a key aspect in not only exercise recovery, but also maintaining a robust immune system and reducing the effects of aging. Fail to bring inflammation under control and the effects on your body and health can be devastating.

In fact, chronic low-grade inflammation has a connection in some way, shape, or form to just about every major disease plaguing humankind. It can help create the conditions for fatty liver disease, obesity, to type II diabetes, heart disease…I could mention plenty of others, but let's just says it's a "who’s who" of the actors who usually play the Grim Reaper.

From a muscle-building or muscle-maintaining standpoint, it is also the enemy to one of the strongest muscle building hormones we have: insulin. At this point, you may forever associate insulin simply with diabetes, but its effects are far wider-ranging than that. Insulin is anti-catabolic, and helps shuttle amino acids and glucose into the cells for growth and recovery, reducing muscle protein breakdown. In other words, it's essential if you want to actually benefit from your physical training, and not just get beat up by it.

Inflammation plays a central role in promoting insulin-resistance in skeletal muscle.[1] When you're insulin-resistant, it becomes very hard to retain muscle or promote increased muscular growth.

Fortunately, there are ways the older lifter can reduce inflammation and give themselves an anabolic leg up. These are my top three.

If you had to settle on one supplement for your old man muscle arsenal, don't make it some random-ass T-booster you heard about on the radio or saw in a pop-up ad. Make it fish oil. Fish oil falls under the "just take it already" category of supplements at all ages, but particularly in midlife. Why? It does so many wonderful things that improve health, wellness, and both muscle-building and muscle retention. It’s been proven to be a strong reducer of chronic inflammation, and appears to positively affect the muscle protein synthesis response to exercise.[2-4]

Yes, it’s possible to get all of the same benefits from eating salmon a few times a day, but taking at least 2-3 grams per day of combined EPA and DHA essential fatty acids from fish oil capsules or spoonfuls of liquid keeps you off of Pinterest looking for recipes that require cooking skills you don't have, equipment you don't want to buy, and spices you're probably going to screw up in your attempts to make “Kentucky Fried Salmon."

You’re a man in in his 40s. Not Martha Stewart. Know your role. Take some fish oil.

It's easy to dismiss this as the latest fad diet, but it's looking increasingly legit, and here's why. Oxidative stress is one of the biggest drivers towards putting us into the old man zone, and accelerating the aging process and chronic diseases. Like inflammation, exercise and other physical, environmental, or psychological stressors acutely amplify oxidative stress. Bringing your body back into balance quickly is key to success in the gym, and against time.  Intermittent fasting is a proven strategy to reduce both oxidative stress and chronic inflammation.[5-7]

The most common method within fitness circles—and for many, the most sustainable—tends to be the 8:16 schedule of eating all meals during an 8-hour window, and then fasting for 16 hours. Whatever hours you decide to base this around are mostly irrelevant so long as you’re adhering to some window of fasting and eating.

The clock doesn't tell the whole story, though. Personally, I believe that nutrient timing is still an important part of muscle retention to maximize the effects of muscle protein synthesis and reducing muscle protein breakdown. So whatever window you decide to use, make sure you get in a solid meal before and after training.

I would never advise a younger lifter who is trying to build serious muscle to implement an intermittent fasting protocol, because there’s nothing anabolic about a young man not eating for 16 hours. But remember, we're no longer bulking and cutting. For the older lifter who is at a point where he’s more committed to holding onto muscle, as well as taking advantage of every principle that can improve his heath, reduce inflammation, and increase insulin sensitivity, intermittent fasting can be a fantastic addition to the arsenal.

Much like intermittent fasting, this falls under addition by subtraction. Your food selection plays an important role promoting or reducing inflammation, and a diet containing lots of overly processed foods that are high in sugar content and trans-fat, is highly linked to promoting increased levels of inflammation.[8]

By extension, the elimination of these types of foods is pivotal in keeping chronic low-grade inflammation away. A great eating lifestyle to adhere to is one that is primarily built around vegetables, fruits, and lean protein sources. In other words, now, finally, is the time to get serious about eating like an adult.

So what about carbs? Sure, have them. But pick carbohydrate sources by asking if they came out of the ground, and didn’t have 19,392 other man-made additives to them to make them hyperpalatable.

I'm not going to be the one to say "nothing out of a box;" after all, rice, oatmeal, and quinoa come in boxes, too. But I have never seen a field of Cheez-its being tended to. And there’s a reason why Lays dares you to see if you can just eat one. You can’t. No one can. Potato chips are delicious, but they're probably not the best choice for filling out the base of your nutritional pyramid.

Turn Heads As The Years Turn

Start digging around, and you'll find endless ways to combat chronic inflammation, some wise, some incredibly stupid. But this list is a solid foundation to build off to do so. Giving yourself a leg up on fighting the aging process, keeping or building the muscle you labor for in the gym, and reduce the problem of anabolic resistance.

We can’t beat father time. He’s currently undefeated in the standings. But we can take the fight to him for as long as possible and do our best to look sexy while we duke it out.

Paul Carter is a strength hypertrophy coach and the founder of Lift-Run-Bang, an online coaching website.