Unearth the truth about flexible dieting, sustainable fitness and nutrition, and popular myths with expert advice from Dr. Layne Norton!

Power: "If It Fits Your Macros" (IIFYM) adherents and flexible dieters have recently flooded the net and social media with pictures and hashtags claiming that eating some junk food won't affect their body composition. In short, what is flexible dieting, or IIFYM, and is it the best nutritional strategy for a strength athlete's performance and aesthetics?

Dr. Layne Norton: Unfortunately, flexible dieting has gotten a bad rap as a diet for people who only eat "junk." That is not the point of flexible dieting. The point of flexible dieting is consistency. Diets fail because people can't be consistent. They try to diet forever and inevitably gain all of the weight back. Studies show that diets have an almost 95 percent failure rate for long-term weight loss because people can't maintain whatever lifestyle they used to diet the weight off.

The research also shows that more than half of people end up putting on more weight than they lost. They end up with a higher body fat percentage than before they even started dieting. This phenomenon is known as "body fat overshooting." The point of flexible dieting is to have long-term sustainability. Allowing people to eat the foods they enjoy in moderation makes them less likely to cheat and binge eat—or worse, go totally off of the wagon and put 10 or 20 pounds back on in a few weeks of vacation or during the holidays (which is all too common).

The point of flexible dieting is to have long-term sustainability.

The person who can lose weight on 300 g of carbs per day and 80 g of fat can afford to have a little fun with their diet and eat a Pop-Tart or some ice cream and still hit their macronutrient and fiber targets. But the person who has to be on 100 g of carbs and 40 g of fat per day in order to lose body fat isn't going to be able to eat very much junk because they're constrained by their macronutrient budget. In that way, flexible dieting is self-regulating. Still, I've seen people get ridiculously shredded with flexible dieting. They were able to be consistent because they didn't feel deprived.

When people ask me how often I cheat on my diet, I say that I haven't had a cheat meal in almost seven years because, even if I have a slice or two of pizza, I just fit it into my macronutrient targets and move on. I don't feel the need to eat the whole thing. I know that I have gotten the leanest I ever have in my life having ice cream every week during prep. And, this past year, when I dieted down to the 93 kg weight class for USAPL Raw Nationals, which I won, I ate ice cream almost everyday. I just accounted for it in my caloric budget.

Power: The fitness industry always seems to ebb and flow, moving in circles and trends. The '90s were all about low-fat dieting, but more recently, high-fat, high-protein, ultra-low-carb diets rule the strength world. What would you tell an advocate for high-fat diets? Is there a place for them as someone with strength and aesthetic goals?

Norton: Well, I think it's all about what is maintainable. As a coach, I don't look at things from a 12-week point of view. I look at them from a career-long standpoint. If a 12-week ultra-low-carb diet gets athletes in great shape and helps them lose weight for a meet, then that's great. But, if they can't maintain it and later on put on more fat than they lost in the first place (which I tend to see happen), then it's a net negative. Now they have to diet even harder for the next meet and possibly lose more strength in the process. It can easily become a vicious cycle of ultra-restriction followed by massive regain.

Most people cannot maintain very low-carb diets indefinitely. Thus, I prefer diets that allow more flexibility so that people can lose weight and have a much easier time keeping it off. For example, I ate a very balanced, flexible diet to come down for USAPL Nationals. I never cut out any foods, I just controlled my portions. I ate a little ice cream nearly every day!

I went from 223 to 202 the morning of Nationals and I gained 44 pounds on my total because I did it slowly.

I went from 223 to 202 the morning of Nationals and I gained 44 pounds on my total because I did it slowly. This morning, I was 205 pounds. It's over a month after the meet, and I'm maintaining that weight. It will be easy for me to stay in the 205 class and continue to gain strength because I did it slowly and in a maintainable way. If I had to crash diet, then I likely would have rebounded very badly because crash-dieting drastically lowers your metabolic rate. The research shows that slow and steady wins the race.

Power: It is rare to find a strength athlete who is satisfied with their body weight. People always want to drop a couple of pounds or want to put on more size and muscle. Where do you suggest an athlete who has never tracked calories or macronutrients begin?

Norton: Someone who has never tracked macros should just start at the beginning. They don't have to change anything they're doing—just start tracking to see where they currently stand. I remember when I was young and couldn't gain weight; I never tracked my macros. I was shocked when I started to track them, because I swore I was eating almost 4,000 calories per day and doing exactly what the magazines told me to do. The fact of the matter was that I was barely over 2600 calories! No wonder I was a hard-gainer. 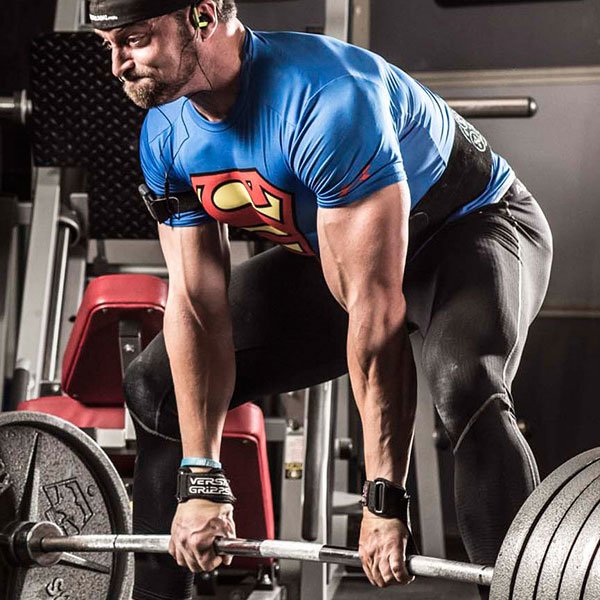