Your day is too important to be fueled with kids' stuff, cheap carbs, or worse yet, nothing at all. Try the breakfast that elite athletes rave about: a serving of meat and a handful of nuts!

We've all heard people say that breakfast is the most important meal of the day. Lost in that simple saying, though, is what exactly is on the plate or in the bowl—i.e., if it's a proper breakfast. "Proper" of course is dependent upon your goals, but I'm going to take a fitness tack here and assume that your goals are, in no particular order, feeling your best and looking your best. Sound about right? 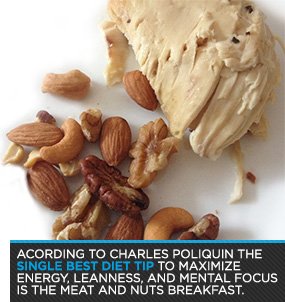 I was at renowned strength coach Charles Poliquin's five-day hypertrophy camp last year when one of the attendees asked Poliquin for his recommendation for the single best diet tip to maximize energy, leanness, and mental focus. Charles' response was immediate: the meat and nuts breakfast.

I nodded along with him; this wasn't the first time I'd heard of it. While I was preparing for the 2011 WBFF World Championship competition, my contest coach Ben Pakulski introduced me to this visionary way to start off the day. I can tell you that I enjoyed improved mental focus, higher energy, and fewer cravings than ever before. And since I stepped onstage at a personal best 4 percent body fat, with the leanest and hardest physique I've ever sported, I've been a believer.

Why is the meat and nuts breakfast so effective? Since it's only composed of two items, it's easy to break it down and answer that question point by point. 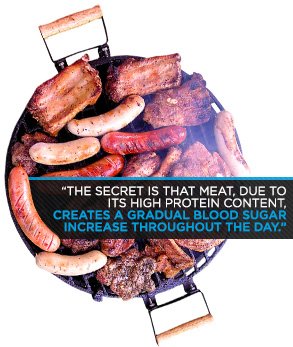 I find it amusing when my friends look puzzled seeing me prepare a steak or some chops for breakfast. But every athlete, businessperson, or busy mom who has ever tried and gotten back to me had to admit they felt increased energy levels, more mental focus, and fewer cravings when they had a portion of meat before heading out of the house.

The secret is that meat, due to its high protein content, creates a gradual blood sugar increase throughout the day. Sugar and other simple carbs may give you a quick boost, but their lack of protein means that good feeling won't last. A 2011 article published in the journal Obesity looked at this phenomenon by studying two groups of obese men: one that ate a high-protein diet, and the other that consumed normal-protein diets. The subjects of the study reported having fewer hunger pangs, less fixation on food, and less late-night snacking than the lower protein group.

Several studies have also focused on employee productivity and the attention patterns of children in relation to their morning eating habits. They've concluded that the energy and mental focus benefits of a high-protein breakfast aren't only felt in the morning, but extend through the afternoon as well.

Nuts are wonderful sources of healthy fats that help your body maintain the blood sugar level stable for long periods. A study was published in mid-2011 in the journal Diabetes Care Journal, in which they studied the value of 2-1/2 oz. of nuts versus a muffin of the same caloric value. Dr. David Jenkins, a leading pioneer of the glycemic index, conducted the study, which was constructed of three groups of type-2 diabetics.

The first group added 75 grams of nuts per day to their diet, the second added a protein-fortified whole-wheat muffin, and the third added half of a serving of each to their diet. After three months, the first group showed dramatic improvements in their LDL (the "bad" cholesterol) and healthier cholesterol ratios overall than the other two groups. That same group also showed significantly improvements in the HbA1c test of blood glucose control.

This was a convincing vote of support for the ability of nuts to support not only heart health, but balance blood sugar. In real life terms, stable blood sugar translates to consistent energy and alertness, rather than staggering around in a hypoglycemic glaze looking for an easy carb fix.

There's a lot of talk about food allergies these days, but one thing that rarely gets mentioned is the risk posed by overly simple, repetitive diets. Food allergies are often born from repeated consumption of the same protein source, such as beef, whey, eggs, tuna, casein and tuna—all staples of a typical bodybuilding menu.

Allergy testing is a good way to learn how different foods may affect you, but if testing isn't available to you, varying your protein sources is a simple and often effective way to decrease your vulnerability. In the event you develop a food allergy, it isn't uncommon for such allergies to cease after 2-6 weeks, in which case you may be able to reintroduce that protein source in moderation.

Varying your protein sources also provides you with the opportunity to embrace new and exotic protein sources that can offer impressive nutritional profiles. As an example, a typical 100 gram beef hamburger will supply 7.8 grams of protein, while a calorically equal serving of buffalo meat will provide 19.9 grams. If you can find it, wild meat also offers distinct benefits over domestic meat, including a healthier balance of omega-3 and omega-6 fatty acids.

Rotate a few meat sources through your diet for variety: alligator, buffalo, black bear, elk, kangaroo, ostrich, venison, wagyu, wild boar, and yak. If poultry is more your thing, try duck, goose, guinea fowl, pheasant, quail, and squab. You may not have heard of all of them, but somebody in your city probably has. Check ethnic markets and butcher shops, and keep an open mind.

You won't have to search nearly so far to track down a variety of nuts. Pretty much any store will carry at least seven varieties, such as almonds, cashews, Brazil nuts, macadamia nuts, hazelnuts, pecans, and walnuts. They can get expensive, but once you've got your price radar working you can buy in bulk and store up.

Here's a six-day menu of a typical meat and nuts breakfast to try out: 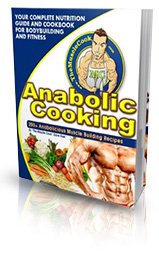 A cooking tip: For the omelet, add a dab of coconut oil, 2 whole eggs—organic, of course—and a big handful of fresh spinach to a frying pan and cook it up for about five minutes. Add 5 grams of fish oil to improve your insulin sensitivity.

I know it may not be practical for everyone to try to find six different meats every week. At minimum, try to find 2-3 different combinations to rotate through every month. Any less than that can get stale pretty quickly.

If you're looking for more combinations, I recommend checking out Anabolic Cooking, by Dave Ruel, aka The Muscle Cook. It's a great online cookbook for bodybuilders and includes dozens of fantastic dishes like salmon burgers, sun-dried tomato salmon, turkey-bacon-wrapped scallops, London broil, bison burgers, Jamaican pork and many others that are suitable for a meat and nut breakfast rotation. Just add nuts!

Can I Have a Whey Protein Shake Instead of Meat? ///

It'd be easy and convenient to say "sure," but it's not the same. A study published in the The British Journal of Nutrition in mid-2011 showed this when they investigated the differences between whole food protein and protein drinks.

The researchers studied two groups of teens, one of which consumed high-protein whole food breakfasts, and the other protein drinks. Four hours later, both groups were offered an all-you-can-eat lunch, and even though both groups had reported equal levels of satiety after breakfast, the protein drink group consumed a full third more calories at lunch than the whole food group.

The takeaway is that whole foods provide better control of appetite. Supplements have their place, but breakfast is a time for food.

Nuts definitely aren't for everybody, so if they're not an option, reach for low-glycemic/low-fructose fruits. A few examples include:

Just remember that you should always go for organic fruits when possible. This is especially the case when buying strawberries, because they're more heavily sprayed than almost any other fruit.

Aside from this, the beauty of the meat and nuts breakfast is its simplicity. Nevertheless, there are other tweaks you can make to gear it to your specific goals. If you're skinny and trying to build muscle, add 1-2 cups of carbs to your breakfast, as outlined in my book No Nonsense Muscle Building. But if you're trying to burn fat and lean out, the meat and nuts breakfast is enough on its own.