Wide World Of Protein: Five Protein Sources That Are Leaner Than You Think

Tired of the same old critters? A menagerie of natural protein sources is dying to make it onto your plate.

All these protein-rich staples made it into your diet because they're—wait for it—lean. However, they don't own the patent on leanness, and if you limit yourself to just eating them, all the hot sauce in the world won't help excite you about dinner.

Yes, I said it—it's acceptable to be excited about dinner! If that's news to you, consider working one of the following lean protein sources into your rotation.

First off, a quick lesson: Venison is the meat; deer is the animal. Technically, "venison" can actually refer to any type of wild game meat from wild hare to reindeer, but it basically means "deer meat" in today's society. So if you're aching for pronghorn antelope tenderloin, order it by name. Go on, I dare you.

The main advantage that game animals have over domestic farm-raised animals is that their food doesn't come to them—they have to go find it. That may not sound like much of an advantage, but all the extra exercise makes for a meat that is lower in total fat and calories, while still packing all the protein of beef. A diet of grasses also makes wild meat higher in omega-3 fatty acids and lower in omega-6 fatty acids than farm-raised meat.

The small amount of fat in venison is found underneath the skin and is usually removed in the butchering process. This makes a lean protein source even leaner. A three-ounce serving of deer meat contains about 3 grams of fat and 26 grams of protein per serving. A single egg has more fat than that.

During game season, health-conscious hunters can obtain enough preservative-, hormone-free, and steroid-free meat to pack a freezer for the year to come. Ask around to see if any of your friends hunt, and if they're willing to let you tap into their reserves. Farm-raised game meats and venison jerky can also be purchased from some grocery stores, but as you might expect, they don't offer the same health benefits as their wild cousins.

If you've ever seen the price of beef tenderloin in the store or on a menu, you may have thought that all versions of the T-word were high-end gourmet splurges. Not true! Pork tenderloin is an affordable cut of pork, and it happens to be one of the leanest and most tender cuts.

Meat from the side, back, and belly of the pig are higher in fat; they're the ones that are cured and processed to make salami, bacon, and sausages. By comparison, cuts from the loin—including tenderloin, pork loin, and center-cut pork chops—are relatively lean and packed with protein. A three-ounce serving of pork tenderloin contains 3 grams of fat and 22 grams of protein per serving.

One of the great things about the tenderloin is that it naturally comes in the perfect size to make a dish for two, or to cut into half for one person. You may be most familiar with pork tenderloin breaded and fried in a sandwich, but this cut tastes even better in low-fat preparations like roasting, grilling, or stewing. Pan-fry tenderloin medallions with onions and peppers seasoned with hot paprika. You'll be an instant fan. 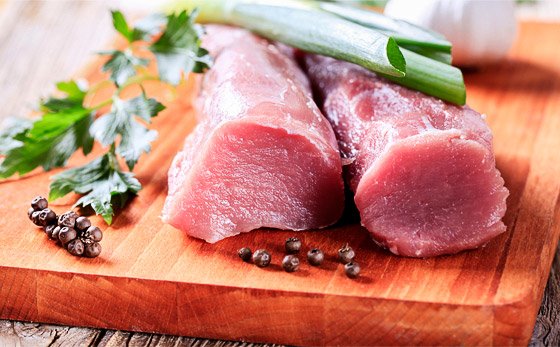 "Cuts from the loin are relatively lean and packed with protein."

Veal may not be on your radar when you go to the meat market or grocery store, but if you're looking for the tenderest, most flavorful, leanest cut of beef possible, take the time to find it.

Veal is a distinct cut of meat that comes from male calves slaughtered at a young age. It generally comes in two varieties: milk-fed, and pasture or range-fed veal. You might mistake milk-fed veal for pork when you see it in the store, because its creamy pink color doesn't exactly scream "cow." Pasture-raised veal is darker in appearance and slightly tougher, but differs little in taste or texture.

If you're squeamish about the infamous "veal crates," free-raised veal is another option worth investigating. Free-raised calves aren't kept indoors, and they're usually fed a mixture of grass, milk, and maybe grain.

No matter where you get it from, veal is a flavorful meat that lends itself to a wide range dishes. Braise a shank, saute a tenderloin, or stew a veal shoulder—there's no going wrong. You may not believe it right now, but soon you'll be that person who goes around asking people, "Do you eat veal? You really should." 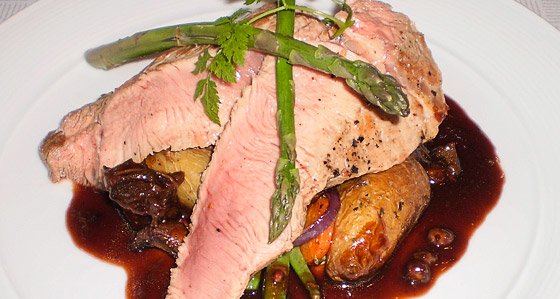 "Veal is the tenderest, most flavorful, leanest cut of beef possible."

Greek yogurt is gaining popularity among fitness enthusiasts, and rightfully so. Aside from having a richer and thicker texture than many traditional yogurts, it also generally has higher protein content. It mixes well with both sweet ingredients and savory flavors, and can help make everything from breakfast dishes to salad dressings a little creamier and more substantial.

What is popularly called "Greek" yogurt has been strained in a cloth, which removes most of the whey. The result is a consistency similar to sour cream. The Greeks seem to get all the credit for straining right now, but the truth is that cultures all over the world have their own strained yogurt varieties that are worth checking out. Middle-eastern labneh, Mexican jocoque, and Indian chakka all offer high protein and unique creamy tastes, although their fat contents can vary.

A serving of plain, nonfat, Greek yogurt contains 15 grams of protein and 0 grams of fat. You may find yourself eyeing the sweeter, flavored varieties at first, but consider giving unflavored a chance, too. Many people start mixing in fruit, but soon enough, they just have a scoop of tangy unflavored yogurt as a side dish alongside their dinner. Don't knock it 'til you try it. 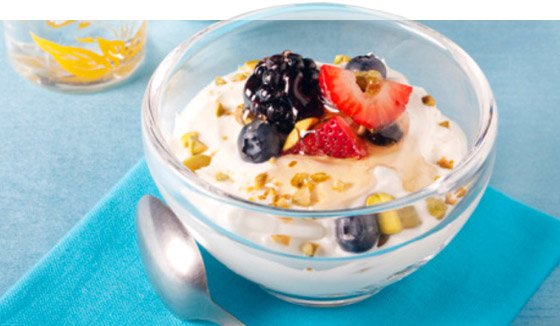 "A serving of plain, nonfat, greek yogurt contains 15 grams of protein and 0 grams of fat."

You may see this horseshoe-shaped cut of beef under the name "sirloin tip steak," but don't be fooled: It's not the same thing as a top sirloin. It is a versatile, economical meat that can add a protein punch to an incredible range of dishes without roasting your checking account. Just a three-ounce serving packs 26 grams of protein with just 8 grams of fat.

Round tip steak comes from the often-overlooked hindquarters, or round, of a cow. Unlike a round roast, which still has some marbling, round tip steaks are about as lean as beef gets. This has some drawbacks in addition to the clear advantages. First and foremost, you need to be careful about overcooking it, because it can get dry. Once your grilling chops are up to snuff, you'll have an easy time making stews, kabobs, fajitas—and yes, straight-up steak—with round tip and similar cuts like eye of round, top round, and bottom-round steaks. 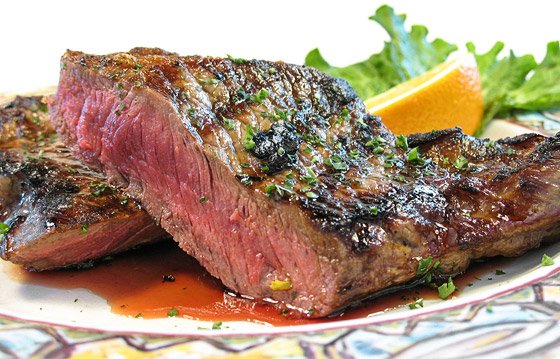 "A good marinade can also help to make your steak the star of any meal."

Round tip takes well to both broiling and grilling, but I recommend taking the time to marinate it before cooking—overnight, if possible. This tenderizes the meat, while also allowing you to add flavors to create your perfect marinade. Once you've got your own recipe, it's the type of thing that gets passed down for generations.

A good marinade can also help you to make your steak the star of any meal. For instance, steak salad: "Hmm, what a nice change of pace." Steak salad with steak marinated in garlic, red wine, Dijon mustard, and a little balsamic vinegar: "Oh my god, this is so good. Please tell me there's more!"

Healthy beef and pork recipes don't have to be dry and tasteless! Try our lip-smacking healthy recipes and get sufficient protein, all the while reaching your fitness and appearance goals!

11 From Heaven: The Top Fitness Snacks!

Got the munchies? Here's our pick for the 11 best healthy snack options so you won't bust your physique.

Michael is a Registered Dietitian who is committed to helping others improve their health and ultimately reach their nutrition and wellness goals.