Everything You Know About Fat Is Wrong

For years now, fat has gotten a bad rap. This misunderstood macronutrient can actually provide a wealth of health benefits. It's time to show fat some love!

Thankfully, the war on dietary fat is almost over, but it hasn't been an easy fight. We can look as far back as 1977, when the U.S. government first told us to follow low-fat diets and minimize saturated fats to reduce the risk of cardiovascular disease, cancer, high blood pressure, and everything in between. What followed was a monumental shift in the food industry toward promoting low-fat foods, slapping low-fat claims on any and every food in sight. Low-fat water? I'll take that!

Interestingly enough, this did nothing to slow down the rates of heart disease, obesity, and type 2 diabetes in our country. In fact, these top the list of chronic diseases in the U.S. So maybe fat isn't the enemy.

After battling decades of fat-bashing, it seems as if the U.S. government, health professionals, and athletes are finally coming to our senses and appreciating fat as an important macronutrient with a myriad of functions and health benefits. With a growing interest in higher-fat diets, it's time to set the record straight when it comes to fat and your health.

Understanding Fats: Back to the Basics

Let's be clear: We need fat in our diet, but not all fat is created equal. Understanding the different types of fat—and knowing which ones are most beneficial—is just as important as including them in your diet. 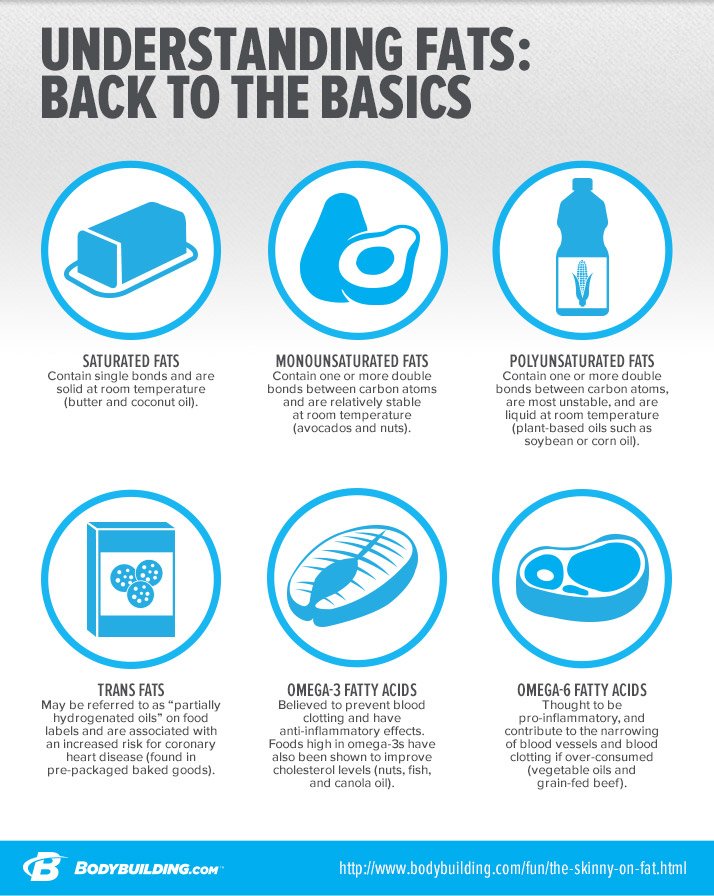 Simply put, fatty acids are carbon atoms linked together like a chain, with either a single or double bond between each carbon.

Many so-called experts associated saturated fats with the buildup of plaque in arteries and cardiovascular disease, although more recently this association has been called into question. A study published in The American Journal of Clinical Nutrition presented results from a symposium of nutrition researchers, concluding that insufficient evidence exists to suggest that replacing saturated fat with unsaturated fats reduces the risk of cardiovascular disease.1

Naturally, fatty acids are almost exclusively found in the cis formation (a double bond in the carbon chain, giving the molecule a bent shape). Commercial hydrogenation adds hydrogen ions to fatty acids, causing a straightening of the bond. This process has primarily been used to prolong the shelf life of products and reduce refrigeration requirements.

Trans fats, which are commonly found in pre-packaged baked goods—and which may be referred to as "partially hydrogenated oils" on food labels—are associated with an increased risk for coronary heart disease.3,4 Although trans fat are more regulated now than they were 10 years ago, they are still prevalent in processed foods.

What makes an omega-6 different from an omega-3? Nothing more than the placement of a double carbon bond in relation to a methyl group. Pretty nerdy words, but the placement of the double bond has a big impact on its function in the body.

Foods high in omega-3s have also been shown to improve cholesterol levels.

In fact, the difference almost makes the two types polar opposites, in that omega-3 fatty acids are believed to prevent blood clotting and have anti-inflammatory effects. Omega-6 fatty acids, on the other hand, are thought to be pro-inflammatory, and contribute to the narrowing of blood vessels and blood clotting.

In this light, the omega-6:omega-3 ratio appears to a big player in inflammation, and general health. Depending on who you ask, the standard American diet has a ratio of anywhere from 12:1 to 20:1. A ratio closer to 5:1 or lower may be more beneficial for cardiovascular health.5

HDL, often termed the "good" cholesterol, scoops cholesterol from the blood and arteries, delivering it to the liver to be excreted. Although the cardioprotective effects of HDL are a bit unclear, high levels of HDL are generally associated with a reduced cardiovascular risk and potentially act as an anti-inflammatory.6,7 Until medical science provides a solid answer on HDL—which may take a while—aim to keep HDL levels above 60 mg/dL.

LDL, often termed "bad cholesterol", transports cholesterol to cells in the body to be used for a variety of functions. Unfortunately, this can also lead to a buildup of cholesterol in arterial walls, increasing the risk of atherosclerosis and cardiovascular disease. Ideally, LDL levels should measure below 100 mg/dL.

The Benefits of Healthy Fats

I don't care what IIFYMers say: Having a fried Oreo hardly provides the same amount of quality fats as a grilled salmon fillet. Obviously, the Oreo is delicious, but if your goal is to get more beach-ready rather than develop metabolic syndrome, drop the greasy stuff and stick to high quality oils, nuts, seeds, and avocados.

So despite being vilified by mainstream media, fat has stood the test of time and is finally starting to be respected as an important player in our health. Here's a rundown of some of the beneficial functions of fat.

Fats are energy rich, containing 9 calories per gram—more than twice the amount in carbohydrates and protein. Stored throughout the body, as well as the liver and muscles, fat serves as a large energy reserve that can be tapped into at rest or during low-intensity exercise.

How much energy, you might ask? The average 150-pound male with body fat between 12-15 percent will have 80,000-100,000 calories stored as fat. Compare that to only about 2,000 calories stored as glycogen from carbs. All of this stored fat creates an abundant energy reserve that can supply 60-80 percent of energy at rest.

Armor for Your Body

Ever seen "Flubber?" Notice how Robin Williams can jump out of a 10-story building onto his feet and flubber allows him to bounce back unharmed? 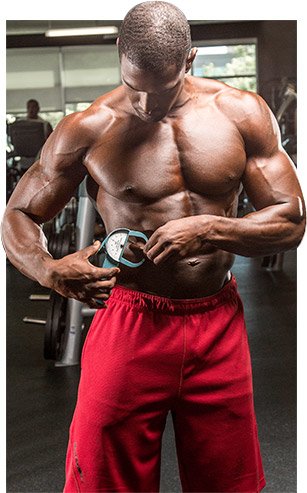 This is essentially what visceral fat does for your organs. While it's unfortunately not neon green like flubber, it's gel-like consistency cushions our internal organs, particularly during falls or during contact sports.

It should be noted that, just like too much flubber was bad for Robin Williams, too much visceral fat may be bad for us. Increased visceral fat has been linked to insulin resistance and an increased risk of cardiovascular disease.8,9

Subcutaneous fat—the stuff located underneath the skin, which gets pinched during a skinfold test—acts an insulator, preventing heat from escaping the body.

Additionally, it helps maintain thermoregulation (the ability to regulate and maintain core body temperature) and subsequent organ and cellular function.

Finally, fat is also used in the formation of myelin, a substance surrounding nerve cells that improves the speed and efficiency of nerve conduction.10

The importance of this substance is most evident in the types of diseases that develop when it is destroyed or damaged, such as multiple sclerosis.

Vitamins A, D, E, and K are fat-soluble vitamins. Without adequate fat, these vitamins couldn't be absorbed, transported, or used, and deficiencies would ensue.

Why does a rib-eye taste so much better than the strip sirloin? Probably due to the fat content! Fat offers a distinct texture and flavor to enhance the taste of food. And if you're cutting calories, don't drop all of your fat. 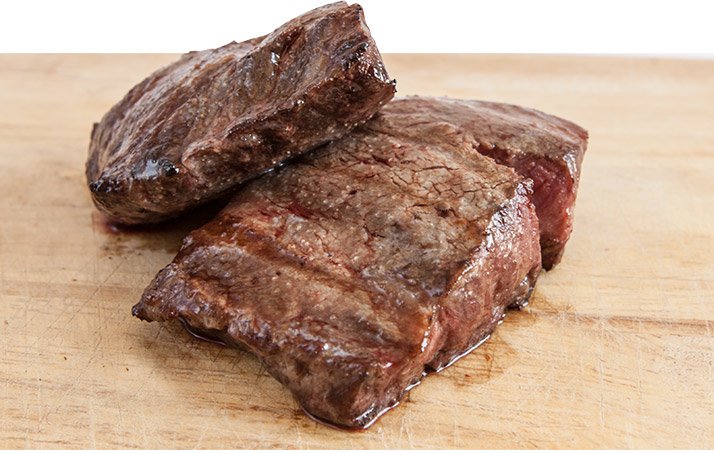 Fat offers a distinct texture and flavor to enhance the taste of food.

Fat is a calorie-dense molecule, with 9 calories per gram, so it takes a little longer to digest, providing satiation for a longer period of time.

So there you have it: the skinny on fat. Here are my recommendations for fat intake, and where you can find your best sources for quality fat.

Ciaran received his M.S. in Kinesiology and is working towards a doctorate. He holds certifications through the ACSM and CISSN.