Can Overtraining Lead To Cancer?

Overtraining wears down the immune system and does not allow the body to fully recover. Find out how too much of a good thing can actually hurt you.

In our present society, people will do what ever it takes to have a "killer body." This obsession for a "hot bod" has some people taking an approach that until recently was only available to the rich and famous... plastic surgery. Others are trying for body perfection the old fashion way... hour upon hour in the gym. But is spending all this time in the gym punishing their bodies to the brink of exhaustion and overtraining each day wise? In their quest to make themselves "perfect" are these excessive exercise habits increasing the risk of cancer?

Exercise And The Immune System

From the viewpoint of immune function, the optimal training regimen is one of low volume, reports Dr. Roy Shephard and colleagues at the University of Toronto in Canada. Their findings are published in a recent issue of the Journal of Sports Medicine and Physical Fitness.

Previous studies have shown that an excess of athletic activity can actually depress immune function. "According to this viewpoint, light training is supposed to enhance the immune response," the Canadian researchers explain, however, larger volumes of training (overtraining) have a depressant effect, leaving the individual temporarily more susceptible to a depressed immune system.

"Previous studies have shown that an excess of athletic activity can actually depress immune function."

The human body regularly produces free radicals, unstable molecules that react with stable molecules and cause cellular damage which may contribute to heart disease, cancer, premature aging, and an impaired immune system. During intense exercise, free radical production is greatly increased which is associated with oxidative damage to the muscles, liver, blood, and other tissues.

Under normal conditions, free radicals are generated at a low rate and neutralized by the body's well-developed scavenger and antioxidant systems. However, if overtraining triggers a greatly increased rate of free radical production, the number of radicals may exceed the capacity of your cellular defense systems. The unrestrained extra outlaw molecules (free radicals) then assault your cell membranes, with a resulting loss of cell viability and an increase in skeletal and muscle damage.

The damage to and inflammation of tissues that often accompanies exhaustive exercise are the most apparent signs of free radical activity. This phenomenon is typical in long distance runners, tri-athletes, and bodybuilders.

One of the world's leading authorities on antioxidants and free radical research, Dr. Ken Cooper, states in his book titled, Antioxidant Revolution, "There are at least two ways free radicals are produced during intense exercise. The first involves an electron leak, which may occur during exhaustive exercise. The increase in the body's oxygen consumption during a heavy workout can increase 10 to 20 fold or more."

The second way free radicals are produced during exercise is through ischemia reperfusion.

Dr. Cooper continues, "When you exercise intensely, the blood flow in your body is shunted away from the organs that are not actively involved in the exercise process, such as the liver, kidneys, stomach, and intestines. Instead, the blood is diverted to the working muscles, including the heart and legs. During the shifting of blood flow, a part or all of the body regions or organs not involved in exercise will experience an acute lack of oxygen (known as hypoxia). When the exercise is completed, blood rushes back into the organs that were deprived of blood flow."

This reperfusion process has been linked to the release of an excessive amount of free radicals.

So How Much Is Too Much? 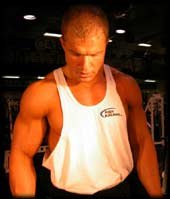 Some exercise physiologists have postulated a J-shaped relationship between physical activity and susceptibility to viral infection. According to this hypothesis, regular moderate physical activity enhances immune responses, reducing susceptibility to the common cold and certain cancers. In contrast, excessive exercise, such as an ultramarathon or a period of very heavy conditioning, suppresses immunity for several hours to a week or longer, creating a brief period of vulnerability when the risk of upper respiratory tract infections (URTIs) - and the possibility of cancer - is increased. (The Physician and Sportsmedicine - Vol 27 - NO. 6 - Jun 99)

Does this mean that one should stop exercising? Of course not! What this information tells us is that one should not "overtrain," especially the non-drug-assisted athlete. Overtraining wears down the immune system and does not allow the body to fully recover. The bottom line is if you don't fully recover, you will not make progress in your training and may end up making yourself sick. Not only that, but you may burn out too. How many times have you seen a new "gung-ho" fitness enthusiast spending way too much time in the gym only to never see that person again after their enthusiasm burns out?

A more sensible approach is to view fitness as a lifelong activity that truly requires only a few intensive hours each week. Those 2-3 hour daily sessions in the gym are not only unproductive in the long run, but sooner or later this kind of commitment will be difficult for anyone to maintain and that's when you see the "throw the baby out with the bathwater" approach to fitness (meaning you would rather scratch your nails on a blackboard than go the gym). As with everything, the key is moderation.

The following checklist, developed by Dr. Neil F. Gordon of the world famous Cooper Institute for Aerobics Research, Dallas, Texas, should help you identify the symptoms of overtraining:

Proper nutrition is essential in maintaining the strength of the immune system. Nutritional deficiencies impair immune responsiveness and increase probability of one becoming ill. Recently, there has been a lot of attention paid to a group of vitamins called antioxidants. This group of vitamins consists of vitamin's E, C, and the carotenoids. The primary role of antioxidants is to stabilize highly active free radicals that cause cellular damage in the body.

Can antioxidants prevent cancer and help develop a body a Greek god/goddess would be proud of? Of course not. However, through proper exercise, adequate recovery time (8-9 hours sleep), a well-balanced diet and avoiding or limiting alcohol consumption, you can reach your full potential.

In conclusion, research has shown that brief, intense exercise is the best way to obtain a healthy, long-lasting body. Ironically too much of a good thing (overtraining) in your quest for body supremacy may compromise your health and well being.