Over Training Back In The Day.

If a little was good, then more was better. Makes sense in a way, but the body doesn't respond that way and at 65 you simply can't do that. Here's a little background on what I did and a sample workout program.

Overtraining Back In The Day

Ever since I can remember way back to the mid 60's, bodybuilders always had a tendency to overtrain. If a little was good, then more was better. Makes sense in a way but the body doesn't respond that way.

I can remember spending 2 ½ to 3 hours in just one training session, which was not unusual. It was a full time job plus you had to add in eating and rest. It really consumes the entire day. The body remained sore constantly and at the time the belief was if you're sore, then you're doing something and the muscles will grow.

We didn't accept the fact that we were always in a torn down state and not growing at all or at least very little. Plus if we weren't sore, then we didn't train hard enough as we needed to be sore every workout without fail. 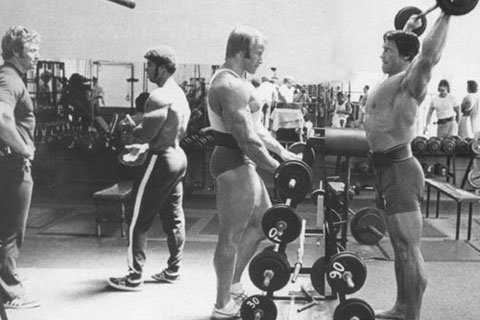 Click To Enlarge.
In The Past, If You Weren't Sore After A Workout You Hadn't Trained Hard Enough.

It became a vicious cycle that the more you trained, the leaner you became but the fat still covered the muscle. What was actually happening was that we were burning up muscle instead of fat and the muscles were retracting in atrophy, which left a fatty layer over them. Of course this meant that we must train even harder to get more ripped and instead of that happening, we were doing more damage.

So basically you killed the muscle temporarily and wiped it out. It's like a turtle's head and retracts itself, which causes the muscle to hide under a layer of fat like I said. It's deceiving and frustrating because you need to find the right balance of training and recovery. It becomes a sickness and a trap that most bodybuilders fall into. It's not in our mind set to draw back, cut reps and sets and let our bodies rest as we feel that maybe we'll get smaller.

When I trained with Arnold in the 70s, we would sometimes, not always do split sessions. We would do chest and back in the mornings and stomach, calves and forearms in the afternoons. We hit the beach in between those workouts, laying in the sun and catching a nap for our afternoon workouts.

This was an awesome lifestyle that most people don't have available to them but it was perfect for training as we were able to fit everything in one day and still recover for the afternoon workouts. 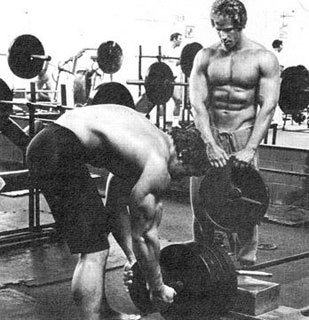 Click To Enlarge.
In The 70s Ric And Arnold Would
Occasionally Train Twice In One Day.

Luckily Joe Weider was paying Arnold and I was wrestling at nights, which gave us the income and freedom to allow us to live this lifestyle.

One summer the pollution levels were high in Los Angeles, which made it hard to train legs due to the heavy breathing. So we rented and oxygen tank and used it in between sets to give us more energy. It was amazing how it really worked and boosted up or strength and recovery. Ever since that time, I keep one in my garage for those days and go out and hook up for twenty minutes. It revs me up for the rest of the day.

Even though those days were a blast and training was the ultimate experience, I feel I wasted a lot of time in the gym when I could have been doing more productive creative things that I also enjoy. But the gym dominated my time like everyone else and I couldn't see past that. I don't think anyone can who's that involved in it. I'd love to go back and relive one day as in a time machine but with the knowledge I have now.

I'd take my camera and record those sessions. Back then the video camera wasn't even available and only the professionals usually came in to shoot photos. I feel fortunate that I did have a camera but should have taken more photos to share. Who knew that would be the Golden Era and who knew that my 58 Vette would be $60,000 now when I only paid $1100.00 back then? 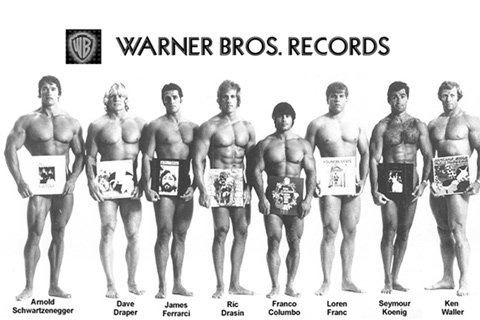 Click To Enlarge.
Who Knew That Would Turn Out To
Be The Golden Era Of Bodybuilding?

Over the years I changed my workout routines many times and experimented on old ones that worked and new ones that worked better. I remember when I first started and was able to do standing dumbbell curls for reps with the 65 lb dumbbells. I can't do that now but back then I limited biceps to 3 sets of 3 exercises and my arms grew like mad.

Later on in the years I was doing 15 to 20 sets per body part and I was in good shape but felt tired and overtrained. I was afraid to go back to the 9 set routine in fear that I'd lose size and that maybe I needed more as time went on.

But this is not the case now as I have found reducing all sets in all body parts has a great value on growth and recovery. I took a week off once and went to Hawaii in which I only trained one day. I ate well, lay in the sun and rested.

At the end of that week I returned to do a wrestling show and everyone told me that I looked bigger and more ripped. I thought it to be impossible but that week off did something right for me and changed the way I was thinking.

Now at age 65, it is harder to keep muscle mass but with so many good supplements out there and the technology, it's much better than it used to be. I've reduced my workouts to this below and found that it is less than an hour in the gym and I can retain and gain muscle on this program. It's similar to what we did in the 70's but just cut down a shade. 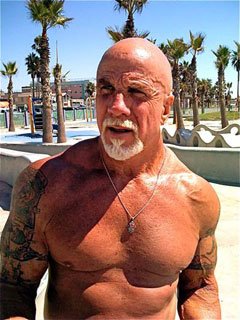 Click To Enlarge.
At Age 65 It Is Harder To Keep Muscle Mass, But By
Reducing His Workouts Ric Can Retain And Gain Muscle.

I repeat the same workout the following 3 days with 100 reps of abs every day.

Take note that I am limited on leg workout as I tore both quads in 2001 and had them repaired but they've never been the same. Plus I'm over due for a knee replacement and walking is a bitch at times. Hence the leg workout.

I'll get into diet at a later date but remember this, not only in workouts but every day life: "Less is more." Think about that and it really makes sense.

Training With Arnold Schwarzenegger, The Austrian Oak!
In 1970 I first met Arnold in the parking lot of Bill Pearl's gym in Inglewood, CA. Arnold was ok in the strength department, but not as strong as I was. Here's my reflection on what it was like training with the one-and-only Austrian Oak!

Not Recovering? Overtraining & Diet May Be The Culprit!
Overtraining can best be described as the state when an athlete undergoes a very stressful training regimen that he or she simply cannot recover from any longer. Learn more.

Less Is More!
Overtraining is one aspect of bodybuilding that is usually forgotten. This article outlines the damaging effects of overtraining.