Brian Yersky took everything up a notch and won the NPC Nationals, earning his IFBB pro card!

My training for the 2012 NPC Nationals and ultimately an IFBB Pro Card was simple and straightforward, yet methodical. Both off-season and pre-contest, it consisted of three components: diet, physical training, and mental training. In my opinion, the last one seems to be overlooked most of the time.

I've been a weightlifting fiend since early in junior high school. I guess you could call it "bodybuilding," but we all know it usually starts with training only chest and arms. I just wanted to be the biggest kid in school, plain and simple.

Training took precedence over sports. I was training during practice and even before games. My junior and senior years of high school, I attended class at Youngstown State University in my free time and began training with the 1-AA National Football Champions. Sports took a backseat to my training, and I went from a three-sport letterman to not playing anything my senior year. As I gained more education in the sport of bodybuilding, I began to train all muscle groups. 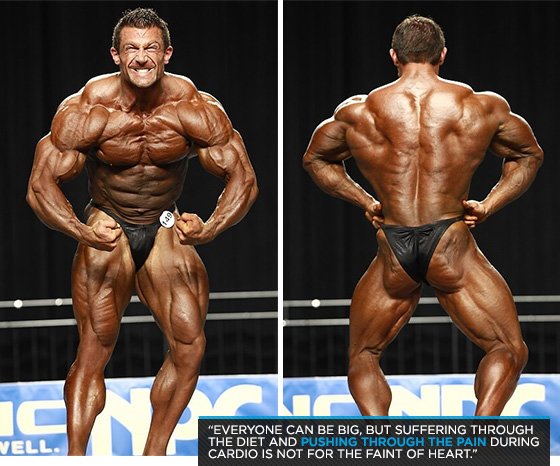 Today, I have my system in place, and I was able to stay on course all the way through the 15-week contest prep. The result was that on my second try, I was able to win the 2012 Overall National Title and my pro card. Now I'm training, full-steam ahead, toward my 2013 IFBB Pro debut.

The mental aspect can consist of so many different things, but basically it's whatever fuels you to accomplish your desired goal. It is easy to start with a strong mental frame of mind. The challenge lies in carrying that through the end.

Staying motivated to train has always been easy for me. After high school, I kept training religiously every day with my high school football coach. There wasn't a day we weren't training. During this time, I established a good base and gained about 45 pounds in that time. I was 20 years old and weighing in at 215 pounds. I trained for the next two years, continuing to grow and weighing in at around 250 pounds. This is the point in which I began getting ready for a couple of shows, in the spring of 2005.

What changed this time around, seven years later? I pushed myself on cardio to the point where it physically hurt, and I kept the intensity there, knowing that nobody else was training like that. My goal was to be the most-conditioned. I learned through competition that conditioning separates first place and second. Everyone can be big, but suffering through the diet and pushing through the pain during cardio is not for the faint of heart.

You know you're doing something right when the harder it gets, the better it feels! 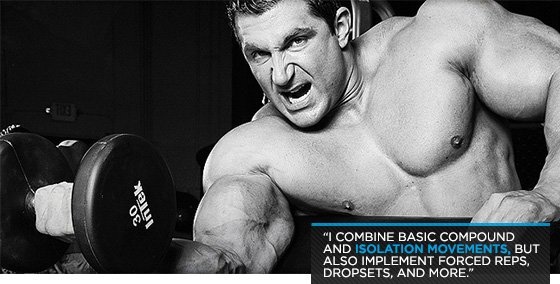 Year-round, I stick to a high-protein, low-carbohydrate daily diet consisting of 7-or-8 meals and two protein shakes. The only thing that varies is the quality and total calories. I consumed the majority of my carbs between mid-morning and mid-afternoon, around my training.

The protein sources I used for my contest prep were skinless turkey breast, flank steak, and tilapia. I got my carbohydrates through oats, potatoes, and white rice. I drank whey isolate protein shakes both upon waking in the morning and before bed.

Before and during my workout, I drank the Met-Rx Amped ECN Concentrated shakes, which contain creatine, glutamine, and BCAAs. When I was lacking both carbs and energy, this shake provided the pick-me-up I needed to effectively push myself to the max.