Let’s look for answers systematically (there are some, you know!). First, let’s talk about stress. Then about how it causes overreaching and overtraining, and what to look for as markers. Finally, how can we control it.

"Cumulative Microtrauma is the common link in all forms of overreaching/overtraining."

"In order to perform optimally, athletes must be adequately trained. However, if athletes train too intensely and/or too often, they may be susceptible to short-term and/or long-term decrements in performance capacity as well as myriad reported physiological, medical, and/or psychological symptoms of overreaching and overtraining.

This preamble appeared in the flier announcing the International Conference on Overreaching & Overtraining in Sport: Physiological, Psychological & Biomedical Considerations, held July 14-17 in Memphis. All I can say is, Mamma mia! Scientists -- those intrepid sleuths of Academia -- have a neat way of pontificating, don't they? I went to this conference, and learned a thing or two, so they do know some real neat stuff!

These questions may seem to you to be bordering on the trite, but I assure you they are not. They are the essence of training science as we know it! How much stress, what kind of stress and how often to stress, they are the questions for which all of us seek answers every day of our existence!

So let's look for answers systematically (there are some, you know!). First, let's talk about stress. Then about how it causes overreaching and overtraining, and what to look for as markers. Finally, how can we control it.

Every day of our lives we are all bombarded with a variety of stressors. More often than not, these stressors are of low enough "intensity" or so subtle that they don't affect us negatively in the short term. But most take their toll over time, you can book that!

What's worse, of those that do have a more immediate negative effect, their intensity is often compounded by the mere presence of the many other stressors. For example, any number of environmental stressors can have physical or physiological consequences. And one's psychological state is inextricably intertwined with one's biochemistry.

Consider some of the more common stressors, with an eye toward how they interact to aid or hinder our training efforts, and especially how they can affect overreaching and overtraining (defined below).

It is these two syndromes that interest me. What are the markers of each, are they actually different form one another, and how can we avoid or reduce them without actually "undertraining" in the process?

These questions are of critical importance to you in successfully achieving your maximum ability in sports, fitness or bodybuilding. First, let's take a look at the working definitions of the terms "overtraining" and "overreaching" that the scientists used at the Memphis conference.

Overreaching: An accumulation of training and/or non-training stress resulting in a short-term decrement in performance capacity with or without related physiological and psychological signs and symptoms of overtraining in which restoration of performance capacity may take from several days to several weeks.

Overtraining: An accumulation of training and/or non-training stress resulting in a long-term decrement in performance capacity with or without related physiological and psychological signs and symptoms of overtraining in which restoration of performance capacity may take from several weeks to several months.

Well! Circumloquitousness is not one of the attributes the conference organizers were lacking in, that's for sure! The definitions they used, in case you didn't see it, are identical except for the time factors involved. Both are induced by training stress. Not to worry! 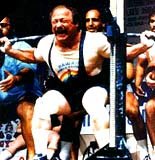 While, at first blush, the term "overreaching" conjures images of training-related trauma that causes tissue damage, in actuality that only happens to bodybuilders if they lift too much weight or do too many reps or sets. So, assuming that you don't go that far (few bodybuilders do on any consistent basis, primarily because fatigue intervenes), the low-level overreaching that bodybuilders typically do may be regarded as just another term for "adaptive overload."

It is what is needed to force an adaptive response to be initiated in your body. But, once you have overreached, you must pay attention to the GAS Law! Continued overreaching -- indiscriminate and continued overload over time -- eventually leads to the far more serious syndrome, overtraining. It looks like this:

There was consensus among most of the lecturers at the conference that training protocol errors are by far the most common factor in overtraining. While there is no question that the ill effects of too much training stress is easily exacerbated by the presence of concomitant stressors (menioned above), all we can do is attempt to minimize the others and control the training stressors.

Factors such as excessive training volume and training intensity, over time, can accumulate to produce decrements in strength, speed, explosiveness, endurance and skilled (motor) performance. So too can consistently poor nutritional status, lack of rest, choice of exercises, order of exercises, or lack of variation in exercise.

But, by the time you've observed such symptoms, it's too late. Consider these common examples. Is it better to treat obesity (the marker being excess storage of adipose tissue) or avoid it in the first place? Is it better to take your car in for periodic checkups or fix it after it's broken down (whereupon the marker becomes whatever it was that broke)? No, fellow iron freaks, the best approach lies in avoiding the appearance of such markers in the first place.

The markers of such performance decrements may vary among the following (to name a few):

These were among the markers of overtraining that were presented in the Memphis symposia. Clearly, each has its own set of stressful sub-problems (and therefore sub-markers) which may have potentially devastating effects on performance. These effects may manifest themselves over time or more immediately. But the main point is that, with few exceptions, these markers cannot be easily or readily identified by us -- we who train regularly.

Muscular or joint pain, appetite changes, psychological changes and decreased strength, speed and explosiveness are quite noticeable, however, and these markers are the main ones we've relied upon over the past few years to determine our own training status. The others, well, we've left them to the A-Team sleuths.

The Most Interesting Tidbits From The Memphis Conference

Peter Snell, Ph.D. (UT Southwestern Medical School):
Dr. Snell spoke about long, moderate intensity running being well tolerated and beneficial beyond any form of interval training in producing beneficial training effects among middle- and long-distance runners. He cited many examples of how interval training is abused by runners, and how it causes overtraining.

Special reference was given to the inverse relationship that must occur between volume and load if overtraining is to be avoided. He repeatedly insisted that it is typically "training mistakes" that carry us there. These mistakes are easily avoided through careful periodization procedures being put in place in one's training.

Michael Stone, Ph.D. (Appalachian State Univ.):
Dr. Stone presented interesting research he and his colleagues did with the members of the US Junior Weightlifting team (mean age of 18 years) at Colorado Springs. A serendipitous outcome resulted from the USOC's allotment of too little time to adequately force these youngsters into an overtrained state. Stone and his colleagues challenged the lifters severely by imposing a wicked triple-split weight training regimen upon them for a full week.

Instead, they tolerated the training exceptionally well as was evidenced in improved stress-related markers (physical and biochemical) across the board. After a three week taper period, 75 percent of the youngsters posted personal records (as compared to the control group, 75 percent of which posted lower-than optimal attempts). Overcompensation had taken place after this three week taper more than had occurred in the conventional peaking cycle used by the controls.

His response to questioning on this point was that US lifters simply do not train hard enough, making the point strongly that had he carried out the triple-split system much longer than the allotted week's time, they would probably have overtrained. Judging from the abysmal placing of the male contingent of US weightlifters in international competition, Stone is probably right about the lifters undertraining -- it certainly has been my personal experience that this is so.

Stone, as Kraemer, concluded that periodization is both the key to avoiding overtraining and improving peak performance. "Stress is Additive" was one of his central themes.

Furthermore, there were only a few significant changes in the endocrine markers Dr. Fry monitored, and they were quite different from those typical in endurance overtraining studies, citing some important differences between intensity-related stress and endurance training-related stress.

Mechanisms of the process were cited as being calcium ion influx, proteolysis and eccentric loading.

First, I heartily agree with Dr. Kibler's analysis. On the other hand, there's too little evidence to flatly accept or reject the others. I sat next to Dr. Stone during this presentation, and his comment was that Dr. Kibler had aptly described "overuse," although such homeostasis decrease and tissue disruption could also accompany overtraining.

I can't WAIT to be enlightened more on this distinction! Makes one wonder what the difference is between overuse syndrome and overtraining, and also between overreaching and overload!

In the talks over beers that ubiquitously accompany such symposia, it became quite clear to me that the only way overtraining among anaerobic (ATP/CP and glycolytic athletes) is ever going to be fully understood is:

By far the most commonly referenced cause of overtraining is "cumulative microtrauma." Cellular damage from an overreaching episode that gets worse and worse over time (remember, stress is additive). There are two ways to cope with cumulative microtrauma. You can avoid it, or you can treat it.

If you have to treat it, it's too late! You avoid it NOT by avoiding lifting or by avoiding a small amount of (normal) cellular destruction, but instead by not letting microtrauma accumulate! You do this through:

So, it all boils down to a simple plan. Most of the coaches of elite athletes in the USA will tell you that the single biggest problem with their athletes is not that they don't train enough, but that they train too much. I used to believe this too. Now, after years in the trench myself, I disagree.

I think they can tolerate MUCH more training and benefit commensurably from it. This is definitely true of bodybuilders. First, you must "periodize" your training adequately. All progress must be gradual and orderly. What you do must be predicated upon what you've just accomplished. No system of training is like a "silver bullet."

None will give you immediate success at your sport. Indeed, sticking to one program can actually hamper your progress. Take your time, be scientific and thorough, and -- above all -- follow the guidelines listed above. It's the best way to avoid overtraining!

Copyright © 2001 Fred Hatfield. All rights reserved. No part of this information may be reproduced or utilized in any form or by any means, electronic or mechanical, including photocopying, recording, distributing, or by any information storage or retrieval system, without permission in writing from the author. Inquiries should be addressed to DrSquat.com Webmaster, 419C Concord Street, Havre de Grace, MD 21078, USA. If you would like to offer these e-booklets on your site please contact DrSquat.com Webmaster at the address above or via e-mail at ebooks@drsquat.com

For complete information on all Dr. Squat's e-booklets, products, programs and more valuable information available to help you get stronger, faster, and healthier, lose fat or train for your sport, visit http://www.drsquat.com/.