Recent studies across the globe have revealed a shocking trend: Cinnamon is an insulin mimicker and can actually assist your weight loss regime! Learn more.

Cinnamon. The word evokes images of glistening sweet rolls fresh outta the oven on a Saturday morning. The smell of cinnamon alone can make the mouth water! 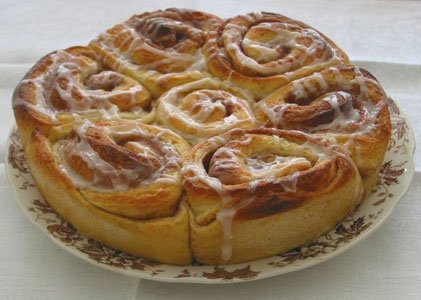 Click To Enlarge.
The Smell Of Cinnamon Alone Can Make The Mouth Water!

But what if the sweetness you enjoyed as a kid (and let's be honest, as an adult too!) actually contributed to your health? Could it be possible that one of the aromas associated with growing waistlines across the globe is actually good for you?

Recent studies across the globe have revealed a shocking trend: Cinnamon is an insulin mimicker and can actually assist your weight loss regime!

In past articles, I've discussed the role of insulin in the body and how it acts using the "buddy system" to create glycogen (read: energy) stores. However, too much insulin production by the pancreas (or insulin resistance by the body as a result of overexposure to artificial sweeteners can lead to an influx of insulin.

Think of insulin as a small child. When properly directed, it can be of great help to you! But, when it has nothing to do, it gets into trouble. Depending on the time of day and other surrounding circumstances, in your body's case—it turns into fat.

And since an insulin spike in your blood sugar can remain in the body for 5 hours, that's a lotta trouble for it to get into!

An Insulin Mimicker creates the artificial appearance of insulin to your body, still escorting the sugar you ingest into the appropriate areas of your body... but without the harmful spike that can lead to fat storage, insulin resistance, and even possibly Type 2 Diabetes!

In a recent article in the Journal of Agricultural and Food Chemistry, chemist Richard A. Anderson co-authored a study with colleagues at the Beltsville (Maryland) Human Nutrition Research Center and two universities.

In test tubes containing fat cells, the "polyphenolic polymers" associated with cinnamon bark were found to increase sugar metabolism a whopping 20-fold! (Source: United States Department of Agriculture Agricultural Research Service) Holy cow... What that does for your fat-burning potential!

Additionally, an article by Mary Shomon stated that a study performed with its subjects taking daily cinnamon supplements discovered, "Specifically, their blood cholesterol levels were lowered in the range of 10 to 26 percent, affecting overall cholesterol levels and reducing the LDL (known as the 'bad' cholesterol) but not reducing levels of HDL, the 'good' cholesterol."

In the past, medical sciences have used cinnamon as an early version of "pepto", citing that it improved upset stomach, diarrhea, bloating, and indigestion.

So how is it that this miracle supplement has been overlooked by the health and wellness community?

Can't See the Forest Through The Trees

A lot of the research on the miraculous usage of cinnamon centers around the diabetic community and the ability of this brown, powdery marvel to control glucose levels.

But a more recent development, the weight loss community has discovered this 'little known secret' and its advantages for glucose maintenance and began singing its praises.

It turns out that, due to the focus on its medical attributes and with the scientific focus being on healing those who suffer from "Metabolic Syndrome" (aka insulin resistance) that no one thought to look at cinnamon as a preventative measure rather than as a cure for an existing ailment.

What Is Metabolic Syndrome?

But think about it—most people carry excess fat around their midsection. That's no secret. However, the fat cells in your abdomen are particularly sensitive to insulin levels! Due to its close proximity to your vital internal organs, an entire network of blood vessels exist in your abdominal area, making it easier to store glucose levels in your belly area.

Cinnamon's glucose-regulating-powers may be just the thing you're looking for to get rid of that Buddha belly!

Cinnabon Is Still Not Your Friend

This doesn't give you carte blanche to run to your local Cinnabon and order one of everything on the menu! Like any supplement, moderation is key.

You can use cinnamon in your green tea each morning in place of a cup of coffee to get the antioxidants you need to remain healthy and keep that insulin in check!

Add one half teaspoon to unsweetened applesauce (yum!)

Don't forget about oatmeal, whole grain toast, or any other clean eating cereal! Sprinkle over peaches, apples, or pears! The options are endless! 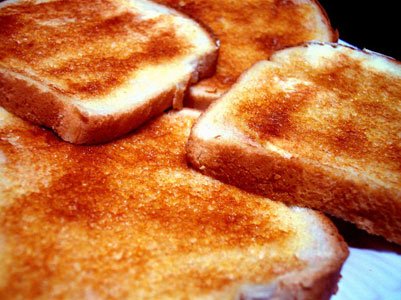 Click To Enlarge.
Cinnamon Is A Great Addition
To Whole Grain Toast.

Just don't take it first thing in the morning. Your blood sugar is already low upon waking and you don't wanna risk a hypoglycemic reaction, causing you to pass out during your morning workout!

This author adds it to the casein shake taken shortly before bedtime to counteract the meals eaten during the course of the day.

As with any new supplement, check with your doctor before you take something new—especially since this one deals in blood sugar levels, cholesterol, or if you're on diabetes medication because cinnamon may have an impact on your blood sugar!

If you choose to purchase cinnamon in supplement form, follow the label carefully and monitor your reaction to the pills.

If you notice a skin rash or "mild irritation" to the mouth and stomach area then you may have an allergic reaction and will wanna at least take smaller dosages of cinnamon (much like you use when cooking—1/2 a teaspoon at a time usually won't trigger an allergic reaction—but talk to your doc if you've got questions!)

Are You Getting Fresh?

Just make sure your using high quality cinnamon. Otherwise, you're wasting your time.

How do you know if your supplement is fresh? Smell it. If it's in pill form, you'll know it as soon as you open the bottle. If you don't get knocked over by the yummy smell, you're probably dealing with stale cinnamon. Higher quality cinnamon will "tell on itself" with the smell (lower quality will too in the opposite manner).

If you get it in powder or stick form, be sure to store it in a container, sealed tightly and away from the light.

Overall, you can sprinkle this magic on anything you're eating (especially if you're on a low-carb diet or a Keto run!) to ramp up all the hard work you're already putting into your meal plans.

And who knows, maybe a cinnamon roll on your allotted "cheat meal" every once in a while won't seem as bad as you think!

Rachel D. Young is a certified Fitness Trainer and Editor-in-chief of Beautiful Curves, a monthly newsletter full of recipes, exercise...