Big On A Budget: Mastering The Essentials With Jason ''Huge'' Huh

Chicken, rice, and eggs are the staples you need in order to grow. This is the plan that fueled IFBB pro Jason Huh when he exploded out of his teen years and added 100 pounds of weight!

Jason "Huge" Huh doesn't have patience for what you want. He's only interested in giving what you need. Huh's no-BS, all-results approach has made him a sought-after bodybuilding coach, and more recently, a natural fit as an Animal athlete.

This IFBB pro bodybuilder is a self-proclaimed foodie and good cook, but don't expect his menu from the Big on a Budget challenge to reflect it. When necessary, this beast is more than willing to live on the same staple foods that, years ago, kept him growing until the nickname "Huge" was inevitable.

The assignment, as always: Create a complete week's menu of muscle-building meals with nothing more than a $50 bill. Much like the Big on a Budget challenges with his Animal brothers Frank McGrath and Antoine Vaillant before him, Huh's cart in Marrazo's Thriftway in Trenton, New Jersey, reflected the eating style that first transformed him from a 175-pound lifter at age 18 into an unmistakable 270-pound bodybuilder at age 24.

You want variety? Go to Baskin Robbins. If you want to eat like an Animal, follow along closely and take some damned notes.

Keep It Simple, Keep It Clean

Huh's shopping bounty can be summed up in three words: Chicken, rice, and eggs. Sure, he tossed two puny apples into the cart with his final couple of bucks, but his singular goal was to spend every cent on basic protein, carbs, and fats. And he succeeded, spending all but 14 cents. If you want dessert, go buy a gumball.

"You're not eating for pleasure as a bodybuilder," he explains. "You're eating for purpose. And this is how you do it." 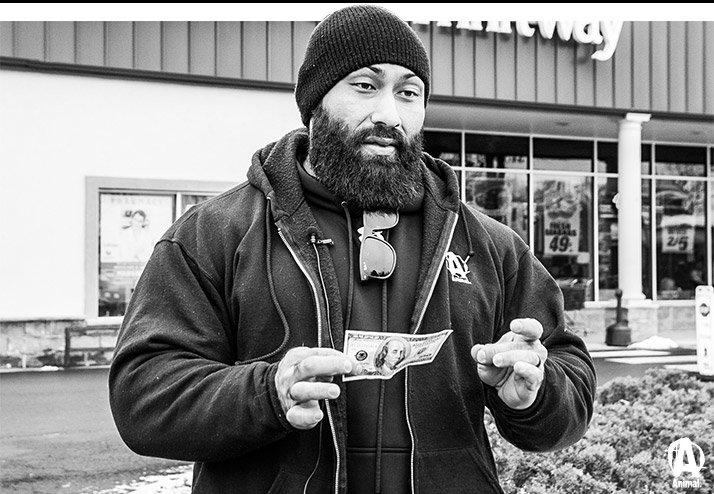 "Huh's singular goal was to spend every cent on basic protein, carbs, and fats."

But the devil, as always, is in the details. Huh worked on the line in a restaurant when he was an up-and-coming teenage bodybuilder—"the grill and sauté guy," he says—and after mastering the essentials of meat and food prep, he has been putting them to use six times a day ever since. So listen to what he has to say, and if the results don't taste good enough for you to stick to the diet, that's your problem, not the food's.

Chicken Avoid Dryness At All Costs

Huh laid 40 of his 50 dollars at the feet—or more specifically, the breast—of the almighty chicken. Aiming for the tried and true mark of 1.5 grams of protein per kilo of body weight per day, he made boiled breast chunks the centerpiece of no less than six meals a day.

Why boiled, you ask? Simple: It's the most foolproof chicken dish for a young lifter. "When you bake your chicken or you grill it, it tends to get dried out, especially if you don't know what you're doing," he explains. "I don't like eating dried chicken. I'm sure nobody else does. It might seem a bit bland, but it keeps things simple, and it keeps it somewhat chewable and swallowable."

"I don't like eating dried chicken. I'm sure nobody else does."

White rice is all the same, right? Yes and no, says Huh. First off, the packaging is different. That may not sound notable, but Huh used the more comprehensive serving information on an expensive bag of rice to determine exactly how much he needed for the week. Then he dropped that bag like it was hot and picked up an equivalent amount of a generic brand. Simple, but brilliant. Unlike the other bodybuilders who took the challenge, he was able to buy exactly the amount of rice he needed.

Huh also takes care with preparation. Knowing that the glycemic index number of white rice varies based on how much water it absorbs, he dialed back the H20 slightly to help him stay fuller longer and avoid the drastic white-rice blood-sugar spike six times a day. "Nice and fluffy—not too moist, not too dry," he commands.

Unlike Vaillant, who included a half-gallon of whole milk a day on his Big on a Budget Challenge, Huh is lactose intolerant. And he's not about to waste a moment of his day camped out on the throne trying to convince his body otherwise.

To get his fat fix, he purchased 18 whole eggs, all to be fried sunny-side up. The menu features three a day, laid on top of the rice in the style of classic Korean cuisine, where the yolk pulls double-duty as a condiment. With some hot sauce mixed in, that's surprisingly decadent. Just don't break the yokes—and be sure to check for broken eggs before you buy.

"I'm very particular about my eggs," he says. "A little salt, a little pepper, some hot sauce—those'll be beautiful."

Eating like this for a while will teach you a lot, Huh insists. Sure, you'll grow like crazy—provided you train like it, too—but you'll also learn how to look for little adjustments you can use to make a bland, repetitious meal palatable. First and foremost among these, Huh says, is using adequate salt. But the sweet benefits of sodium don't end there.

"Every bodybuilder, every athlete, needs salt in their diet," he says. "I know there's a big belief with certain bodybuilders in the industry that they don't salt their foods, which is totally ludicrous. Salt is an essential mineral. You have to have it, especially exerting yourself and sweating as much as you guys do. Male, female—I don't care who you are. You need to salt your food to stay properly hydrated and keep muscles and your brain firing properly."

Don't be that guy who goes for chintzy sodium-free zombie salt, either, Huh insists. Spring for some quality unprocessed sea salt, and use it without hesitation.