Fitness 360: Amanda Latona, The Next Stage

Life on Earth is better with Amanda in it. Follow her Fitness 360 for complete details on her training, nutrition, and supplement program!

There are a lot of pretty girls out there. We see them all the time. They flash brightly into our lives and are gone just as fast. But beautiful women—strong, rare, and elusive—remain in our lives forever. Amanda Latona redefines beauty. Once you see her, you won't forget.


Latona has skipped around the surface of the pop world since she was a teen of the '90s. Learn about her beginnings in the chorus, the gym, on the stage, and in front of the camera.

Learn what she eats, how she trains, and check out her favorite supplements. Learn who Amanda is so you can work, succeed, and lift like Amanda does.

You are what you eat. Follow Amanda's nutrition plan to fuel your workouts, promote recovery, and build a bombshell physique.

Name: Amanda Latona
Age: 33
Height: 5'5"
Weight: 128-130lbs, Contest: 121-123 lbs
Occupation: IFBB Bikini Pro, BSN Sponsored Athlete, Fitness Model/Model, TV Host, Spokesperson
Education: High School Grad
Super Powers: Ability to lift steel, and make men weak
Athletic Background: I used notes to get out of gym class, but I've been training since I was 18.
Ultimate Goal: I have so many things I want to accomplish. Ultimately, I want to be successful, happy, healthy, loved, and make a living doing what I love. I want to continue to be an inspiration to others (that's where I get the most fulfillment), lead by example, and change people's lives.

I started out as a singer in the girls' pop group "Innosense" at age 18. They gave us a gym membership to stay in shape and, as soon as I stepped foot in the gym, I was hooked. I saw a woman who worked there with a six-pack, and all I remember saying is, "I want to look like that."

I started eating six times per day and sometimes training twice per day. My love of fitness and passion for performing led me to compete. I won first place at my first show in 2003 (Miss Bikini Florida).

Then I took time off from competing to travel, tour, and sing. I signed two solo record deals.

I eventually moved to Las Vegas in 2006 and stepped back into the fitness circuit. I started competing in 2007 and won a few titles.

In 2009, the NPC Bikini Division entered its inaugural year and I won every show I entered on my path to turning pro.

I also won the Flex Bikini Model Search Championships in 2009 and earned a Weider athlete contract. At the same time I was offered a BSN Athlete contract.

I went on to compete as a Pro, wining five professional titles and placed in the top six of the first Bikini Olympia and International Shows.

I have appeared on several magazine covers including the Flex Magazine Swimsuit issue where I was voted No. 1 in The All-Time Hot list. I host several Fitness infomercials and hope to host my own show one day.

The Stages Of Life

It wasn't really a decision to shift from music; it just happened. I had three record deals: the first was in a girl group (Innosense), and the second two were solo deals. My deal with J-Records was absolutely amazing.

I was a top priority, worked directly with Clive Davis with some of the best people, and was positioned to be a No. 1 recording artist. My single tested above Justin Timberlake and Christina Aguilera at the time, so it was looking great.

One day, around when American Idol came out, I got a phone call saying [J-Records] were going no further. It's hard when you don't do anything wrong, and your career is in the hands of others. That's just what I had to deal with. 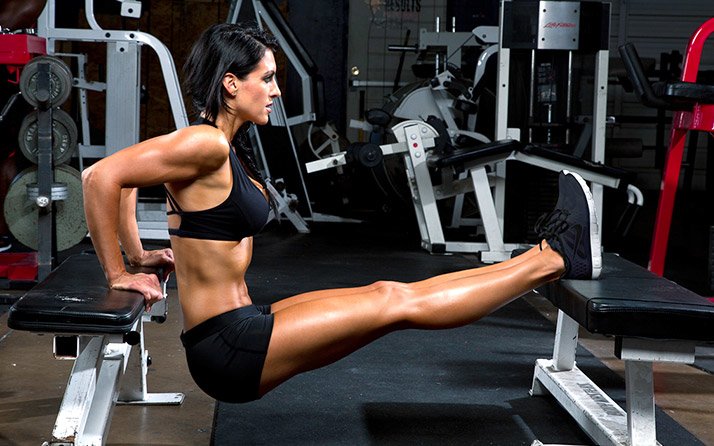 It was a hard time, especially since my dad was battling lung cancer, which later took his life. That was definitely the hardest time in my life. I lost my dad; I lost my deal.

I had been working out and studying training and nutrition the entire time I was on the road. It was just my other passion. With all of that happening in my life, I actually found extra strength in the gym. Going there to take my mind off things became my new focus.

I didn't see it as letting go of a dream, as much as staying positive and focusing on what I love to do, and what would be next, making me happy and finding fulfillment in it.

With my love of performing, I found out about competing. I looked to get a trainer who competed, who could talk me through the entire process right up to the day onstage. I did that, and entered my first competition, and won. I loved it!

Please answer this line of questioning with the number of words allowed! It gets more difficult with each rep/question!

Amanda is qualified to compete in the 2012 Bikini Olympia in Las Vegas, where she currently lives, trains and works as a personal trainer. You can find more about her at her website amanda-latona.com, follow her shenanigans on Twitter @amandalatona, and like her fan page on Facebook.