When many kids were unpacking for freshman year, Amanda was lacing it up for Boot Camp. Fitness is now her focus! Follow her full program.

In 2011, Bodybuilding.com named Amanda Ennett victor of our Military Challenge. This stunning mother of three is no creampuff. She is a Marine. Gentlemen, she has slept with her rifle.

When in Iraq, serving as an Arabic translator on two tours to the war-torn region, Amanda started lifting weights with the men in her unit. This decision to dig in with the guys in a dirt-floor gym began a trend that eventually took Amanda from the ranks of the Marine Corps onto the competitive bodybuilding stage.

A self-described supplement junkie, Amanda Ennett supps for success, although she realizes they're only adjuncts to training and nutrition. Learn her approach and apply it to your own regimen!

Amanda Ennett knows what her body needs, when it can handle stress, and when to give it a little pick-me-up. She eats for peak performance and a perfect physique. Follow her plan to build your own!

Amanda Ennett achieved her best body in a makeshift weight room with a dirt floor, a proud woman in a room filled with fellow Marines. Test your mettle with Amanda's workout program!

Name: Amanda Ennett
Age: 26
Height: 5-foot-4
Weight: 126 lbs
Occupation: Student, homemaker
Education: Associates of Arts in Arabic, Bachelor's in Exercise Science from Old Dominion University
Rank: Sergeant
M.O.S: 2671, Arabic Linguist
Service History: Marine Corps, 2 tours in Iraq
Athletic Background: Played on the high school golf team. (Not much, I know.) Contest History: Competed in figure once and bikini twice; placed 1st in one show
Super Powers: Supermom; I have the ability to cook, clean, comfort and basically carry the world on my shoulders.
Ultimate Goal: To be able-bodied when I'm in my 90s.

Amanda jumped into lifting headfirst: "We worked 12 hour shifts, then we were off for 12 hours. The guys were all going to the gym. I figured I'd join them and see how it went."

It went so well that Amanda developed a love for bodybuilding that can only come from hard work, hot desert, and cold iron.

Six months before she began the 2011 Bodybuilding.com military challenge, Amanda gave birth, so she had some work to do on her body.

Her ensuing transformation brought Amanda to our attention. She was one of 10 military branch finalists, and was chosen as the female winner.

In 2012, Amanda will take part in a few bikini competitions and will graduate from Old Dominion University with a degree in Exercise Science.

Her service took her around the globe and paid for her education. She combines her experiences to train others. Can they hang with this Marine? 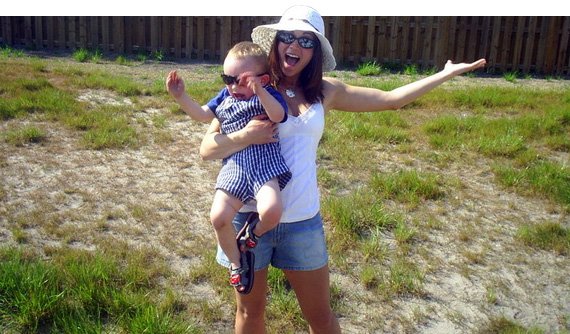 Amanda was an active California child, curious about bugs and dirt. Family vacations took her outdoors, scaling mountains, white-water rafting, camping and fishing, mountain biking and skiing. She was friends with and competed against plenty of girls, but even as a teen, she found her greatest challenges connecting and competing against males.

"I found a closer connection with my dude-friends," Ennett said. "I think males are often easier to deal with than girls, hence one of my reasons for getting into the "Man World" of the Marine Corps."

Ennett served 8 years (5 active, 3 reserve) and two tours in the Corps (8 months, then 6 months in Iraq). She is married to Gunnery Sergeant Kevin Ennett, a Marine currently deployed to Afghanistan. She worked as an Arabic translator, bridging the gap between Iraqi citizens and U.S. Marines. Her weightlifting sessions with fellow Marines were all about heavy lifting, but they were not her only resource. 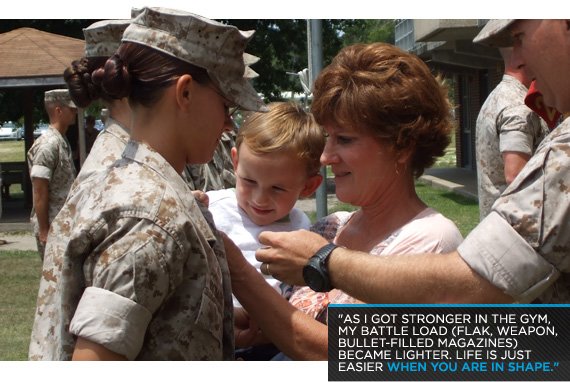 She also researched the industry, read Oxygen Magazine and "ate up" every scrap of info she could get her gloves on. She set up a BodySpace profile and started training for a half-marathon. She ran a 5K and took third place.

"Fitness tests became a breeze for me (3-mile run, 100 crunches in 2 minutes, 60-second flexed arm hang)," Ennett said. "As I got stronger in the gym, my battle load (flak, weapon, bullet-filled magazines) became lighter. Life is just easier when you are in shape."

Amanda returned from war with a better body and a leg up on many regular citizens who will never know true meaning of sacrifice and valiance. She received an honorable discharge in 2011. She won our military challenge, earned AFAA instructor credentials and hopes to use her exercise science degree to help patients recover from cardio-pulmonary complications.

A year and a half before her first deployment (2005), Amanda gave birth to her first child, Casper. When Amanda and Kevin married, she adopted his son Aiden, now 8-years old! Amanda recently gave birth to the couple's third child, Reece, in 2011, but she avoided the weight gain commonplace with childbearing. She did pilates and yoga and was still teaching fitness courses up to 8 1/2 months pregnant.

"I was in the gym the day before he was delivered," Ennett said. "I had it scheduled so I was in the gym that morning, working out. I knew I wanted to keep the muscle strong. When it came to the time to start the challenge, I was already in good shape. I just needed to refine." 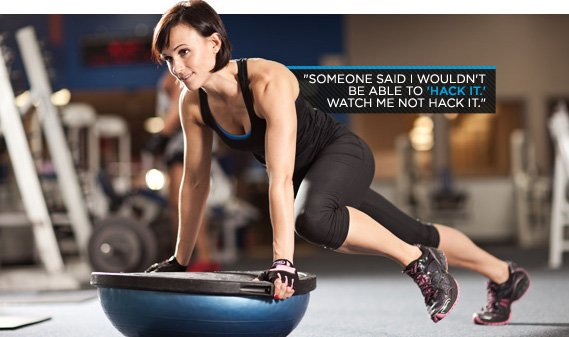 To win the 2011 challenge, Amanda lifted 5 days per week, did cardio intervals, lifted heavy and stuck to Jamie Eason's LiveFit Trainer! Now, her children help her with her workouts at home, far removed from the dirt-floor gym in Iraq. Her 6-year-old son will do burpees and push-ups with his mom.

"When he's in trouble, we make him do wall sits and push-ups, so he's gotten stronger," Ennett said. "He told me he didn't like P.E. in school because they didn't do squats. My 1-year-old likes to climb on me while I am working out, so he adds a little resistance. When I get into a plank position, as soon as I'm down, he's on my back. He thinks it's funny."

Q
Your body is in the best condition it's ever been. You achieved all your short-term goals. Now, will you take a day off?

Were all the soldiers in your unit as in shape as they should have been?

You've seen the world on deployment. Are Americans as fat as the world seems to think?

In wartime, soldiers are asked to deliver in ways civilians can never understand. Have you ever hidden/not told some stories to your spouse/family?

Some aspects of my job, I simply am not allowed to discuss since they are considered "classified." But, then again, they really aren't fantastic enough to talk about anyways.

I don't have any battle scars, physical or mental, that I feel the need to though. However, there were a couple of times that I left the security of base to run health and welfare missions for the Iraqi people.

I definitely didn't mention those to my mother until deployment was over. There was no need to cause her extra worry!

How is it different for women in the Marine Corps?

There is definitely a misconception about what a female Marine looks like. Most people consider women Marines to be "brute, stocky, and manly," but, I consider myself to be none of these things. There were plenty of beautiful, feminine female Marines, just like there are plenty of nerdy and scrawny male Marines. 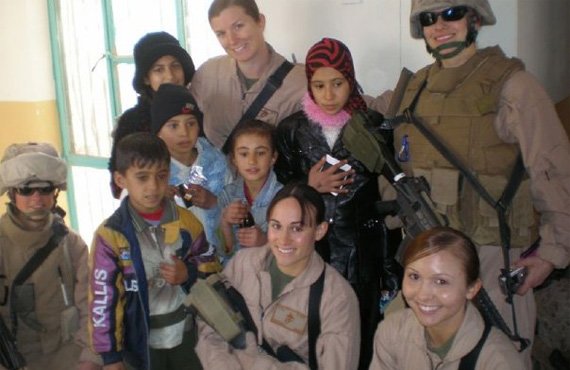 People also consider women to be less capable than their male counterparts. What it comes down to is, we are all trained the same. We know how to shoot our weapons. We know how to fight. Most importantly, we know our jobs through-and-through. I hope the men with whom I worked were confident that I had their backs, as I was that they had mine.

Another aspect that is different for women in the Marine Corps is how we compare to civilian women who have never served. Most civilian women don't know what it's like to leave for 8 or more months, leaving your toddler behind in the States. This makes us emotionally strong. Some people (not necessarily just women) will never know what it is to give a little sacrifice for something you believe in.

Joining the Marine Corps was one of the best things I've ever done. There's nothing like seizing the moment and getting shipped off to boot camp and graduating with a sense of empowerment and independence. Being in the military is one of my greatest and most remarkable memories. I really have esprit de corps and am Semper Fi.

For more on Amanda, check out her Military Challenge page, or visit her Facebook page.