Can Adding Soy To Your Protein Mix Lead To More Growth?

New research has found that adding soy to a casein and whey blend could help increase the length and total impact of your anabolic response to protein powder.

You've probably heard that you should drink whey protein after your workouts to boost muscle growth and increase protein synthesis. As it turns out, the best "whey" to go actually involves using a combination of fast- and slow-digesting post-workout proteins—typically whey (fast) plus casein (slow).

One type of protein you'll seldom hear mentioned in this conversation is soy, which is usually not associated with muscle growth and bodybuilding. Yet if you look more closely at the evidence, you'll find that adding soy to the mix won't detract from you gains—and it might even enhance them.

That's right, a growing body of research suggests that including both whey (fast-digesting) and casein (slow-digesting) proteins in your post-workout shake boosts and prolongs your body's anabolic response.

You can make a bigger impact on overall and long-term muscle protein synthesis by consuming whey and casein after a workout, compared to consuming whey protein alone. Research also shows that, over time, this combination leads to greater muscle growth.

Don't get me wrong, whey is still the protein king. It's the richest source of branched chain amino acids (BCAAs) and is the fastest-digesting protein you can throw down your gullet. That means it rushes its amino acids, including the critical BCAAs, to your muscle fibers to kickstart muscle protein synthesis.

Casein and Whey and Soy—Oh Boy!

While the whey-casein combo is a great post-workout choice, a brand-new study published in the Journal of Nutrition suggests that a combination of whey, casein, and soy proteins may be even better. While whey has a fast digestion rate and casein has a slow digestion rate, soy digests at a rate somewhere in between the two. From a timing standpoint, a casein-whey-soy blend theoretically could help your body sustain a higher level of protein synthesis for a longer period.

To test the theory, researchers from the University of Texas Medical Branch in Galveston had men consume 20 grams of whey protein or 20 grams of a whey-soy-casein combo one hour after a leg workout. Researchers found that both the whey protein and the mixed protein increased muscle protein synthesis to a similar degree. However, the mixed protein, with its differing rates of digestion, maintained a higher rate of protein synthesis for hours longer.

It could be argued that the same response would have been seen with a whey and casein combination. After all, other studies have shown the exact same result with only the dairy proteins. Keeping this in mind, my advice is to combine at least whey and casein to your post-workout shake. For best results, though, I recommend adding soy to the mix. I've been recommending a blend of whey, casein, and soy for almost a decade now.

Because soy digests slower than whey, but faster than casein, it makes a nice bridge between the two and keeps a steady flow of aminos to your muscles. In addition to its speed of digestion, soy offers numerous other benefits that only improve the power of the dairy proteins to promote muscle growth. Many argue that soy protein does not promote muscle growth as well as the dairy proteins, as some studies have suggested. However, these studies either looked at a snapshot of the rate of muscle protein synthesis, or were conducted on animals.

The two studies that provided weight-training humans whey or soy over a long period showed similar results between the two proteins. One 2006 study from Canada, performed on untrained subjects, showed that weight training for six weeks while supplementing with an equivalent dose of whey or soy resulted in similar gains in muscle mass and strength. 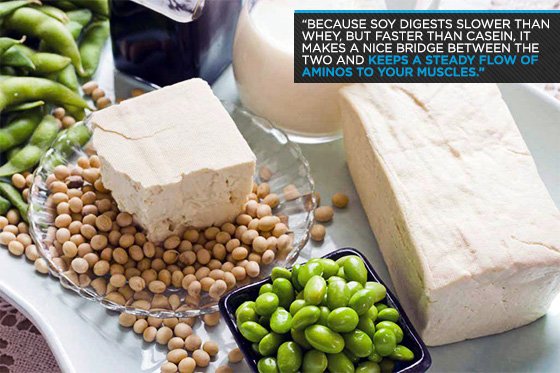 Soy also has benefits that whey, casein, and other protein powders do not. First, soy has the ability to raise growth hormone (GH) levels. This appears to be due to its high arginine and lysine content. Research has also found that soy can boost nitric oxide (NO) levels. Virginia Polytechnic Institute and State University (Blacksburg) researchers found that the soy phytoestrogen, genistein, increased NO levels by increasing the amount of nitric oxide synthase (NOS), which is the enzyme that catalyzes the conversion of arginine into NO.

A 2005 study published in the Journal of Sports Medicine and Physical Fitness found that women consuming soy protein for four weeks had less oxidative muscle damage following exercise than those consuming only whey.

If you've been doing a little protein "research" on the Internet, you probably came across those dire soy protein warnings: Don't have soy or it will increase your estrogen levels and lower your testosterone. "Oh, no," you think, "I just had some soy milk and I can already feel my penis shrinking!"

These fears have been perpetuated by a couple of old and poorly conducted studies. The most recent review study analyzed 15 quality studies done on soy and testosterone levels in men and concluded that soy does not alter testosterone concentrations in men.

Honestly, I think it will save you money in the long run. Casein and whey protein powders have been getting more and more expensive. Soy, on the other hand, remains fairly inexpensive. By "cutting" your whey and casein with soy, you'll get more bang for your buck.

I typically mix whey, casein, and soy at 2:1:1 ratio. So a post-workout shake for me means about 20 grams of whey, 10 grams of casein, and 10 grams of soy. As for brands, I prefer Dymatize ISO-100 Whey, Dymatize Elite Casein, and Optimum Nutrition Soy Isolate.