Layne Norton Reloaded... The Comeback: Recovering From A Torn Pec

I was in one of the best PhD programs in the country and I was about to get married to my lovely fiance Isabel in May... life was good. No life was great! But on February 25th, 2008... it changed forever. Read on.

Layne Norton Reloaded... The Comeback
Part I: The Injury

Time. It goes so fast at so many points in life. We look back at the years that were and feel like they were just moments ago. And yet, there are points in our life that seem to stand still. Turning points that become burned into our minds like a brand on cattle, things you will never forget.

Monday, February 25th, 2008 was one of those moments for me. At that point I was someone who had earned their natural pro card with 2 different federations and was looking forward to competing in my first pro show in 2009. I had my own webcast on Bodybuilding.com, was writing for several magazines, I was in one of the best PhD programs in the country and I was about to get married to my lovely fiancée Isabel in May... life was good. No life was great! 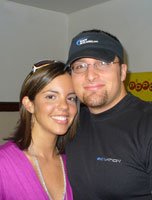 Since I was taking 2 years off I had decided that it would be fun to compete in something else to keep my competitive juices flowing. Powerlifting was the natural choice. I was always decently strong and I decided that this was something I could do for fun and getting stronger wouldn't hurt my pursuit of muscle either.

As many of you know, my routine actually utilizes quite a few powerlifting techniques in it anyway so I felt quite comfortable with focusing on more of a pure powerlifting routine for a while. I started on a Westside Barbell routine setup and started making really good strength gains.

At 220 lbs my bench press rose to about 400 lbs. My squat was over 500 lbs and I had pulled a max deadlift of 615 lbs (see video) and was very close to getting 635 lbs. This put my 3 lift total somewhere around 1500 lbs+ and would have been good enough to qualify me to compete in the world championships in November if I was able to do them at the national qualifying event in June.

I would be lifting raw since I decided I didn't want to spend money on a suit and didn't want to spend a ton of time learning how to use a squat/bench/deadlift suit. I had nothing against those who do lift equipped, it just wasn't for me. I figured since it was only February I could probably get my 3 lift total to around 1600 lbs and really make a statement that natural bodybuilders can still be strong. We don't lift girl weights as shown in some of the natural magazines.

My split had 2 basic principles. The first 2 days of the week were power days, focused on building up to 1-3 rep maximums on various exercises like squat, front squat, box squat, squats with bands, deadlifts, good mornings, bench press, bench press with bands and a few other lifts. 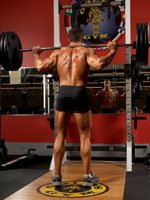 Click To Enlarge.
I Focused On Building Up To 1-3
Rep Maximums On Various Exercises.
The latter 2-3 lifting days of the week were devoted towards developing speed and explosiveness. February 25th, 2008 was to be a power day for bench press with bands. The bands are basically big rubber bands that are attached to the barbell and then attach them to the top of the cage. As you lower the bar, the band stretches and takes up more of the load, so the weight feels lighter as you lower it during the portion of the lift where you are weakest (the bottom).

As you press up the weight gets more and more difficult as the band shortens and the tension becomes reduced. For my working sets I would be starting 545 lbs on the bar. With bands, at the top of the lift the weight was approximately 500 lbs+, at the bottom it was about 375 lbs or so. I had done this weight 3 weeks ago and figured it would be one of my first heavy sets to set me up for possibly putting 565 lbs on the bar.

I warmed up as I would normally warm up. I did approximately 7-8 warm up sets pyramiding up in weight each time and I felt very good. I felt my form was tight. 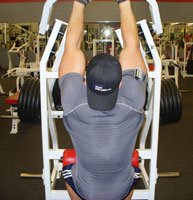 This is the way you see 99% of people in the gym bench press. The proper way to do a powerlifting style bench press is to keep your elbows in further and keep your hands closer, almost like a close grip bench press. This allows the body to recruit more muscles (triceps and lats) to help out the pecs and delts with the lift. 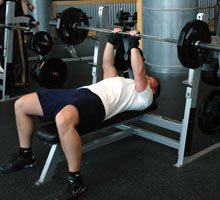 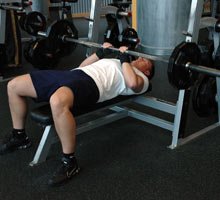 The bodybuilding style bench press places an enormous amount of stress on the pecs and delts and in particular places disproportionately more tension on the tendon of the sternal head of the pectoral.

After I loaded the weight on the bar and got it in the right place I began to focus for the set. I turned up my headphones and got under the bar. I un-racked the weight and it felt good.

Click To Enlarge.
I Got The Bar In The Right Plance
And Began To Focus For The Set.
I lowered it slowly to touch my chest and began to press. Then I felt a hot streak go across my chest and something that I can only describe as feeling like saran wrap tearing apart in my chest. Fortunately I had set the safety bars just below my chest so I was able to dump the bar, but I knew exactly what had happened.

I had torn my right pectoral. I yelled "NO!!!!!!!!!!!" Not in pain or agony, but just in frustration... the one injury I had always said I never wanted, I had just gotten.

Isabel came running over to see what was wrong, as well as about half the gym. In my gym everyone pretty much knows me, love me or hate me but they know me and many of them came over to check on me to see if I was ok, which I appreciated. I told Isabel we needed to get ice on it and get to the ER, that I had torn my pec.

As we drove to the ER my mind was racing. What had I done? How stupid could I be? Pec tears can deform your physique. Anyone who has seen a bodybuilder with an unrepaired pec tear knows that it is very damaging to one's symmetry. That may sound like a shallow assessment, but I love bodybuilding and I love competing so for me it was a very depressing thought to be faced with.

Click To Enlarge.
I Love Competing So It Was
A Very Depressing Thought.

We got to the ER and had to fill out how many papers while we were waiting. It was funny; it never really hurt that much to be honest. Perhaps it was because I was so pissed off that I had torn my pec that I didn't think about the pain, but I always thought that injury would be much more painful. Don't get me wrong, it didn't feel great, but it wasn't agonizing.

After about 2 hours it was finally our turn to see the doctor. He was a nice enough guy but I could tell he really didn't know much about my injury. Come to find out pec tears are very rare and only about 200-300 are reported per year.

The doctor had me move my arm into various positions and examined my chest. He said "I think you just have a strain", I started to breathe a sigh of relief! Maybe that's why it didn't hurt that bad!? Maybe I just strained it!

The doctor told me to ice it and take some anti-inflammatory pills. He said to look for discoloration over the next 48 hours. If the area darkened or looked bloody, then I had probably torn it, if not I was likely in the clear. I went to sleep that night but only for a few hours before I woke up. I ran to the mirror to look at my pec... no discoloration. I went back to sleep. I woke again hours later and again checked for discoloration, and there was nothing!

I went through the next 48 hours checking my pec every few hours and the entire time there was no discoloration. In fact I never saw any discoloration. I was so relieved, I was in the clear... or so I thought.