Sara's once all-consuming fitness program left her running ragged and almost killed her enthusiasm for exercise. Learn how she revamped her routine and found a healthy medium.

Not everyone is thrust into the fitness spotlight from birth. For Sara Solomon, living a fit lifestyle came later in life.

The now-athlete and jump rope wiz didn't always feel at home in the gym.

Her love of fitness was first fueled by her desire to shed the extra weight she'd put on during dental school. But what began as a healthy endeavor quickly spiraled out of control.

Sara became obsessed with the gym, suffered metabolic damage, and eventually lost her passion for living a fit lifestyle.

Her love of fitness turned into hate, and she was ready to throw in the towel.

Sara's story might have a bumpy start … but it finishes strong.

Sara Solomon's less-is-more, high-intensity approach is an all-out workout that takes less than 30 minutes and only calls for a jump rope and free weights.

Sara Solomon's nutrition philosophy is all about intermittent fasting. No stacks of Tupperware or six meals per day for this jump rope queen.

Sara splits her stacks depending on whether she's fasted or feeding. Each supp plays an important role. Learn more about how she does it.

From Bookish To Buff

Sara wasn't always a fitness fanatic. In fact, she grew up in a household where athletics were cast aside for academics. "I was brought up by a very academic set of parents," she says. "Athletics and after-school sports were something that was completely pooh-poohed, and it was all about practicing piano and studying."

All the studying paid off and Sara went on to earn her Doctor of Medical Dentistry in 2005. Still, she wasn't entirely happy with herself. "I had put on a boatload—a metric boatload—of weight because I was studying while eating a box of croutons and a bag of Twizzlers," she says. So, she joined a gym, worked out, and shed the extra pounds. 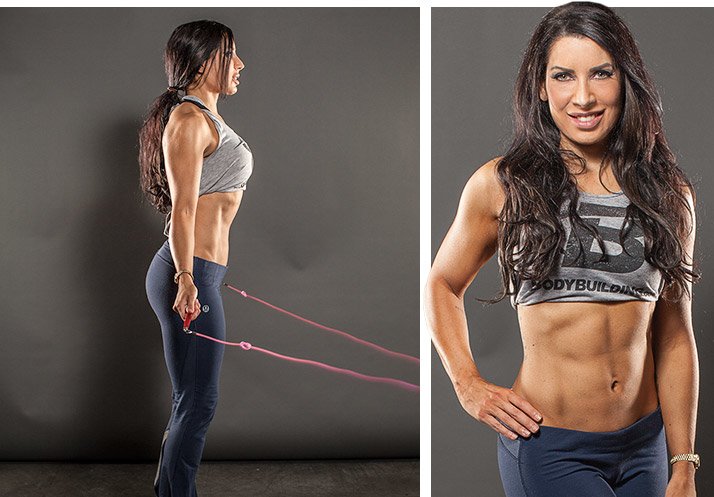 "I was reading more and more and started to realize 'Hey, there's actually a smarter way to go about living a healthy lifestyle and it's active, maintainable, and causes no physiological,metabolic, or psychological harm."

Then, things got serious. "I was starting to look betterisher," she jokes. "I was approached by a pro fitness model in the gym who said I should compete." Sara's knee-jerk reaction— "Hells no, I'm not going to show the whole world my cellulite burbles" —quickly turned around. Over the next 5 years she would compete nine times.

Sara's love of fitness soon became all-consuming. "It was taking on every single waking minute of my life to the point where it became an unhealthy obsession," she says. This included her diet. "There was a point where I was down to 800-900 calories per day, and I was doing two hours of steady-state cardio on top of one hour of training. It wasn't long before I started to completely lose my passion for fitness."

Chronic training and over-dieting threw her metabolism out of whack. "It was ironic because the very regimen I was following to try to lose weight was actually making me fatter," says Sara. She was headed down a slippery slope. "I was starting to develop eating disorders and was miserable. I hated fitness and I was ready to throw in the towel."

Hitting The Books Before The Gym

Instead of giving up, Sara took the reins and did the leg work. "I spent a lot of time at the pub—that's PubMed, not the pub—and I started to realize 'Hey, all of these theories that have been preached to me all of these years are actually not true," Sara says.

"I was reading more and more and started to realize 'Hey, there's actually a smarter way to go about living a healthy lifestyle and it's active, maintainable, and causes no physiological, metabolic, or psychological harm.' Plus, it's fun and time-saving. It literally only takes 30 minutes out of my day."

You were brought up in a family that emphasized studies and scholarly endeavors over fitness. Still, you managed to get into fitness. What advice would you give to children in the same position?

As a young child, my mother always said, "Work first, play later." I agree that education always comes first but, without balance, your efforts to excel in school can actually be compromised. In fact, taking a few short breaks a day can actually increase your productivity.

Now, when I was in university (many moons ago), I believed "fitness" meant I would have to join a gym, give up bread, and exercise for at least an hour a day to reap benefits.

If only I had known then what I know now, things would have been very different. Now I only train 20-30 minutes a day in the privacy of my own home. I could have easily factored that into my studying schedule. Hindsight is 20/20. Start exercising now; just make it manageable.

What advice would you give to someone who's in a bit of a workout slump, not seeing results, and on the verge of giving up?

If your workout program isn't giving you results, stop it! Learn to think critically. Instead of spinning your wheels doing something that doesn't work anymore, change your regimen; don't just do something because someone told you to.

Think about your diet and fitness programs and how you can better tailor them to meet your needs. In the time it takes for you to complain about what you shouldn't have done, you could have already taken steps to start rectifying it.

Think about your diet and fitness programs and how you can better tailor them to meet your needs.

You're the jump rope queen. What advice would you give someone struggling to do double unders?

Once upon a time I was a jump rope klutz, constantly tripping over the rope. But with practice came proficiency. Master the basics of jump rope training before attempting advanced moves. Failure to follow a systematic progression can lead to injury.

That being said, I will teach you exactly what Olympian Buddy Lee taught me:

You seem to be inspired by characters—Lara Croft, The Tooth Fairy, Wonder Woman, and even a vampire. When it comes to fictional characters and superheroes, who are you most inspired by and why?

I confess: I love my superheroes, especially Lara Croft. Although she is merely fantasy, she still inspires me to take charge and make the world a better place for others.

Back in reality, however, I draw inspiration from real life heroes—people who risk their lives every day to help others.