Nicole danced and cheered for the Chicago Bulls, but she wasn't quite sure of her next move. She sought relief in fitness. Not only did she find it, but she also became a top bikini pro!

In the early 2000s, Nicole Moneer Guerrero found herself at a crossroads. She spent her life dancing and cheering, including a stint with basketball's Bulls, but her next move was unclear.

Enter fitness. You can't cheer forever, but the burgeoning world of fitness seemed more accepting of those young at heart but a few years past pom-poms. "I didn't want to grow up!" she says, laughing.

"I wanted to continue my passion for being on stage, for acting and dancing, so I started competing. There is no age to this sport … There are so many women now in this sport who are getting into it at 40 and 50 and even senior citizens. You can do it if you just believe in yourself."

Nicole started dancing at age 4, so she never really knew a sedentary lifestyle. At 38-years old, she looks better than ever, more solid, more in shape and more complete as a person. What made the difference? Metal.

"People don't understand the power of steel," Guerrero says. "Steel is my deal. I love hitting the weights, and that's what's helped my body. There are so many myths out there. Men and women think they're going to get big and bulky. I always push them toward weight training, and also the nutrition, to get the whole package." 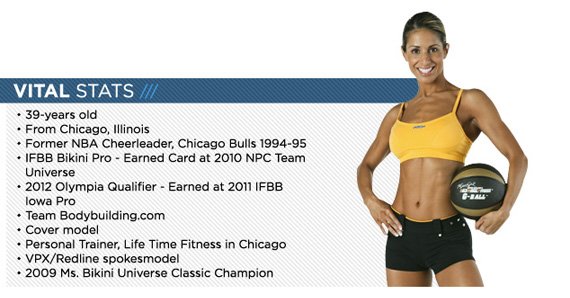 Nicole includes a vast array of supplements to support her health. It wasn't easy finding the right stack, but over the years, she discovered what works for her body: variation.

Nicole eats clean, takes her meals with her wherever she goes, ingests sufficient protein at every meal, and she limits her fat intake to healthy nuts and butters.

Nicole hits the weights 5-6 times per week, targeting every major muscle group. Her dance and cheer history built an incredible and stable lower half.

My brother … I am amazed by his strength and optimism. In 1976, he was diagnosed with Leukemia. I was the only family member who was a perfect match for a bone-marrow transplant.

At that time he only had a 10% chance of living and he did. He's a fighter; I guess that is why he practices law.

Today he resides in California and will never return back to Four Seasons Chicago! He leads a normal life but suffers many complications. One would never know because of his positive outlook on life. I thought this was my reason for being here on earth … I guess I'm still around for something else.

Not sure what tops keeping my brother around to share in all of our lives! We both support Imerman Angels. Please visit their website for more information. www.imermanangels.org

Like so many fitness competitors, Nicole works as a personal trainer, trying to steer struggling fitness hopefuls in the right direction. She understands their struggles. On the surface, Nicole may seem like a silver-spoon athlete, with natural gifts and beauty, but this woman struggled against health ailments for decades before finding physical peace.

Nicole suffered from infections, chronic allergies, GI distress, chronic fatigue, adrenal fatigue, asthma, recurring sinus infections and more. Her parents were both in the medical field (her father, deceased, was a doctor of Hematology and Oncology; her mother was a nurse), so she tried a litany of remedies. Yet none worked.

"Growing up I was fed a plethora of drugs and allergy shots anytime I was sick," Guerrero said. "My dad handed me a container of prescription drugs when I went off to college, so I just took stuff whenever I got sick."

Being sick became her new normal. Nicole wanted relief and was willing to try anything. She hired an Integrative Chiropractor at age 33 began treating her illnesses with dietary change, detoxification strategies, and supplements (30-plus).

Mission accomplished. She hasn't taken prescription or over-the-counter drugs for seven years now. She still takes 15-to-20 supplements everyday and eats meals based on organic whole foods, free from toxins and hormones, the grass-fed, wild and raw foods.

"I have seen the light!" Guerrero says. "My health has never been better. If I get sick, it's usually because I am run down due to lack of sleep, I've had some alcohol, or I've put an excessive amount of processed food in my body several days in a row. Our bodies are made to live off the land and sea. They're not made to break down chemicals."

Ironically, personal trainers are like highly resourceful cheerleaders. They pick you up in difficult times and propel you forward when momentum catches you in its surge. Nicole's experience as a real cheerleader prepared her to motivate her clients.

She cheered through high school and at Iowa State University, but when she left school she focused her attention on a goal that would shoot her "cool" factor through the roof.

In the summer of 1994, she tried-out for the Luvabulls, the cheer squad for the NBA's Chicago Bulls. She beat out 200 others and earned a spot on the squad.

"I didn't even tell my parents," Guerrero said. "I just came home and said 'I am a World Champion Chicago Bulls cheerleader.' Yes sometimes I am like that - I keep my doings on the DL until they actually come to fruition."

Nicole was on the court when Michael Jordan came out of retirement in March of 1995, after spending much of two seasons playing minor league baseball.

"Remembering that starting line-up still gives me chills," Guerrero said. "The energy in the United Center has never been the same, although it's closer now with D-Rose, Noah, Boozer and team."