The 24-year-old bikini star works hard in the gym to make it look easy on the beach. Learn her secrets, get her full fitness plan.

Name: Brittany Tacy
From: West Palm Beach, Florida
Age: 24
Weight: 117 off-season, 113 contest
Height: 5'4"
Occupation(s): Personal trainer, bartender, student (on hiatus)
Education: Studying exercise science and health promotion at Florida Atlantic University
Role Model: I've always admired Amanda Latona. I love her body and admire everything she has done. She is one of the most recognizable bikini competitors in the industry, but you would never know it by talking to her because she is so down to earth and friendly.

An attractive woman with abs living in Florida will tend to collect bikinis almost as fast as she tosses unsolicited phone numbers.

Brittany Tacy owns several competition suits, but her drawer runneth over with the beach-ready kind. "I've lost count of how many bikinis I have," she admits.

She lives in Florida, but not the Florida of retirement communities; we're talking West Palm Beach—Girls Gone Wild country. So it only makes sense that she'd become so proficient at rocking a 2-piece that she would come to star in a physique sport called "bikini."

Sanctioned and run by the NPC (amateur) and IFBB (pro), it's a cross between Hawaiian Tropics and female muscle building, emphasizing aesthetics over ergogenics.

Whereas Spring Break for some girls is about going crazy—and hoping it's not on YouTube when the hangover wears off—Brittany embraces bikini as a lifestyle. "I like the diet, and I like the discipline," she says, noting that her weight doesn't fluctuate more than a meager five pounds between off-season and competitions.

It takes extreme dedication to keep your abs outlined and your glutes stage-ready year-round. Fact of the matter is, not everyone has what it takes physically and psychologically to do this.

Brittany is a throwback in the gym. She lifts heavy and keeps her routine basic. Her results speak for themselves.

Brittany seems to have been born with the desire to be ripped. When other girls were dressing their Barbie Dolls, Brittany was looking for abs on hers. "I have always been obsessed with working out," she says. "I wanted a 6-pack since I can remember."

While her first gym membership was a gift—for Christmas, from her mom, when Brittany was 16—she had to work her butt off to get those abs and that butt. In fact, she's worked hard for everything. "My parents raised me [and my two sisters] with love but very tough," she says. "Nothing was ever given to me." 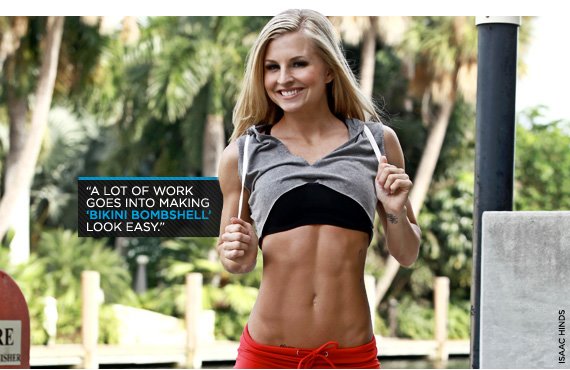 Brittany was handed a baton at 5, and she had the good sense to throw it straight up in the air. By middle school, she was practicing an hour each day in her driveway, and cheerleading as well. That was only a warm-up for high school, where she played a handful of sports, including varsity weightlifting and varsity flag football, as a wide receiver. Catching a spiral was no doubt a piece of cake compared to a spinning stick. "I was a natural at pretty much every sport I tried," she says. 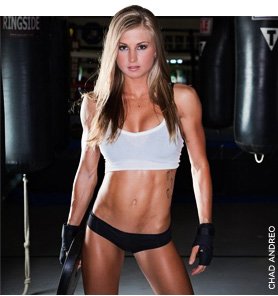 Scholastically, she was similarly gifted, taking advanced-placement and honors classes all the way through high school.

Upon graduating, she enrolled at Florida Atlantic University to study exercise science and health promotion. She also decided to compete.

Brittany, who only just turned 24, didn't even start training for her first show until right before her 22nd birthday. A natural, she won her pro card at the NPC USAs in 2011, and then qualified for this year's Bikini Olympia at the 2012 Greater Gulf States Pro contest.

She was preparing for the O when I interviewed her. 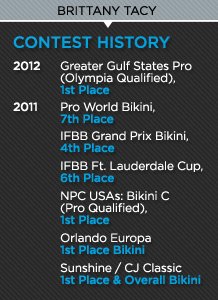 What does it take to succeed in bikini as Brittany has? Well, it doesn't hurt to be blonde and gorgeous. Having great body genetics isn't a liability, either. But the world is full of women with great natural assets who don't look like her, or who are out of shape altogether.

As you'll see on the pages devoted to training, diet and supplementation—be sure to check them out after reading this—a lot of work goes into making "bikini bombshell" look easy.

The window on bikini stardom doesn't stay open forever, so she's put her formal education on hold for the moment, tending bar by night and pursuing her fitness dreams by day. I ask her to fast forward 5 years. "Hopefully, I'll have won an Olympia title by then," she says, laughing.

"But I really just hope to have made a name for myself in the fitness industry. I train people now, but hopefully I'll have a broader clientele. And I want to keep working fitness expos and making appearances. I love meeting people and trying encourage them to reach their fitness goals, too."

What's the strangest thing you pack when traveling to competitions?

For the average person, getting on a plane with a cooler and Tupperware and eating fish out of a Ziploc baggie is pretty strange. And along with the canned tuna and canned chicken, I pack no-salt mustard in my suitcase. That's pretty weird. 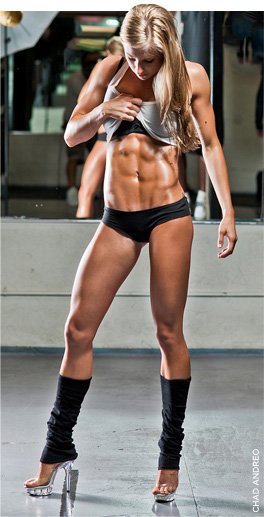 Tell me the one thing going on backstage that would surprise people.

There's not a whole lot going on backstage, surprisingly. There is a whole lot of laying around, listening to music on your phone ... that's about it.

Is there anything you need to do to psych yourself up to go on stage?

I don't get too nervous; I try not to over-think things. I have my routine in my head, I know what I need to do, but at the same time, that's the fun part.

That's when you get up there and get to show your personality, show off what you've been working for. It's all in the judges' hands.

Oh my gosh, I put protein powder in just about everything. One of my meals is a scoop of whey protein and a tablespoon of peanut butter.

Sometimes I don't want to drink a protein shake—I'd rather actually eat something—so I'll mix it up with a little drizzle of water and the peanut butter. Kind of like a pudding but not as thick or as much. I'll put it in this little Tupperware container and eat this gooey, weird substance with a spoon. It tastes delicious when it's cold.

If you were on American Idol, what song would you sing?

"Glycerine," by Bush. It's one of my favorite songs of all time and I love it.