Brendy made the decision to pursue bikini competition and was onstage a month later. She doesn’t let anything get between her and her goals!

Athletes may seem like they have this "fitness thing" figured out, but they often begin their fit lives as confounded as the rest of us. Brendy Scheerer played four sports in high school and was a cheerleader to boot, but poor nutrition and faulty programming held her physique back. She actually counted KitKat bars as part of her "healthy" diet.

In college, Brendy's athletic frame first took the low road. Like many college students, she gained weight and lost muscle. However, a personal tragedy changed Brendy's trajectory and steered her closer to overall health. Brendy reacted positively to trauma, and chose to reinvent her health and build a stage-worthy body. Follow her personal program to build your own fit physique!

Brendy Scheerer believes in a holistic approach to fitness. She loves to lift heavy, hit cardio multiple times per week, and dance whenever she can. Check her plan!

Good nutrition requires a sound strategy, and that's exactly what Brendy Scheerer has developed. Check out her sustainable nutrition plan!

Brendy Scheerer knows the true value of supplementation. She uses supplements that support her diet, training, and goals. Check out her stack!
A Career in Fitness ///

Brendy's adult journey to a healthy lifestyle began, unfortunately, in the wake of a family tragedy. Brendy's sister, Dana, was diagnosed with lupus in her 30s. The disease caused Dana great pain and eventually led to her early death.

Watching her sister struggle with her health forced Brendy, then out of college and still carrying some extra weight, to appraise her own health. Dana's death did even more to put life in perspective. Brendy had to think about how she lived—and how she wanted to live.

"My life wasn't going the way I wanted," Brendy says. "I was doing a lot of things that weren't the best for my body. After I lost Dana, it was a kind of a wake-up call. My sister believed in me even when I didn't. When she was no longer there, I wanted her to be there in spirit. That was my first intuition. I needed to do something. I got a trainer and I got someone to help me with nutrition."

The shift was massive for Brendy. She started lifting weights, doing cardio, and studying nutrition. She wanted to live, and to live well. Her desire expanded from self-improvement toward excellence. 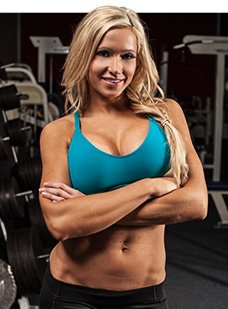 "I didn't really know anything about sports nutrition, but I saw it in the magazines," Brendy says. "I saw pictures of these beautiful girls and they became my idols. I just said I wanted to look like them.

I remember taking this magazine to my trainer. I said I wanted to do a fitness competition and he looked at me and said, 'Oh, maybe next year.'"

There was no "next year" for Brendy. She wanted to change immediately. She found a competition one month away. She worked her butt off under the tutelage of Max McManus in Reno, Nevada, to prepare for the comp. Brendy didn't win the contest, but she got on stage and realized that success was possible.

Later, competing in the NPC under the watchful eye of Kim Oddo, Brendy finished fourth at the 2010 NPC Bikini Nationals. This led to her sales position with the supplement company BPI Sports. Her competitive career is on hold, for now, but the spark that got her started will not go out. She has the strength to fuel it.

Dana Marie Scheerer-Port, Brendy's sister, was diagnosed with lupus in her 30s. Lupus is a chronic autoimmune disease that can damage any part of the body, but often attacks the skin, joints, and organs. Lupus prevents the immune system from fighting off viruses, bacteria, and other foreign invaders.

Side effects of lupus include can include memory loss, cardiac arrest, staph infections, rashes, and more. Dana suffered from the majority of these side effects before passing away. Brendy participates in the Lupus of America Foundation and recently started another fundraising page in honor of her sister. Donate to the site and help find a cure for lupus.