Think you've got what it takes to hang with the ripped athletes of Team Grenade? Test yourself with this grueling boot camp workout!

The sheer dedication it takes to become a member of Team Grenade is enough to put the most diligent of fitness fanatics off going to the gym. The challenges certainly don't stop once the members make the team. Each member faces individual challenges, but together, every challenge is beatable.

Each year, while attending Joe Weider's Mr. Olympia Fitness and Performance Weekend in the heart of Las Vegas, Team Grenade embarks on a boot camp that could crush the wills of normal people, but these are not normal people.

In 2013, the group took on the Rhino CrossFit boot camp, to see which member of Team Grenade was the fittest of them all.

Camp Rhino CEO and instructor Julie Johnston runs Team Grenade through a CrossFit style assault course in Las Vegas each year to coincide with the Mr. Olympia weekend. She is a tough instructor; she has to be to get the best from this group of elite athletes.

In 2011 Team Grenade was sent out into the Las Vegas desert to undergo a grueling early morning workout: carrying heavy logs, running up sand dunes, and pulling vehicles. 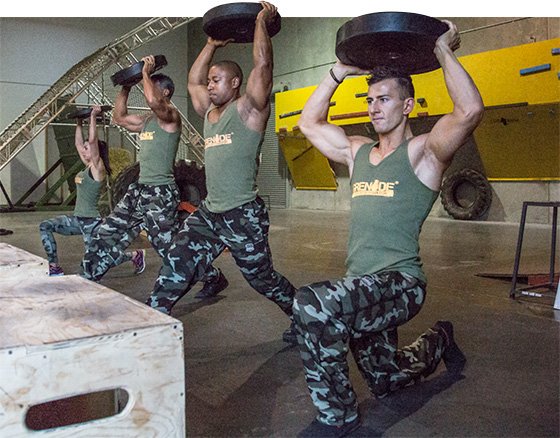 The sheer dedication it takes to become a member of Team Grenade is enough to put the most diligent of fitness fanatics off going to the gym.

The 2012 weekend took Team Grenade's yearly boot camp to the Las Vegas strip, where they performed workouts on a custom-built trailer. Onlookers could see the team members being put through the paces up and down escalators, over bridges, engaged in pull-ups, rings, and high-intensity sprints.

The 2013 challenge took Team Grenade indoors to the Camp Rhino warehouse to attack the CrossFit assault course. The challenge? Undergo three rounds of a 10-minute AMRAP (as many rounds as possible) triad: upper body, lower body, and core.

Grenade endurance athlete James St. Leger specializes in CrossFit training. James finished with the most total AMRAPs at the completion of three rounds, and was thus named the fittest member of Team Grenade.

Who knows what 2014 will bring! The team will find out when it returns to Vegas!

This is great for your quads and glutes, and will certainly make you more explosive as you push up with a 45-pound plate raised above your head.

Right after the team members finished the lunges, they went straight into doing squats, then a box jump. Once again this focuses on your legs and explosiveness.

(As many reps as possible)

The vertical monkey bars are no joke. As Team Grenade member Richard Elston mentioned, it completely "ruins your grips." It will however completely work your arms and upper body significantly. 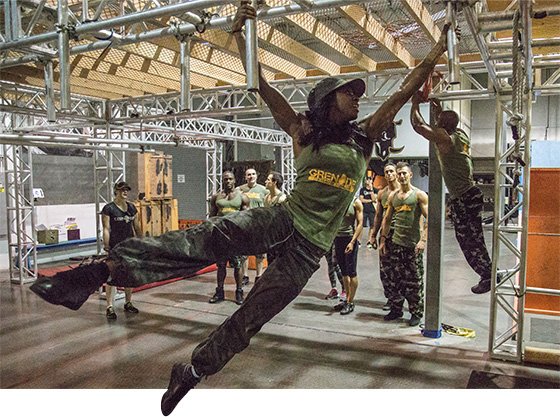 The vertical monkey bars are no joke.

(As many reps as possible)

Climb across the Yellow Wall as many times as possible. How difficult could that be? Apparently it's very difficult. Team Grenade members were hanging by the tips of their fingers on the bars of the dreaded Yellow Wall. It's a great way to gain strength in your arms using only the benefits of gravity.

You might get thrown out of your gym for doing this, but if you can purchase a medicine ball and use it outside, then this is a great way to not only gain explosiveness, but you'll also give your deltoids a great workout too. 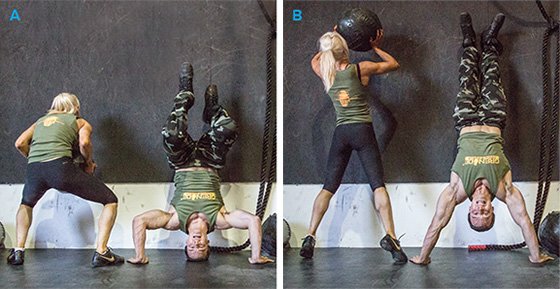 Press-ups are already a great way to gain upper body and core strength, so doing them with just the use of your hands is only going to make it more difficult, but the strength gains will be great too.

If you're looking for an all-body workout, then rope commando crawls are for you. The more you do the more tolerant you'll become to lactic acid. 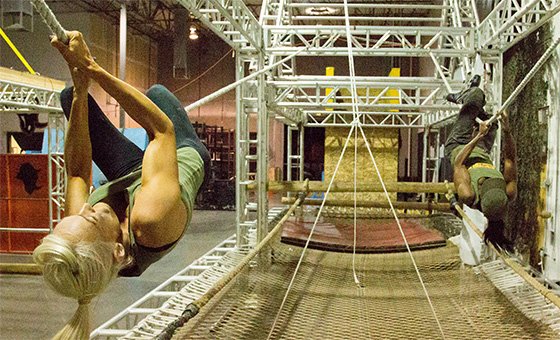 If you're looking for an all-body workout, then rope commando crawls are for you.

(As fast as possible)

Wall climbing may not seem like the most arduous of tasks, but it can be very tough for your lower body and back muscles. 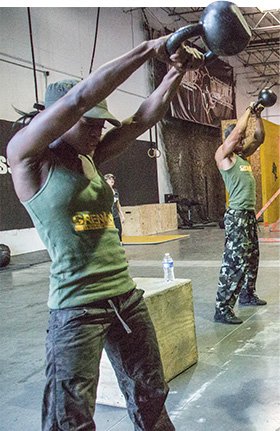 Add some kettlebell swings into your workout.

Everyone wants to have rock-hard abs, yet no everyone diversifies their workouts.

Add some kettlebell swings into your workout and the fantastic looking core you always wanted may soon come.

Plus, you'll burn a significant amount of fat in no time.

There's no better way to complement your kettlebell swings than with some ab-crushing 'toes to the bar' exercises straight from the CrossFit sacred scrolls.

Your shoulders will get an intense hit from hanging on to the bar.