Anatomy Of An Injury: Hamstring Pulls And Tears

Recovery should begin the moment after an injury occurs. Learn how to begin treating a hamstring pull or tear, and reduce your time on the sidelines.

Cruel masters of the Middle Ages severed the hamstrings of domestic slaves or prisoners in order to curtail escape. This is the origin of the term "hamstrung," which means to be crippled or held back.

Hamstrings can also suffer less gruesome, self-inflicted injuries—like when the sprinter exceeds the load that a muscles can withstand. The hips lift the knee (which stretches the hamstring), then the knee extends as you take a step (which further stretches the hamstring). When your stride elongates, if your hamstring isn't flexible or becomes fatigued or the load exceeds the strength at any moment, you're at risk of pulling or tearing the muscle.

The hamstring group comprises three muscles and their tendons, which originate on the ischial tuberosity (the part of the hip you sit on), flow down the back of the thigh and attach to the front and back of the knee. Like all muscles, the hamstrings are tethered by tendons, in this case to the hip and knee bones.

You can feel the biceps femoris tendon on the outer back of your leg and follow it to where the muscles attach and where it attaches to the bone. Muscles become tendons at the musculo-tendinous complex, a common location for hamstring tears. The tendon is part of the tissue layers within muscle fibers; tendons extend out to the ends of a muscle, then connect the hamstring muscles to bones.

When An Injury Occurs

You will feel, and perhaps hear, the hamstring "pop" when it tears. A hamstring pull is more difficult to ascertain than a tear; that is, unless you've felt it before. You will be running and somewhere in the process of taking a step, the load put on your hamstring exceeds its strength and it tears. It's like a rubber band: you can stretch it, but it reaches a limit and snaps.

When you tear or pull your hamstring, first wrap the injured area with an ACE bandage and ice it immediately. Do not sit in a sauna or hot bath. Prolonged exposure to heat following a muscle tear can increase bleeding and lead to shock or cardiac arrest. So, yeah, ice it. 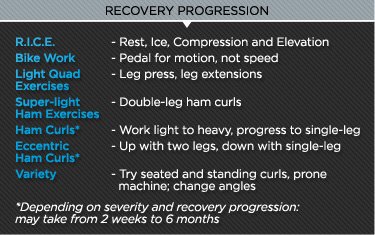 Within a few days of the injury you must begin rehabilitation. Jim Moore, exercise physiologist at the Idaho Sports Medicine Institute, said the reintroduction of blood to the affected area is paramount. Get moving with low-resistance cycling or swimming.

"The first few days should be ice and wrapping, but get into slight resistance work within a few days," Moore said. "They may be baby steps, but you need to take them."

Most hamstring injuries do not require surgery. Only hamstring avulsions (in which the hamstring is pulled off of the bone) require opening a surgeon's toolbox. Sometimes a young person will avulse the tendon from the bone because it hasn't matured or hardened yet. In such cases, surgeons use screws and washers to re-fasten an avulsed tendon to its home bone.

The enormous remainder of hamstring injuries will heal on their own over time. Your body smartly adapts to trauma. Inflammation arrives almost immediately to begin the healing process. Blood flow brings nutrients in and removes waste at the injury site.

It's All In The Hips

When was the last time your workout focused on hip flexibility? The improved mobility can invoke strength gains in your other exercises. The hamstring is a two-joint muscle, crossing the hip and the knee. 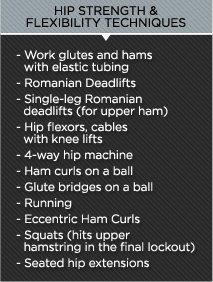 Flexibility and strength in both joints supports rehabilitation and limits re-injury. Initially, work the hamstring in both hip extension and knee flexion independently. Later, when you run again, they'll work in concert.

"Your hips play a role in stabilizing, which probably played a role in your injury," Moore said. "If the hip muscles are weak, you lose hip stability, which may create some weakness in the hamstrings' ability to do their job."

If your hip flexors (the muscles that lift the knee) are tight, it creates an anterior tilt to the hips, so the hamstring has to stretch an extra 2-3 degrees. This makes it likely that you'll reach those limits on the hamstring quicker in that swing phase of the sprint.

Running technique is vital. Weak hips may wreck your posture, making you stand erect too quickly in a sprint. This can lead to stride issues and muscle tears. Squats help you have a better acceleration phase in the sprint, so you stay in better position longer.

In rehab, and normal weightlifting, address all the core groups: the trunk and pelvic core muscles, the hip muscles and the quads, hams, calves—everything from the belly button down.

Hamstring tears can strike runners, sprinters, water skiers, weightlifters and any benchwarmer who comes in and then tries to leg out a ground ball. The injury is common among unprepared and unintentional athletes: pick-up basket ballers, beer-league centerfielders, and dudes running from bears.

When you tear any muscle, your body reacts. It builds scar tissue to bridge the gap. This is good and bad. It reconnects the muscle bits, but scar tissue isn't as flexible as muscle tissue.

"Scar tissue makes muscles tighter, more prone to re-injury," Moore said. "If you get too much scar tissue, you change the joint mechanics. The muscle hits its peak force later in the movement than when you don't have that mess of scar tissue in there."

If untreated, scar tissue can become permanent. A "divot" will replace the once-intact muscle. This is an aesthetic deficit, so take care of it before it changes your look. With weight training and supplementation, you can rebuild the muscle, but begin rehab immediately to mitigate long-term effects of scar tissue on mobility and muscular aesthetics.

Foam rolling is a tremendous aid to working out scar tissue and muscle tension. If this isn't part of your daily regimen, consider doing so, stat.

Exercise physiologists at ISMI also use implements from ASTYM, a company specializing in augmented soft tissue mobilization. The treatment uses plastic or metal scrapers to help straighten out the twisted fibers in scar tissue. It was developed by Ball Memorial Hospital, Ball State University and a team of researchers.

Moore said the therapy creates a sort of controlled inflammation to set up the healing process. To ease pain and slow bleeding, you take anti-inflammatory medications and ice. That eases inflammation and may reduce the pain, but it may slow down the healing too. 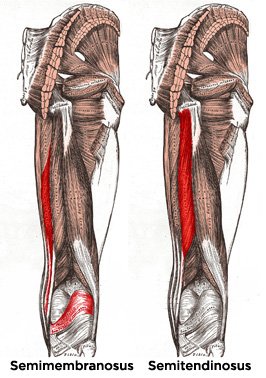 "Scar tissue is a jumbled mass of protein filaments," Moore said. "With the scraping, the stretching, and light exercise, you try to get those protein collagen filaments to line back up again, to get them in a parallel series instead of that tangled mess. They only stretch one way, and if they are all knotted up, they won't stretch."

Your muscles' ability to stretch determines your flexibility and speed. If, through therapy and exercise, you can get them lined back up, you increase range of motion.

"You will never get it all back," Moore said. "When you damage part of a muscle, other muscle fibers will help compensate for the loss of strength in those fibers—up to a point. You will always have a strength deficit."

That's a tough pill to swallow for weightlifters and bodybuilders. Injuries are difficult, and some aren't just goal-altering but life-altering.

Some minor injuries heal completely, but hamstrings are frequently re-injured as athletes compensate or re-enter competition too early. You can return to action, but, you may never run the same, and for good reason. Your running technique led to your tear. You must re-train your running style. 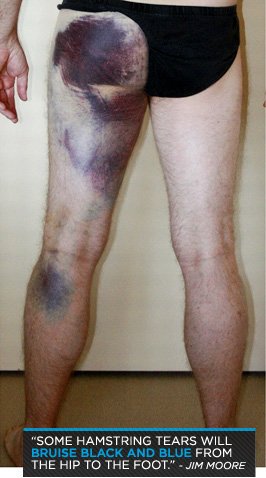 When you feel your hamstring pull, take yourself out of the game. Foolish pride can cost you months of rehab, an entire season. Slight pulls can be reversed in weeks; complete tears may take years to rehab. The more damage you do, the longer you'll sit on the shelf. Also, if you continue to play with an injury, you hurt the team. Your backup is faster than you with a pulled hammy.

"You gotta be smart enough to know when you're done," Moore said. "The athletic mindset gets you. Until they take your helmet away, your shoes away, until they cart you off, you're going to keep playing. Athletes need to realize from a team standpoint that they are there for themselves, and for the team."

It's difficult to self-diagnose a hamstring pull, especially if it's your first, but the second or third time you pull it, you'll know it when you feel it. Repeat tears typically are not as severe because you are not as fast, so the load is less. Paranoia slows you. Repeat tears elongate rehab. The hamstring tear can always get worse.

Stretching right before exercise doesn't help alleviate injuries. However, repeated bouts of stretching, over weeks and months can increase the range of motion and improve flexibility.

Immediately before a game, dynamic stretching is a little better than static stretches. Movement takes the joint through ranges of motion, under controlled circumstances. Static stretching may result in a loss of power production.

Take a 100-Meter dash. The runners are not tired, but they will pull a hamstring 60 meters into the race when their muscles fatigue. The muscle fatigues from that blast of activity, then they reach a little bit too far and they tear it.

People who are prone to muscle cramps, heavy salt sweaters, get their electrolytes out of balance and makes them more prone to pulling the muscle. Take breaks to get fluids and electrolytes back in you.

"We get track runners who pull their hamstring every year," Moore said. "They are over striding. You want a slight lean on your ankle, so your foot doesn't reach so far out, or to where you're not asking your hamstring to pull you across the ground so much. If they don't change their technique, they're going to keep pulling their hamstring." 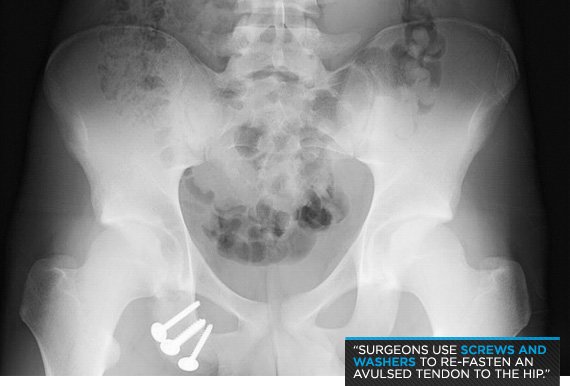 Various treatments can help you heal. Pool running helps the hips and legs; it offers resistance without impact. That's not enough, though. Doing a variety of exercises is important because the hamstrings contribute to nearly all lower-body movements.

Some new techniques for muscle repair may revolutionize rehab. Methods such as blood platelet infusions and stem-cell research have great potential to speed the process, but new ideas don't always stick until research can back it up.

"I'm old-school on it, but there's always potential to do things better," Moore said. 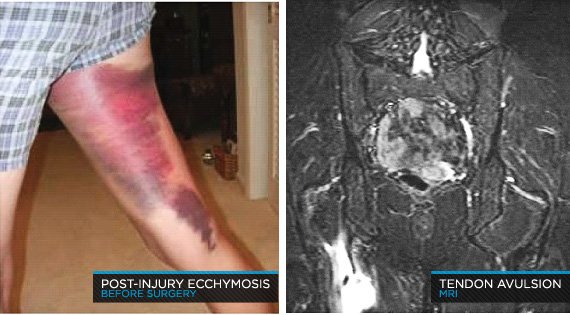 Speaking of old school, the risk of suffering these injuries grows with age. Strength and flexibility dwindle as we age, and aged tendons are less able to absorb the mechanical load, so the muscle fibers are more at risk.

"There's a point that age wins," Moore said, adding that there's no reason to give up. "Connective tissues are the first to go. Keep lifting weights. Stretch. Realize and accept that as you get older, it takes longer to recover from workouts and injuries. Memory lasts longer than muscles do."

We forget that we're not 16-years-old anymore. That's why technique training is important as we age. We need to consistently re-teach our bodies how to run with diminished or improved capacity. Our brains will learn. Our bodies will adapt. That's the anatomy of injury.