5 Ways To Turn Setbacks Into Triumph

What would you do if you were already as low as you'd ever been, and your biggest hope of getting back up was taken away in a moment? Would you give up, or get up and charge back into the fight? Here's what Rich Gaspari did.

I had accomplished just about everything I set out to do in competitive bodybuilding. My titles include Mr. America (now known as the NPC Nationals), Mr. Universe, Professional Mr. World, Arnold Schwarzenegger Classic Champion (the first ever, at that), and too many others to list here.

Sure, I had some professional disappointments too. Three times I was runner-up for the biggest and most coveted title in professional bodybuilding—Mr. Olympia. But if you come in second place to Lee Haney, a true freak of nature and a longtime friend and workout partner of mine, you still have a lot to be proud of if you know you did your best. And I knew I had.

It was 1993. Injuries had caught up with me and my professional career was clearly over. I had opened a gym that was bleeding money—and it wasn't like I had made a lot of money as a professional bodybuilder in the first place. I hadn't really prepared myself for the transition from competitor to businessman. I hadn't dug very deep on how to set up a business plan. I didn't know the real costs of running a business. I think I assumed that my work ethic and optimistic spirit would be enough.

The number at the bottom of my combined personal and business balance sheets was shrinking faster than I could think. I needed to get out from under owning the gym but couldn't find a buyer. Things quickly went from bad to worse.

To my great embarrassment, I went bankrupt.

SURVIVAL OF THE FITTEST

There I was—34 years old and moving back home to live in my mom and dad's house—starting over. I felt sorry for myself—but not for long. That's not how I was raised. I got my game face on and began the slow and painful process of rebuilding. I worked as a trainer and sold supplements on the side. As a bodybuilder, I had learned a lot about nutrition through firsthand experience and voracious study. I believed it was time to upgrade the industry, so I began working with a supplier to develop my first custom supplements.


After seven or eight months I was definitely picking up some momentum in rebuilding my finances and my new business. I began to see a light at the end of the tunnel. It wasn't long before I expanded my operations from the basement and took over Mom's garage, too. It served as my warehouse. That may not sound like much to you, but I was darned proud of my progress.

But then one day my mom's house caught on fire due to an electrical problem and burned completely to the ground. Thank God she had insurance to cover rebuilding the house and replacing her belongings. But I lost all my competition memorabilia and my entire supplement inventory—which was uninsured.

Before you shake your head and roll your eyes, just remember I already told you I hadn't made the transition to businessman yet! I know better now. I look back and laugh at myself now—but it was no laughing matter at the time. I had gone from the frying pan into the fire!

For me, getting back up meant starting in yet another basement. Somehow that seemed fitting. As a skinny 14-year-old kid who wanted to be like Arnold, my first workout room had been my parents' basement. As a 35-year-old who had lost everything, it was my mom's basement. And after the fire I moved into my brother's basement. It wasn't as nice as Mom's, but it was all I needed.

Did I have self-doubts? Sure. I had gone from a career that plastered me on TV screens and magazine covers with hundreds of thousands of fans to living off the generosity of family members. Was it time to get a "real" job and give up on this passion I still had for bodybuilding?


I actually hired on with an insurance company, went through their training program, and closed a sale on my first solo sales call. There's nothing wrong with being an insurance agent. But I knew it wasn't right for me. I wasn't done with bodybuilding. So I took the signed contract in to my boss, who was happy with me getting a sale, and I resigned. He wasn't as happy with that, but we had become friends and he understood I still had a passion for the world of bodybuilding. That doesn't mean that he and my family members didn't think I was a little crazy.

Maybe I was. After all, I still owed my supplement supplier $70,000. It felt like a fortune. But here's what I told myself: You will not fail.

It's hard to get new inventory when you haven't paid for the stuff that was destroyed in a fire. I made a promise to my supplier. I said, "I will pay you something every single week. Even if it's not much, I will pay you every cent." And I did. Why? Because I believed myself when I said, "You will not fail."

And guess what? I didn't.

5 Ways To Rebound From Setbacks

Progress in the gym, not to mention life, seldom goes exactly as planned. Here's how to turn the tables on your own setbacks.

Number one was a bit scary, right? Well, here's your safeguard. Rich Gaspari saw he could be a good insurance agent. But it took seeing that to realize he was still great at fitness and supplements—and he was only interested in being great.

When Gaspari saw his supplement supply go up in flames along with his mother's house, he could easily have interpreted his latest beat-down as a memo from the universe: "Give up on fitness. You're not allowed here anymore." Rich didn't hear that. What he heard was a voice from within saying, "You want it? You'll need to show it."

Have you ever been on one of those flights? It was supposed to be a simple four-hour cross-country jaunt, but at some point, you found yourself wide-awake at 3 a.m. on a cot in a room full of screaming infants.

One of these guys will be able to enjoy his redemption when it finally arrives. The other, as the saying goes, will always be a jerk.

Don't give in to weakness

We all know someone who got smacked around for a while by life, and then proceeded to finish the job themselves through self-destructive behavior. Here's the truth: In times of tragedy, more than ever, there's no substitute for discipline and self-control. Master these crucial skills now, and you'll help yourself down the road more than you can possibly imagine.

The world will try to tell you otherwise. The world is wrong. 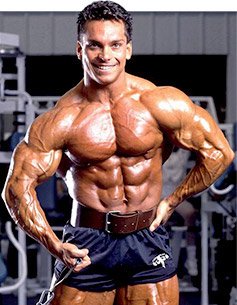 I am such a positive, energetic person that people are surprised to find out the number of setbacks I've had. When you are smiling on the cover of a magazine it doesn't tell the story of injuries and other hardships.

I have a lot to be proud of, but if there's one thing I would brag about, it wouldn't be the highest moments in my life—it would be the fact that I got back up during the lowest moments.

Are things tough for you right now? Does it feel like you have hit rock-bottom in life? Not sure you want to get back up? Do you feel defeated physically before you've even given this program a chance?

I don't want to make light of tough times for anybody, but the old adage is true: When you hit the bottom, there's no place else to go but up.