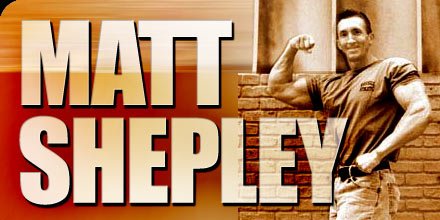 I started lifting weights the year after high school graduation. I took a one-credit class in weight training. I was amazed by the changes in my appearance in only one month. I lifted on and off for the next eight years.

I didn't get serious about bodybuilding until I was about 27. That's when I started reading all I could about nutrition and training. I jumped from 165 lbs to 220 lbs almost instantly. Within a year and a half I competed in a bodybuilding show for the first time.

After a few years of competition I began getting into physique photography and contest promotion as well. I now help run a federation (OCB - Organization of Competitive Bodybuilders), promote shows, cover events as photographer (www.mattshepley.photoreflect.com), and even publish a magazine about physique competition (Fitness & Physique - www.FitnessandPhysiqueMag.com).Age: 35
Height: 6' 2"
Weight: 225 lbs. (about 195 contest weight)
Residence: Fairfax, VA