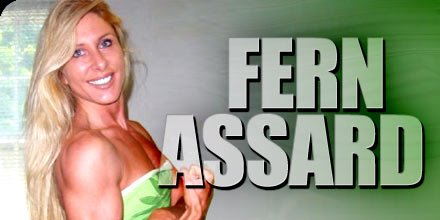 My name is Fern Assard. I am a 39-year-old divorced mother of 4 who works in a dental office by day and is a gym freak by night. My children are Nick age 19 and a US Marine, Alicia is my only daughter, she is 17 and a senior in high school. My two youngest Caleb and Sam are 12 and 7.

I decided to join a gym in April of 2006. I had always been fascinated by muscle and used to watch bodybuilding shows on television, but didn't think everyday people could look that way. I looked fine in clothes and was a size 2 at 114 lbs. When I tried to wear a swimsuit, I was so embarrassed because I was skinny/fat. I was small, was not overweight, but the sagginess and cellulite was certainly not attractive! I came across a picture of me that horrified me. I actually ended up posting it here on my BodySpace to show how far I have come. But I digress...

So, I joined the gym with my daughter. I began going 5 times a week and started on circuit machines. This meant a full body workout and some tone and firmness began to form. I gained 10 lbs in my first 4 months, but my clothes still fit and fit better!! Around November, I picked up Muscle and Fitness magazine and saw several figure competitors featured. I was hooked, THAT was what I was looking for! I didn't know that women could be so muscular and fit and not be bulky and masculine. Besides that, they were still so pretty!

I began splitting up bodyparts into 5 day splits. I competed in 3 shows in April, 1 year to the month of first joining the gym. I am normally a very shy person, but wanted to do something totally opposite of what was "normal" to me. What better way to throw yourself into something than to get on stage in a bikini in front of a couple 100 people?

My first show was FAME, I placed 1st in masters 35+ fitness model. The 2nd was an NPC figure and I placed 2nd Masters 35+. the third show was a Musclemania in which I placed 6th in figure. After my shows, I of course built more confidence in myself. I went back to the gym to gain yet more muscle to bring in a better physique in the Fall season. I am doing another NPC in November and perhaps yet another in October.

I started posting videos on BodySpace and to my amazement, people started watching them! I, like many others, were intimidated by the strange torture device looking machines and the weight room in general. My daughter had quit the gym on me and I was terrified to go back into the "man's world" that was my gym's weight room. I went late when no one was around and explored all the machine. I read magazine, poured over the Internet, I lived and breathed fitness. I couldn't afford a personal trainer, so I became my own. I believe that everyone should feel comfortable in the gym, especially the weight room!!

I was asked by Bodybuilding.com to do a series of my workouts to show other women (and men) that you can change, even when the odds are against you. I hope everyone can find something in my videos to enlighten them on the ways of the gym. We all had that heart pounding anxiety on out 1st visit alone. I am no different than anyone. So, please watch, drop by my BodySpace profile to say 'hi' and train hard!!