Weakness To Weapon: How Chad Shaw Built An Amazing Body Despite Insane Odds

His parents were told to plan his funeral, but Chad Shaw wasn’t ready to let his dreams die that easily. Instead, he did what the doctors called impossible: he became a bodybuilder.

I think my eyes are open but everything is black. What's happening? The pain is excruciating. As I try to breathe, I feel like a mouse being crushed by a boa constrictor. I'm unable to speak, but my prayer to God asks Him to heal me or let me slip away. My life is being squeezed out in the grip of an asthma attack.

Finally, I see. Tubes snake from my body to machines on either side of the hospital bed, as if I'm the subject of some twisted science experiment.

Minutes feel like hours. Days turn into weeks, and weeks into months. I gain enough strength to go home. Doctors are amazed that I pull through and survive.

This was my childhood reality.

Little did I know, this disease would be one of many seemingly insurmountable hurdles that would challenge me. I didn't think it then, but I love a good challenge…

I was first attracted to bodybuilding because it represented a realistic opportunity to turn weakness into strength. I grew up sick, frail, weak and underdeveloped. I wanted to be the opposite of all those things. I swore that one day, not only would I be healthy, but I would be powerful enough to do things most people couldn't.

By age 10, I began experiencing a great deal of back pain. A series of tests and scans revealed that I had spinal scoliosis. Furthermore, my left leg was four inches longer than my right, causing my hips and lower back to be uneven. I had to wear a four-inch heel on my right shoe.

When I returned to school on crutches following corrective leg surgery, things were tough. My leg was locked straight in an immobilizer that extended from my ankle to my hip. Kids would run up to me, spit in my face, kick my injured leg, call me all kinds of vile names and then run away, knowing I couldn't move quickly enough to fight back.

At age 11, I was depressed and full of hate. One day, my older brother allowed me to accompany him at the YMCA. It was a blessing in disguise, because it changed my life. I had never lifted, but I was instantly hooked.

Our house wasn't even a quarter-mile from the YMCA, so I began walking there daily to lift. I wasn't old enough to be in the weight room, but I would sneak in through a back entrance. I really hit the ground running when I began lifting on my own. The hate and rage drove me to push myself harder and harder, to the point where I became reckless.

I still had orthopedic problems but ignored the pain. My tenacity resulted in a major back injury. I tore four disks in the thoracic part of my spine and two more in the lumbar region. Orthopedic specialists told me to quit lifting weights altogether. They recommended surgery that would fuse steel rods to my spine, but I refused.

At the advice of my parents, I began going to a chiropractor. I persisted with treatments over one year and, to everyone's amazement, my back healed!

By the time I reached high school, I was lifting pretty hard. I spent all of my free time in the weight room. I built a lot of muscle, and my appearance took on a more menacing look. By this time, nobody dared torment me.

At age 16, I weighed 170 pounds with nine percent body fat when I entered and won my very first bodybuilding contest. Not long after that, I suffered a dislocated knee that left me incapacitated. I underwent a multitude of x-rays and scans, which eventually led to more surgery. The performing surgeon discovered that I had no anterior cruciate ligament in my right knee. Because of how deformed the bones were, I was born without an ACL in that knee.

The doctor determined my knee was too deformed to qualify for ACL replacement surgery. The dislocation shredded my medial meniscus. The doctor scoped out all the torn cartilage, leaving me with almost none.

I eventually recovered from that surgery, but suffered three more severe knee dislocations that resulted in three more surgeries to remove torn cartilage. Most recently, I had three large tumors removed from the knee. As years of hard training have passed, the arthritis in my knee has become progressively worse, making it very difficult to walk some days because of the pain caused by the chronic bone-on-bone friction. 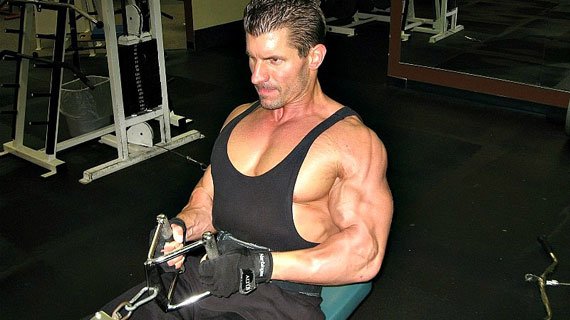 Despite numerous setbacks, Chad has always managed to pull through.

This story has a happy ending, however. At age 37, I'm in the best shape of my life. I currently weigh 193 pounds with about six percent body fat. My ultimate goal is to be the best I possibly can and demonstrate that the human spirit is capable of incredible things, regardless of circumstance. I will take every opportunity that I possibly can in order to fulfill this mission.

I've learned to count my blessings. Who would've guessed that the darkest years of my life would ultimately become the brightest? I have no regrets about any of my past struggles because they made me who I am today. Honestly, I believe my God-given desire to become a bodybuilder made me fight so hard despite such difficult and painful circumstances. 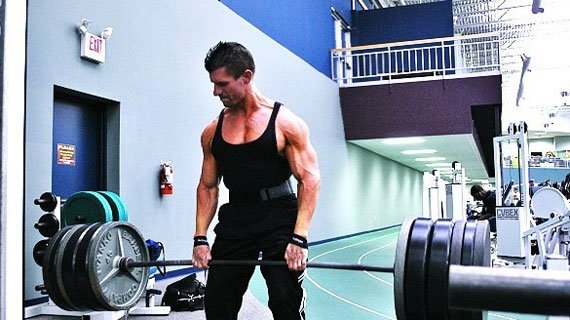 If it's true what they say - that which doesn't kill you makes you stronger - Chad must be some kind of strong by now.

Stop. You need to change the way you see yourself. We all have the capacity to make good things happen. Look at yourself as a work in progress, and you will eventually become a masterpiece.

Nutrition is important, but I find that most people obsess unnecessarily about their diets. I hear people fretting over stuff like: Should I eat a chicken breast or a salmon fillet? A handful of almonds or a teaspoon of peanut butter? High carb or low carb?

The premise of the whole issue is actually very simple. Regardless of what you eat, as long as you eat fewer calories than it takes to meet metabolic and physical activity energy requirements, you will lose fat.

Some people lost fat by taking my advice and eating what they normally eat, except they controlled their portions. They ate one-third less at each meal with the exception of green vegetables, which are often "negative calorie" food items. Don't complicate nutrition and make it more difficult than it needs to be.

Fats and carbohydrates don't necessarily make you fat. Calories consumed beyond the body's maintenance and growth requirements make you fat.

Training to a point of momentary muscle failure, at which completion of another repetition on any given set is absolutely impossible, is the best way to force the body to resort to its biochemical resources and stimulate real growth!

One of the biggest mistakes I see in the gym is when people end a set just because an arbitrary number of repetitions has been completed. This does very little to stimulate muscle growth. A set should be terminated only when your muscles have been forced to the point of failure. Any degree of effort less than 100 percent may yield a bodybuilder some results, but never to the extent that all-out maximum effort will. 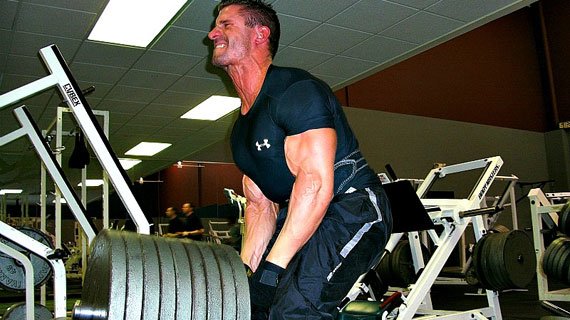 Chad can frequently found at the bar - the T bar, that is.

Let me make this perfectly clear - volume and frequency have absolutely nothing to do with intensity! High volume training can actually be counter-productive.

How do you effectively increase intensity?

Quality supplements produced by reputable brands are a wonderful asset for anyone looking to build muscle, lose fat, or increase exercise performance. Supplements are helpful for a variety of reasons, but it's important to remember they won't work the same for everyone.

You have to train properly and allow your body enough recovery time to make any meaningful progress. I see people who over-train and can't make any progress. They blame their lack of progress on supplements and don't give any consideration to the way they train, or the amount of recovery time they allow themselves. Months will pass, and they won't make progress because they:

Chad supports his training and physique goals with a variety of stellar supplements.

Before breakfast, lunch and dinner, he takes two caps of USPlabs Super Cissus Rx and one cap of USPlabs Anabolic Pump to support muscle growth and support his desired muscle-to-fat ratio. Chad takes two USPlabs Prime caps and two Optimum Opti-Men multivitamins with breakfast to support his training efforts. Two caps of Optimum CLA and HMB with breakfast, lunch and dinner help Chad promote muscle growth. Top it off with one serving of Optimum Platinum Hydrobuilder, and Chad is ready to seize the day.

A Quest Bar, along with two more USPlabs Prime caps, help Chad curb afternoon cravings and ready himself for his brutal workouts.

When Chad's workout is finished, he takes two more scoops of USPlabs Modern BCAAs and five grams of Optimum Micronized Creatine to promote recovery. Chad finishes his day off with two more USPlabs PowerFULL caps before he goes to bed.

My goal is to take every opportunity to get my knowledge out there for people to use in order for them to best meet their goals.