Learn what the different kinds of hernias are and how you could get one, if you are not careful!

Hernia: A protrusion of any viscus from its proper cavity is called a hernia. The protruded parts are generally contained in a bag, formed by the membrane with which the cavity is naturally lined. 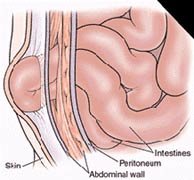 Several different types of abdominal wall hernias exist, along with a larger number of eponyms for these various types. This article reviews the pathophysiology, evaluation, and treatment of most of these hernias from an emergency medicine perspective and discusses the various surgical procedures used to repair them. Hernias are brought to the attention of an emergency physician either during a routine physical examination or when the patient has developed a complication associated with the hernia.

Luis Berrios is a bodybuilder and former Bodybuilding.com contributing writer.