We've probably all done this workout, or something like it. Maybe you began with it, or maybe you've returned to it, or maybe someday you will ...

We've probably all done this workout, or something like it. Maybe you began with it, or maybe you've returned to it or maybe someday you will. We all know it, like an old acquaintance, maybe even a friend, as it more than likely was responsible for some of our earliest muscle and strength gains. So, yeah, it's an old, comfortable friend. It's the 3-days-per-week, whole body workout.

Right now, you may think you're too advanced for that workout, even if at one time it did something for your muscle and strength, but before you stop reading and go away, you should realize that this workout is a foundation for all the other workouts you are doing or have ever done.

It is like the trunk of a great tree, and in the genealogy of workouts, all other workouts come from it, branch out from it. Reviewing this seemingly dull standard workout may reveal some of the bodybuilding treasures it holds.

And these surprising treasures may also unlock better workouts for you now and in the future, which should mean more muscle and strength for you. Can't afford to ignore that, can you?

That's it. Nothing more to it, is there? You would do this workout three times a week on non-consecutive days, usually working up from the one set per bodypart/exercise to three eventually, adding weight over time in the weeks and months you use this workout, while the workout would take anywhere from a half hour to an hour-and-a-half to complete, depending on how it's done. 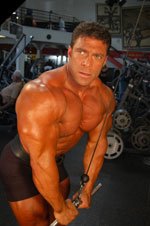 Whatever workout you're doing grew from this, whether you realize it or not. You probably at some point went into what are either variations of this workout, continuing to work out a limited number of days per week, or as most of us inevitably did, went off into split routines-sometimes sooner than we should-and continued to make progress (or not-something we'll get back to), and added, if not sets and reps, intensity, weight and so on. So why even think about that original, beginner's workout?

Think of the progress you made. Remember the whole body workout when it was your introduction into real working out. Your baptism of getting used to real sets and reps, feeling the lure of the iron for the first time, training in a systematic way, showing up for your workouts, increasing your efforts (if not always your results); you learned an enormous amount about working out, about yourself, and you probably made a larger percentage of your gains on that workout than on any other.

Oh sure, you may think, that's just because you had so far to go. Yet if you hadn't mastered that workout, you wouldn't have gone on to greater gains.

The whole body workout works for beginners not only because they are new to bodybuilding, as if they are fresh soil in which to plant the seeds of growing muscle, but because the workout itself has, like so many deceptively simple things, so much more to offer than it first appears. What are some of these things?

The three times weekly, one major/compound exercise per bodypart workout is one that tends to keep the possibilities of overtraining down. Yes, while it's possible to overtrain on it, more easily for some trainees than others, it does not offer the more obvious pitfalls of excessive volume (less common in today's workouts, admittedly, than in the decades of the 60s, 70s, and 80s) but also it does not overload the trainee with, well, excessive overload.

There are no single reps (1 RM), forced reps, partials, burns, power rack work, negatives, etc., and if the beginner is wisely-trained by someone, training to failure is not allowed or encouraged at that stage. So one reason the beginner grows and progresses is because he isn't overtrained.

Look what's included: Benches, squats, rows-basic, compound, productive stuff. It's true there are some beginners who are so weak they need remedial work and even the compound exercises are too much for them, but this is rare, usually confined to ultra-hard gainers or people with injuries or medical or other disabilities. 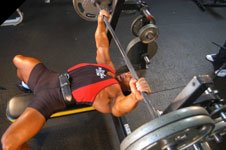 For them, remedial or rehabilitation training would be necessary first. But the beauty of the basic exercises is that they can, obviously, be adjusted to the strength level of the beginner, yet the trainee can learn good form and technique with repeated application, as opposed to trying to master the intricacies of some of the more complicated stuff we see and do in the gym.

And trying to improve form or technique while using maximum weight/reps is not easy, nor recommended. The exercise selection is also good for what it is not: it is not the peripheral stuff, or more accurately, exercises that will only or perhaps later have value after some of the basics are learned, even mastered.

There are all kinds of rep schemes in bodybuilding, and almost all of them have some value, depending on their application. Yet eight to twelve reps for muscle hypertrophy (i.e., increasing the mass or size of the muscle), would almost have to be considered a time-tested standard.

This rep range can be used to practice form and technique, while using moderate weights (not excessively heavy, which can cause injuries not only with beginners but with all of us), yet the trainee, though he is not killing himself /herself with effort, usually gains, sometimes substantially.

And it's not just because he or she is a neophyte. Look at the technique and the gradual progression (lately a wrongly scorned approach) of some recent beginner who's making gains, and you may want to apply some of what they're doing to your own supposedly super-advanced training.

The above rep range with a couple of sets lends itself to the use of moderate poundages. The trainee grows and doesn't expend excessive effort doing so. Now it's true after a time progress in exercise poundages will become more difficult, but why work your body with excessive effort if it's gaining as much or more with less effort?

This workout can teach us or remind us of that principle of efficient effort. Once a beginner is progressing, they, in effect, make maximum progress without wasting any effort.

What most of us end up doing is expending more and more effort and energy for less and less in the way of results. This whole body classic, on the other hand, is an efficient workout.

There are many frequencies, or times per week (or weeks) in which to work a lift or a muscle group, and many of these are productive, some being more productive at times than others, again depending on the specific need and individual abilities.

Three-times-per-week used to be the standard for working the muscles, back in the age-old drug-free (or low dosage) days of the 40s, 50s and even the early 60s.

While it is usually too often for more advanced trainees (though there are ways to make it work even then), and less and less frequent working of the muscle groups/lifts has been a decades-long trend (you can get good results or no results with very infrequent training), there is still a lot of value in training a muscle group three times per week.

There are specific ways to do it successfully, and this workout contains them. Return to the first point about controlled stress. There is a synergy at play here. All these factors, not just one, make it work.

If you were to add forced reps or try to do max doubles or triples (which can work in other select bodybuilding, not just strength, workouts) every workout, most bodybuilders would end up quickly overtrained, probably injured and not too happy.

Two things have given this workout a kind of bad name. One, it is seen as kind of a bland, plain vanilla, nothing workout, especially by advanced trainees. We hope you're re-thinking that.

Two (and this has more merit) it's too rigid, doesn't give you enough options and alternatives. There's some truth in that. For example, when most of us felt we were outgrowing this workout, we started adding sets and reps, sometimes a lot, until we could no longer work our whole body in one workout. Then we had to split the workout just to get through it and get out of the gym.

So we did. But before you do that, you can-carefully-intensify it instead. This doesn't mean adding every intensity technique you can think of, but you can, for example, include a lower rep, heavier set in squats, benches, rows, especially or you can pick one of the three days and train heavy on one of the lifts while keeping your other work moderate.

These small changes can add a lot and continue to coax gains when they otherwise would stall. You can also change the exercises somewhat; you can try exercise variations, for example include inclines, still a mass exercise yet one which will give more shape where usually needed, instead of benches, one or all of the workouts; you can change your squat style, doing parallels one day, Olympic high-bar squats another, front squats or leg presses or whatever other productive compound leg exercise you can think of in still another.

Not enough bodybuilders (and lifters) exploit the potential of this style of variety in their workouts. And although fewer still powerlifters and strength specialists seldom use the whole-body, 3-day-per-week workout, some did in the past-Olympic lifters and even some early powerlifters. It's worth experimenting with, don't overlook it.

With the combination of things you are doing, sets, reps, form, poundages, different (or the same exercises), you can keep within the framework of this 3-times-per-week, whole body basic workout and extract great gains.

You can learn to get a pump (something almost forgotten, neglected, also scorned with today's heavy/intensity only mentality), you can gain strength and muscle and gradually progress to heavier weights with a minimal risk of injury, learn which exercises work best for you, improve your form and technique, (something also very lacking with many of today's bodybuilders, which holds back drug-free trainers' gains), and incorporate advanced techniques in a more measured, restrained way, which will also help you evaluate what works for you and what doesn't.

So you can see now there are many great features to this common, standard workout. And not just for beginners or intermediates, either. Advanced bodybuilders can return to this workout as a refresher; it will be a different stress, and working the muscle groups more frequently yet not pounding them into absolute submission will not only be a tonic, a break from super-intensity, but it may promote gains, also.

Advanced bodybuilders can also cut out some of the junk exercises and sets they may have grown accustomed to using. At the least, they can even take a break from what are even normally productive, needed isolation exercises which they have overused. When they return to them later, those exercises will be more productive.

This workout is concentrated enough to cause a renewal of focus, without the over-stress of some of the super-intensity workouts.

Three sets of eight fairly-heavy reps of parallel squats, for example, performed with intense concentration, focus, in as nearly perfect form as you can manage, will be difficult in a different, though surprisingly productive way, than an all-out power, low-rep set or max intensity set. Yes, it's an open secret, advanced men can gain muscle on this timeless, classic workout.

Be sure to also check out:
Non-Gym Workouts For Great Gains!

Take Care, And Remember ... Finally Get Your Life Back ... And Train Bare Minimally,

Greg Sushinsky is a natural bodybuilder who has trained for over thirty years. He is a professional writer who has written extensively about bodybuil