Greg Sushinsky is a natural bodybuilder who has trained for over thirty years. He is a professional writer who has written extensively about bodybuilding, with numerous training articles appearing in Musclemag International, Ironman magazine, and others. With his articles, he has provided training instruction and information based on his extensive personal experience and research.

He has competed as a powerlifter and a bodybuilder, and continues to train seriously, write and instruct as a means of promoting the principles and ideas of natural bodybuilding, fitness, health and nutrition.

Greg Sushinsky began weight-training in 1968 at the age of 16, as a 5' 11" tall, 133 pounder, who simply wanted to get a little bigger and stronger. He played a lot of sports informally, but had done no weight-training up until that time, and had to teach himself how to do it by reading the instructions in a weight-training book.

Although he struggled with this mysterious new physical activity, the very thin, light-structured hard gainer soon was enthralled with the challenge of weight-training, and every workout in the basement of his parents' family home became an iron adventure.

Gains in strength and muscle size were slow, and often did not come via the accepted methods. So, he read and studied all that he could find on weight-training, strength and bodybuilding, and modified exercises, training methods and eating approaches, until this, along with hard work on his workouts, began to yield some results.

Although he once was told by a fellow student in eleventh grade he was the "skinniest guy in their class," he continued to lift weights throughout the rest of high school, and despite his light frame and fast metabolism, made gains in size and strength even though most of his body's energy was utilized in still growing taller. By the time he graduated from high school, he was 6' 1", and had managed to put on almost 30 pounds.

In college, at Bowling Green State University in Ohio, along with classes and outside activities, he continued to train, at the BG weight room-which had good basic equipment and a good atmosphere for hard training.

More importantly, he came into contact with more experienced lifters and bodybuilders with whom he trained very hard and from whom he learned a great deal. With great enthusiasm-an almost fanatical devotion to his workouts-- by his junior year he had begun training in powerlifting, and he eventually built up to 215-220 pounds.

He always included bodybuilding exercises, as at the time (early 1970's) and in that part of the country (the midwest), most bodybuilders combined some form of strength training, if not powerlifting, with their bodybuilding. But at this point, he was mainly training for strength, size and powerlifting.

Even then, he continued to experiment-out of necessity, as he always had to modify the training and eating approaches so they'd work for him, often coming up with innovative techniques and ideas. He borrowed and learned from anyone and anywhere.

He also at this time began informally to help train others and share with them the results of his ongoing unique approaches. Although he had begun with probably less potential than anyone, he later took a second place in the 220 lb. class at a powerlifting meet.

He had come a long way. (Some of his best strict lifts in these years of training, at a bodyweight of around 210, included 3 reps with 470 in a below parallel power squat, and a very strong 1 rep with 500 in the deadlift, with a double at 490, a triple at 480, front squats for reps with over 300 pounds, bench presses for reps 250-300 lbs, and reps on bentover rows with 250. Modest poundages perhaps, but achieved by a drug-free hard gainer.)

A while later, he realized that although he greatly enjoyed the strength and powerlifting training, his real passion and long term interest would be bodybuilding. He assessed his ultimate potential, though meager, as being far better for bodybuilding than powerlifting.

While he continued to include strength exercises, he began shifting his training more to a bodybuilding intensive regimen utilizing more moderate poundages, and again, kept experimenting to keep making progress. He has continued this kind of training approach over the many years and does so still today.

Although a better bodybuilder than powerlifter, while competing briefly in both, his real ability consisted of getting nearly as much out of his limited potential as possible, and he has helped others get on that similar path by his writings, through many articles in many publications.

In college, although he majored in philosophy (and graduated with a degree in it), a long time passion was writing. He went to work as a freelance writer, contributing not only to bodybuilding and fitness magazines, but to many sports magazines as well.

His writing has been included in a bodybuilding anthology. He also wrote and self-published The Natural Bodybuilding Training Manual and has just recently completed and published The Hard Gainer Report.

For over five years he was one of the main writers as a contributing editor for the Preview Sports line of sports annuals, where he wrote extensively on professional football, basketball and baseball, as well as some on college sports. He wrote essays, columns, team previews, features and profiles, as well as journalistic commentary, and humor pieces.

He also authored and was associate editor on two complete digests, one on fitness walking and the other an herbal guide, published by GCR. He was the main writer for two commemorative magazines on the late race driver Dale Earnhardt published by Celebrity Worldwide.

Greg Sushinsky continues to train hard and enthusiastically at age 51, where he strives to maintain a lean, proportionate physique (usually at 200-205 pounds), write and publish on bodybuilding, and continues to do and pursue many writing and publishing projects in his other areas of interest. He lives in the Cleveland, Ohio area with his wife.

Visit his website at: www.gregsushinsky.com.Click On The Thumbnails To Enlarge The Pictures! 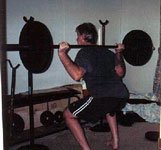