Stephanie Toomey's life hasn't been easy, but nothing worthwhile is. Get inspired by her love of fitness and no-nonsense attitude toward becoming the best woman and mother she can be.

Some people get through life relatively unscathed. Yes, they may have to deal with short bouts of loss, heartbreak, or pain, but those are normal life circumstances. Stephanie Toomey is not one of those people. She's been through tragedy, and she's overcome every obstacle. She leads a fit life because she's driven to lead her best life.

Although Stephanie has dealt with more in her 29 years than most people would in four lifetimes, she hasn't given up or backed down. Instead, she's become a survivor. She's become a woman who will stop at nothing to live fit, train to the limit, and create a great life for herself and her son. Stephanie is an inspiration; this is her full fitness story.

Although she has a body worth a million photographs, Stephanie's main goals are performance-based. Learn how this figure-turned-CrossFit athlete stays fit year-round.

A good nutrition plan takes careful planning and smart rationing. Find out how Stephanie gets the most out of her food so she can train hard and have enough energy to educate her son and earn her college degree!

Every body is different, and so is everyone's favorite supplement stack. Stephanie's stack works great for her, but she'd encourage you to listen to your body and find out what it needs!
Earning Her Stripes ///

As an elite high school softball player, Stephanie had the opportunity to play at a Division-I college. However, during her senior year of high school, Stephanie's mother was admitted to in-patient therapy for cancer, and Stephanie put her dreams of college ball on hold.

She enlisted in the United States Marine Corps and remained on active duty for eight and a half years. During her time in the USMC, Stephanie was deployed three times, played on the All-Marine and All-Armed Forces softball teams, and began a weight training routine that sparked her journey into fitness.

"I wanted to challenge my body with weightlifting," Toomey says. "So, before I was deployed, I bought Arnold's Encyclopedia of Modern Bodybuilding. I had all my c-bags, my pack, and my rifles slung ready to manifest on the airplane. In my hand, I had Arnold's book."

To learn how to isolate muscles and do the actual lifts, Stephanie read and learned. "I had no clue how to train, and we had limited equipment. I got a barbell, two [45-pound] plates, and two 25-pound plates. I had to be creative. I did reverse hyperextensions off a Humvee, and I did a lot of pull-ups. I came back from [my first tour] pretty strong." 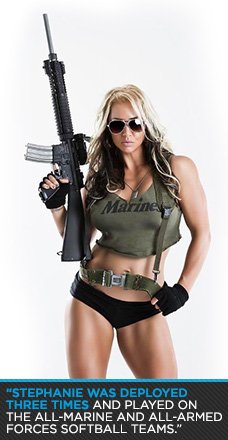 When she was 21 years old, Stephanie learned that her mother was admitted to a hospice. "I went to see her, and she sat me down, and she told me that she was going to die. Three months later, she died in my arms." One year later, Stephanie found out she was pregnant. "I felt my life was over. I didn't tell anybody. I continued to do all my duties as a Marine."

Five months later, her son's biological father showed up and told her he wanted to be a family. He moved in, but Stephanie paid all the bills. "One night he came in the middle of the night, choked me, poured hot coffee over my head, and said, 'I don't ever want you to ask me what I've been doing or where I've been. I'll come here when I want.'" From that day, Stephanie says she was "living in hell."

She spent her pregnancy afraid and detached from impending motherhood. When her water broke in her third trimester, she called her son's father. He said, "I'm not a doctor. Go to the hospital." So, she drove herself to the hospital. "I really didn't have anybody to tell; I gave birth alone," Stephanie says.

"I promised my son that, no matter what, I'd do whatever I could to give him an opportunity," she says. "I wanted him to be able to do whatever he wanted in his life. It took me having my son and seeing him to realize that I'm not just responsible for my own health or reputation. It was all about him."

"When I was in the Marine Corps, I sat in a class taught by a crusty sergeant who told us that motivation is the worst word. He said, '[Motivation] is like a shot. You take it, and you run around happy, and then it's worn off. After it's gone, you're worse than you were before, or you have a really bad hangover.' I thought he was just running his mouth, but then he came back with: 'Instead, look for something that inspires you.'"

Stephanie became someone who inspires. She hopes people won't see her stage-ready photos and assume they can't do it. "Everyone has a story," she says. "Life's hard. If I can be an inspirational voice or tool, then I want to use that. I don't want it to go unnoticed."

Q
You've done a lot and made many tough decisions with a fairly limited support system. What do you think that's done for you?

My life has not been a walk in the park. Not having key people in my life, like parents or a spouse, has made things a bit challenging. But, I feel that it's truly helped me grow as a person and athlete. I can function and do anything alone. I have no problems finishing things that I set my heart and mind to.

Why did you enlist in the Marines?

I enlisted in the USMC because at the time I did not have any sort of structure in my life. My older brother was an active-duty Marine and I saw how it was providing him choices and security that I didn't have.

Looking back at the time I spent in the Marine Corps, there's no question that it provided me with lessons I will hold close for the rest of my life. Responsibilities an 18-year-old Marine has are far beyond those of what many people would have in a lifetime.

Do you prefer performance fitness to physique fitness? What do you say to people who are more concerned about how they look than how they perform?

My whole life has depended on how well I did things. I always had to perform or make things happen in my life just to survive. I played sports my whole life and I always wanted to be better than the day before. I would practice and drill the mechanics of the position or game I was training for. 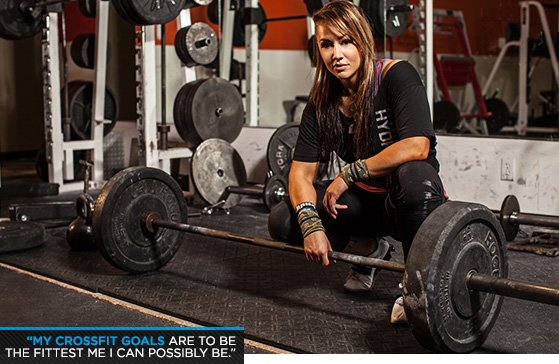 I started doing figure purely because of the results of the training I was doing. Once training became secondary and how I looked became the most important, I decided that figure was no longer my interest. I needed a competitive sport to fill the void.

I really have no opinion for those who prefer to look strong and healthy rather than being strong and healthy. The only thing I would say from one fitness professional to another would be: "Be honest with what you do to look a certain way. There are people who look up to you and, if you are setting unreachable goals, it can very much discourage them."

What are your goals for CrossFit?

My CrossFit goals are to be the fittest me I can possibly be. I will be turning 30 in 10 months and plan to be in the best physical shape possible. I did the Open WODs and it was a great way to see where I was and how I compared to other athletes. I have a new plan and am working really hard to make it to Regionals next year.

I will be competing at the Garage Games in Virginia Beach in August. I will also be running a half marathon soon and hope to run the Marine Corps Marathon in October.