One little compliment changed his life. Find out how David Otunga transformed from a chubby nerd into a muscle-bound professional wrestler and actor!

Celebrity status may be passing for some, but intelligence, drive, fire, and strength make a life-long impression. David Otunga has all these qualities, plus the added spice of a busy celebrity lifestyle. What makes David someone to respect is not necessarily his stint in reality television, his acting ability, or his WWE superstardom, but his unbeatable determination to be the best man he can be.

In the gym, and in life, David goes all out. He lives every minute with intensity and maximum energy. It is this energy that has fueled an extraordinary life. Yes, he's insanely busy; yes, he spends a lot of time on the road; but his life is rewarding, fun, and allows him to spread his love of health and fitness all over the world.

David wasn't always famous; he hasn't always lived inside a ripped, muscular frame. He created his body and his identity through an intense desire to live the best life he could. And that is something everyone can admire and emulate.

You'd think four or five days of professional wrestling would be enough training for one man, but not David Otunga. Follow his fast-paced, bodybuilding-style regimen.

Lean protein, complex carbs, and a positive attitude have helped David Otunga earn his award-winning physique. Get the details about his nutrition plan!

David Otunga takes in 250 grams of protein each day. Without some help from supplementation, he'd spend his entire day eating! Check out the rest of his supp stack.

From School Nerd To Celebrity

David hasn't always looked this way. When he was a kid, he was short, chubby, and wore thick glasses. As if that wasn't enough, he did well in school and was labeled a "nerd." He was also bullied by the bigger, athletic, more popular kids.

By the time he was in his teens, David wondered if some muscle could help him. "It seemed like everyone was athletic and buff; I wasn't. I didn't understand what I was doing wrong and what they were doing right. So, I asked myself, 'What if I start working out?'"

During his freshman year of high school, David decided to start taking weight training more seriously. So, he got some old-school, plastic-coated cement weights and an EZ-bar from his friend's brother and began training. He alternated doing 10-by-10 curls and push-ups every single night.

As he got better at his regimen, he would increase the weight or increase the reps. Three or four weeks later, David says he remembers feeling better, but didn't really see any difference in his physique. That is, until one day he saw a girl he knew from class at the mall. She grabbed his arm and exclaimed, "David, you're getting muscles in your arms!"

"That was it," says David. "All I could think was: Oh my gosh, it's working." From that moment, David was motivated to transform. He came home from school, worked out for an hour or two, and then hit the books. Every day. "I couldn't even hang out at the mall. I just wanted to go straight home and do more push-ups and curls because I knew it was working." 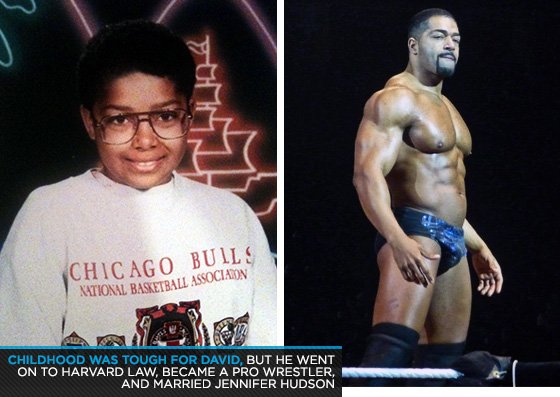 "It's amazing when I think about it," says David. "Just that one single compliment led to so much. After that, working out became my lifestyle." He continued to train every day throughout high school, through college, and even during law school. He even lived fitness when he was a busy lawyer at a prestigious firm. "I would take my lunch break, go to the gym, then eat my chicken breast at the office."

During his life as a lawyer, David decided he'd rather follow his dreams and pursue a career in entertainment. He starred in VH1's I Love New York 2. After that, he wondered what he could do with his newfound fame. He decided upon professional wrestling. Now, fitness is David's life. It's his job. As a WWE Superstar, he has to have a great physique, he has to be in shape, and he has to maintain an ever-determined mindset.

He says that bodybuilding and working out has added much happiness and success to his life. "It's helped me reach dreams I never thought were possible. It's helped me work hard in school, in work, in athletic endeavors, in WWE, and even in acting." David also uses his passion for fitness and health to inspire others. He encourages all people to reach for their dreams. "Whatever it is," David says, "go after it."

Q
Can you give us any fun facts about the WWE?

I'm not allowed to say much. Our live action entertainment is storyline driven and involves a great deal of improvisation.

Are you around a group of people who are fit-minded like you are? In other words, do you have a good support system? 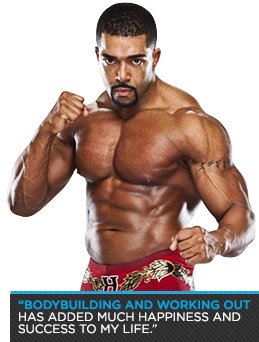 Fitness has always been something that I do for myself; and I have never needed someone to push me to stick to a healthy lifestyle.

That being said, I have an excellent support system in my family and friends. They all know that I am very health-conscious and encourage me to maintain my healthy eating habits even if they don't necessarily follow the same guidelines.

There are times when I'm out at a restaurant and my sister might tell me, "Don't eat that, there's sugar in there." Or, "I think there's butter in that sauce, so you should avoid it."

You're a highly educated person. Do you think that has helped your fitness achievements?

Thank you for the compliment. I can't say for sure, but I do know that I have an intense passion for health and fitness and I like to know how and why certain foods affect our bodies. I get kind of nerdy and even read about it on the molecular level. It may not be very interesting to most people, but I enjoy learning about it.

What are you most proud of?

Out of everything I have done in my life, I'm most proud of being a father to my 3-year-old son David Jr. He inspires me to be the best person I can be and to set an excellent example for him.