The fit body battles between physical wants. Strength and aesthetics battle in a muscleman's goals. Meet Colton Leonard, who fused the two desires into one behemoth body.

Twice in his young life, Colton Leonard has been hit with such terrifying forces that he's had to adjust his plans and begin life anew. His body and soul were affected. Even so, through it all, he has faced down adversity, improved his training, and rebuilt himself stronger than he was before.

Colton traded the football for the iron, and then the life of a bodybuilder for the strongman's Atlas stone. These sports may have widely different training, but at their heart, they all require the same fearless spirit and fortitude. Colton Leonard's fitness 360 is the story of a man stronger than any challenge.

Colton Leonard has built a massive frame through hard work and detailed eating. To feed his machine, he eats … a lot. Check out his nutrition plan to see how strongmen consume!

Colton Leonard built a massive frame by lifting hard and eating smart, but that doesn't cover it all! Check out his supplement regimen to see how he restores his reserves!
Colton's Progression to Power ///

Lifting has always been a outlet for Colton Leonard to release tension, anger, and frustration. Growing up, things weren't always easy for this great man of strength. He wasn't always the beast he is now.

He began weightlifting over the summer before his junior year of high school, looking to get bigger and stronger for the toil of the upcoming football season. He also worked as a lifeguard over the summers, and on his breaks he would read both Flex and Muscular Development.

During his lunch hour, he would go into the clubhouse and work out. Those summer workouts consisted of every exercise he was reading about in the magazines. He immediately put knowledge into action, dismissing any worries about overtraining. He just loved the weights.

Leonard's effort in the summer slapped some substantial muscle mass on his bones. When football season rolled around, he was ready! However, fate didn't support his dreams of gridiron domination.

"I took a bad hit three weeks from the end of my senior football season. I suffered a career-ending blow to my neck," Colton says. "I lost any hopes of a scholarship and the schools I had been speaking with were no longer interested. I had two choices: undergo surgery and play next season, or avoid contact sports for the rest of my life."

He chose to give up football, because he suspected his body couldn't take another big blow. This left Leonard at a crossroads as he left high school.

"I could be the 'I used to' guy, or I could put all my energy in something else that excited me," Leonard says. "I remembered all the fun I had while training over the summer, and I knew bodybuilding was my answer."

He began seriously lifting with bodybuilding principles to guide his nutrition and training. A few months in, he made a friend in Nick Del Toro. The two were close in age, but Nick had competed since he was 16 years old. They began to train together, and after Leonard gained a little weight, he decided to enter his first bodybuilding show.

"I really worked hard for my first show," Leonard says. "I worked so hard, for so long, and I realized afterward that what I prepared for was over in fewer than 10 hours. I decided that if I was going to work that much, I was going to make sure it was for more than just a local show." 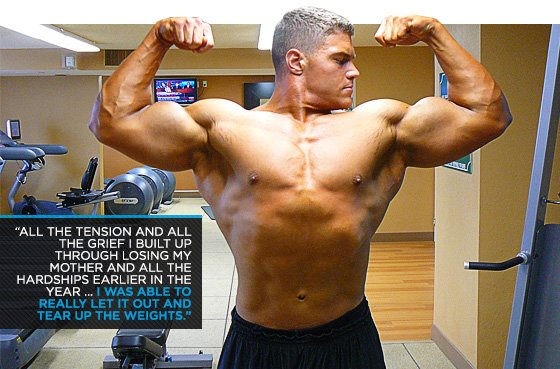 He decided to reach higher and compete in the 2008 Teen Nationals, where he placed second in the Teen Men's heavyweight division. A year later he landed in fifth place at the 2009 Collegiate Nationals.

"I felt that with the proper devotion, the sky was the limit for me in the bodybuilding circuit," Leonard says. "Little did I know that my most difficult challenges still lay ahead. In February of 2011 I received one of the scariest phone calls of my life. My father was crying, and he said "Your mother has gone home." His mother, Marianne Leonard, had died of a sudden heart attack at the age of 52.

"My motivation, drive, and all the things I prided myself on were gone," Leonard says. "I kept trying to get back to training and show prep, but I had no willpower. My crutch was food, and gluttony became my sin. I continued to work out, but I wasn't on the same level as before."

It wasn't until almost a year later that another friend, a minister by the name of Stephen Mackey, introduced Colton to strongman competitions. This sport would reinvent the Texas giant.

"I had been walking through my workouts," Leonard says. "I decided a change of pace would be good for a little while. To my surprise, strongman pulled me out of the slump I had been in for so long."

Strongman training is unlike any other sport, and its specific demands require precise and intense training. Colton wanted to jump into a contest right away, but he soon he realized that he was not yet strong enough. 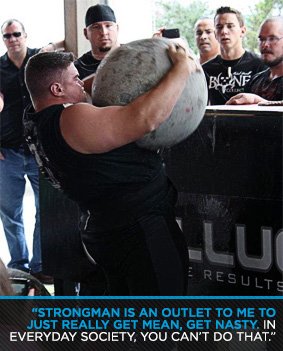 "I had to make a change to my training or I was going to face embarrassment," Leonard says. "If you have ever trained strongman before, you know you can't be a wimp. The training causes you to find new mental toughness you never knew existed.

"My intensity jumped through the roof in a matter of days with this new training style. I found passion again. I trained hard and I trained often to get used to all the new implements. I got stronger, but I was getting bigger too. I found the motivation to get my diet and supplementation back on track."

Leonard's first competition was a qualifier for the 2012 NAS National Championship. He figured—as he did initially with bodybuilding competitions—that if he was going to do something, he was going to go for the ultimate challenge.

He fought off advances from far more experienced competitors, and to his surprise, he won his first contest and earned a spot in the 2012 NAS Nationals.

"I stepped up my training and mental toughness even more," Leonard says. "The weights there were beyond what I ever thought I could do, but I finished every event and landed in the middle to top quarter of the pack for each event. It was a great achievement for having spent such a short time in the sport."

At the NAS Championship in 2012, he faced down monstrous weights: a 390-pound Atlas stone, 210-pound dumbbell and a 410-pound Husafell-Stone carry!

"I even considered sitting out because the weight was so heavy," Leonard admits. "I was more prepared than I thought. I did well on every event, staying in the top 15 up until the last event! I ended up falling to 18th overall after the second day of competition. It was a great improvement from last year."

His placing qualified him as an alternate for the Arnold Sports Festival Arnold Amateur World Championship. With just three weeks out from the Arnold, he received his invitation.

"The competition was the heaviest yet," Leonard says. "I knew it was going to be difficult. I dug deep and fought hard. I was in the top 10 of the top 50 amateur competitors in the world up until the last event that day. I finished in 14th, a placing I was very happy with."

After his incredible debut, 2013 is on track to be the best year yet for this young strongman. He quickly structured a new program based on what he learned from the big names at the NAS Championship last year, and he is on the road back to the same competition and aiming to move up in the standings.

Q
What is the heaviest object you've ever lifted?

I would have to say the heaviest object I ever lifted was a 950-pound yoke. This is basically an implement where the weight is fixed and hanging off your back. The bar sits on your upper back similar to a squat bar. You lift the weight roughly 6-8 inches off the ground and go for a walk.

I would have to say the most difficult heavy object I've lifted was a 410-pound Husafell stone at last year's Nationals. You have to awkwardly hoist this tombstone-shaped block up from the ground to your chest and then go for a walk for maximum distance. Last year I was able to travel roughly 160 feet with the 410-pound stone.

Toward the end of this max carry, your body starts to shut down on you. Your glutes and hamstrings are on fire, you start stumbling because you can't feel your feet, and you begin to black out. It is a heck of an event!

You put on 100 pounds of good mass since you stopped bodybuilding. Do you ever long for that cut body you developed for competition?

I miss it all the time. Who doesn't want to walk around with abs? Honestly, though, I have a newfound love for strength and performance athletes. When I was bodybuilding, I just looked good. I want to find a happy medium: to be strong, able to perform well, and to look good doing it. 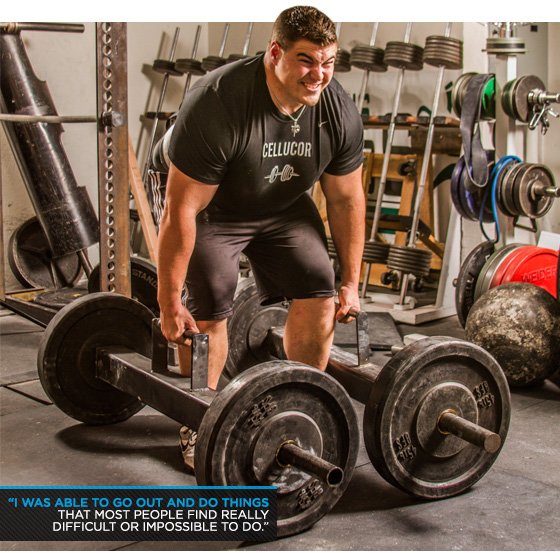 Which strongman has inspired you the most, and have you met him?

I am inspired by good people who are successful in their given sports. I would have to say that I am truly inspired by Bill Kazmaier. His approach to the sport was amazing. He was truly one of the most intense lifters I have ever seen.

During a World's Strongest Man Competition, back when they used to have sumo wrestling in the competitions, his facial expressions were so intense he actually ran another competitor out of the ring! He had a mental control over attitude. He knew he was going to complete a lift even before touching the bar. I was fortunate to meet Kaz and shake his hand. He is an all-around good guy. It was a great experience.

Your size makes you look like an absolute brute, but do you have a softer side?

Every man has a soft side whether he likes to admit it or not. I am a very nice guy, and I convinced my wife to marry me, so I must be doing something right! I actually work in customer service too, so being nice is the name of the game!

Do you think you have what it takes to be the World's Strongest Man?

I'd be lying if I said no. But that would take a lot of other factors to fall in line as well. Right now I am focused on my career and my family. But who knows what the next few years hold.

If you want to learn more about Colton Leonard, or more about strongman, please feel free to contact him. You can find him here on Bodybuilding.com on BodySpace or you can hit him up on Facebook or Twitter. If you want more great articles or videos and content like this, make sure to keep coming back to Bodybuilding.com.