Carl Roberts won our 2012 Military Transformation Challenge, and now he is a personal trainer, helping to propel his clients forward with their fitness.

Carl Roberts, a United States Marine, isn't the biggest guy. Never was. But this Afghanistan veteran found a way to gain 50 pounds of lean mass while defending our nation with honor and valor. In our judgment, that makes Roberts one certified badass.

On the heels of those efforts, Roberts won the 2012 Military Transformation Challenge at Bodybuilding.com.

Now that he is back stateside, he's a personal trainer, using his diminutive past to propel his clients into a massive future.

Read his story, sign up for the 2013 contest, and you too can share your story of success!

In high school, Carl Roberts weighed 98 pounds. Yet he still tried out for the football team as a freshman. He washed out in a month, too small to make much of an impact.

Like many high school graduates in search of a direction, Roberts enlisted in the Marine Corps straight out of high school. Suddenly, he was among some of the baddest men on the planet. Being small is OK; being weak is not. His brothers in arms dragged him to the gym, put iron in his fists and set him to work. Carl responded well to the positive reinforcement.

"In the Marine Corps, it's a big thing to stay active and stay in shape," Roberts says. "It became a big part of my life to be more active, to put on more mass."

His first tour began in Okinawa, Japan. He tried boxing and worked with a coach that first year. Toward the end of his second year in Okinawa he started transitioning from daily boxing to weight training, hitting the iron hard.

"I had a roommate and a couple of guys who I stayed with who were big gym rats," Roberts says. "At first when I would go with them I basically had no knowledge of what to do lifting weights. I'd go in and take the heaviest weight I could lift, do it four times, then move on to another machine. They gave me the basics and the guidelines, showed me the compound movements and the right things to do."

In time, Carl made fitness a habit: work, chow, gym, and repeat.

To win the military transformation challenge, Carl Roberts rededicated his civilian life to match the effort he gave in the Marines.

Carl Roberts made his huge physical change while stationed with the U.S. Marines. But his greatest transformation came when he dialed in his nutrition.

To pack on 50 pounds of muscle you can't just gobble junk, you must eat right, exercise, and balance it all with proper supplementation. Witness Carl Roberts.

Boots on the Ground

Carl built physical strength to match the mental integrity he always had inside him. He transferred from active duty to the U.S. Marines Reserves. Soon after he was activated and deployed to Afghanistan for a 12-month tour of duty.

Marines are powerful men and women. They take on incredible responsibilities in uncommon terrain with combatants potentially around every corner. The muscle Carl gained helped him get through his deployment, and again he was sent home, away from the brotherhood that helped him build his new body, away from rigid structure. 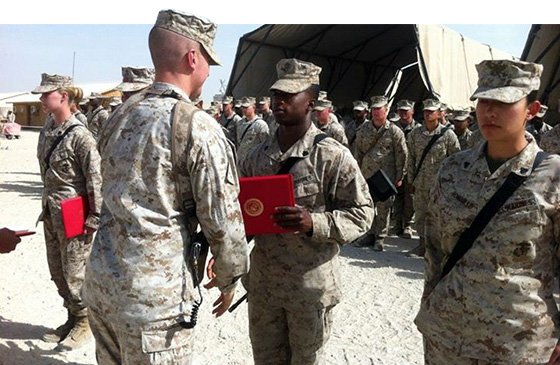 Carl was promoted to Sergeant in Afghanistan during Operation Enduring Freedom in 2012.

"Once I came back from that deployment, I transferred out of the Marine Corps, and I got … depressed," Roberts says. "It was a hard time for me once I got out of the military. It was a big part of my life and it's all I had known. I stopped working out. I was just sitting at home, hanging out, and I just basically got into real bad shape."

He had to take a long, hard look at himself. It didn't take him long to see what he needed: "I just kicked myself in the butt and got right back into the gym."

Soon after his return to the weight room, Carl was Googling his way through the Internet and stumbled upon the Military Transformation Challenge on Bodybuilding.com. "I figured why not choose this as a beginning to get myself back into shape?" Roberts says. "It gave me a goal to reach for, something to motivate me."

The motivation paid off big for Carl. He went on to win the challenge and took home the prize money. Now he is set up as a personal trainer and wants to share his story and his newly gained expertise to help others.

Are Marines as tough as they say they are?

Yes the Marines are, and they're not ashamed to prove it. It's a brotherhood that you can depend on and trust they'll be on your side. You can count on a Marine to get the job done by any means necessary. The Marines are the only organization that acts as a family even outside of combat. A Marine will go out of their way to help another Marine, new or retired. We live by the motto, "Once a Marine, always a Marine." 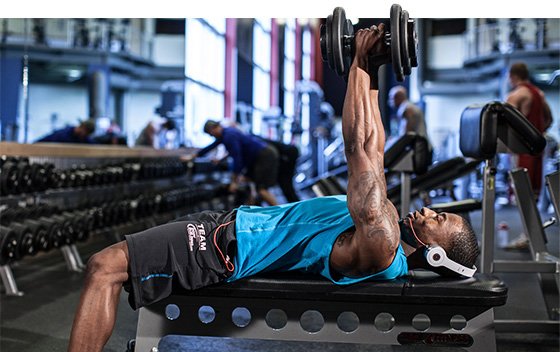 "If someone tells me I'm not going to be able to do something, that motivates me even more to try to do it anyway. Once I have a goal to reach for, I am going to do whatever I can to reach that goal."

You were a small guy when you enlisted. Did the other Marines mess with you for it?

Not really. I joined at 109 pounds. I remember when I checked into my first unit in the fleet, I was the new "boot" and it comes with a little extra attention, if you know what I mean. My roommates actually gave me the first kick in the rear end and got me in the gym. It's been a part of my life ever since.

You struggled with your return to civilian life. Why was it so hard? Do you still miss the Corps?

My biggest struggle was the transition and people not really understanding how difficult it was to transition to civilian life. A lot of my fellow Marines vets had succumbed to alcohol abuse, relationship problems, and depression. The gym kept me focused. I do miss the Corps a whole lot.