Dana Wolf is a professional feltmaker, specializing in custom fabric and clothes. The 48-year old has three stepchildren with Dave Wolf, her husband of four years. It sounds like she had an ideal life pretty much sewn up.

Yet Dana's life sped into unforeseen twists and turns that could've easily derailed her from becoming the 2011 MusclePharm Live Shredded Transformation Challenge winner.

As a college student in 1990, Dana woke up one morning with a paralyzed right arm caused by a severely pinched nerve. Doctors told her to accept that she would never regain full use of her arm - a diagnosis Dana would reject. Not knowing what to do, she joined a gym and worked out with no guidance; that is, until a trainer spotted her struggling and offered to help. Within months, she went from having no arm function to using her limb at full capacity.

Dana stayed fit into her early 30s, but as years passed, the toll of working three jobs kept her out of the gym. She didn't set foot in one for more than 10 years, until she began suffering from thyroid problems in 2006 after she met Dave.

Doctors told her it was one of the more severe cases they'd seen and that she would need medication to regulate her thyroid. Again, it was not good enough. In 2007, after marrying Dave, she went against the doctor's advice and opted for the lifestyle change that worked when she rehabilitated her arm - a trainer and a gym. 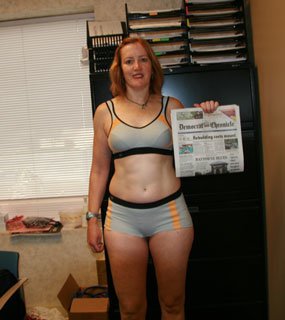 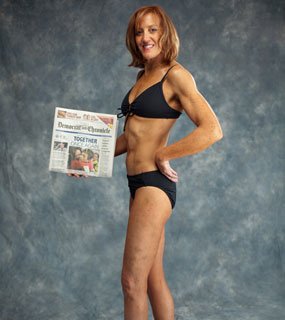 Read all about it: Dana won the transformation contest in fine style!

In two years working with the trainer, Dana went from nearly 170-to-150 pounds and dropped her body fat from 30-to-24 percent. Her thyroid responded well to the training, and it has functioned normally since.

In 2009, the upstate New Yorker's attempts to shed more pounds came to an abrupt end when she contracted Lyme Disease on a trip to Maine. Divorced from training, she also suffered from chronic bursitis in her arm, unhealthy cartilage in her knees and back pain from scoliosis.

Eventually, Dana decided enough was enough. In 2010, she paired with trainer Jim Valvano, a natural bodybuilding and power lifting champion.

When Dana heard about the MusclePharm Live Shredded Transformation Challenge, Jim insisted she could win. Jim was right. Dana was able to drop from 150-to-126 pounds; her body fat percentage fell from 24-to-15.

Dana hasn't competed in any bodybuilding or fitness shows, but did place second in an international fashion show earlier this year. She will use that experience to help with her training. Dana plans to remarry Dave in May thanks to her newfound confidence in a dress, and says she'll put her before picture next to her after to prove to everyone that things improve with age.

In Dana's Own Words

Congratulations on winning the 2011 MusclePharm Live Shredded Challenge! What inspired you to enter the challenge?

Frustration at not being able to lose weight and a belief that I could be better.

How surprised are you at the extent of your transformation?

Huge! My only goal was to lose 10 pounds. Not only did I transform my body, but I transformed my whole life.

You obviously stayed motivated throughout the contest. Any noteworthy or unique tips for our readers?

Inspiring other people is a real motivator, along with a happy trainer. I was never one to complete anything I started. I wanted to prove to myself that I could. 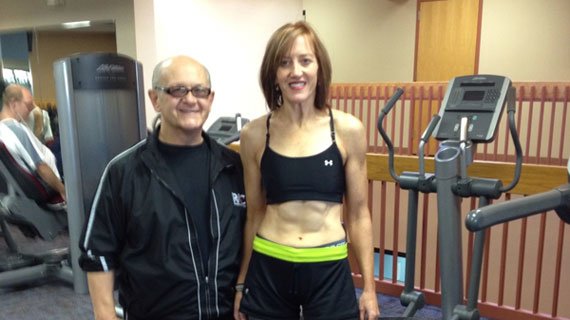 The master poses with his disciple, Dana. Teamwork is a beautiful thing, ain't it?

Were there any moments you wanted to give up? If so, how did you push through them and continue training?

The first month was the hardest. My body really fought the good nutrition and I craved my usual junk food. Once I adjusted to my new way of life, it was smooth sailing.

What was the single hardest aspect of your transformation?

Nutrition! I had a thing for sugar and fast food. It was easy and a quick fix. Detoxifying my body and finding a way to get food on the run was the hardest part.

Do you have any helpful tips for readers who might be struggling with the same issue?

I prepare my food the night before and have pre-measured amounts of turkey and chicken in ziplocks. If it's going to be a busy day, I just grab a bag and go.

I always keep packets of peanut butter and protein gel packs in my car and carry individual packets of Crystal Light to kick the soda habit. I order water and add Crystal Light - a nice trick that my trainer showed me.

A lot of people are going to read this and think, "Nah, I couldn't do this. Not me." Tell them why they're dead wrong.

I had several excuses down to a science (thyroid disease, menopause, Lyme disease, full-time job, kids, household chores). All reinforced by doctors and friends telling me to accept my weight because I'm older.

If you believe you can be better - you will be better! 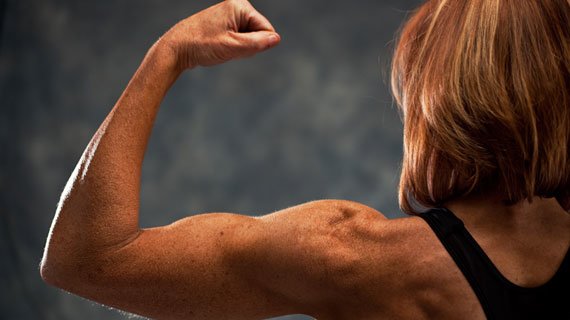 When these guns take aim, they shoot to thrill. Pow! Pow! Wow...

Now that you tackled this fitness goal, what's next? Want to get shredded like cheese, ripped like paper or climb Mount Olympus? Fight pirates? Build a fitness career, perhaps?

I still have unfinished business, but ripped like paper works for me. I hate leaving any stone unturned, so I'm open to any ideas that come my way. I've always wanted to take up Tae Kwon Do, but I was afraid to get beat up by a 4-year old.

I'm ready for the challenge now. Sporting clays is on my list next. I make custom fabric and clothes, so I might create some workout clothes that don't hurt. That may be my next project.