Many of the bodybuilding standards that we now use were first uttered by Jones and still survive the test of time.

Last time I discussed the first five major points in Arthur Jones' training articles. Indeed the first five principles that I gave you are already enough to get you started on a good routine. However with the information I'm going to present this time you should be able to formulate a program that is guaranteed to give you results.

Muscular endurance, as opposed to cardiovascular endurance, is directly correlated with the strength of the muscle. That is to say that if you can complete 12 reps with x pounds of resistance you should be able to predict, with some accuracy, the amount of weight that you could move for 3, 9, 20, etc.

For this reason training for muscular strength and endurance yield the same results; stronger, more powerful, larger muscles. Increases in muscular size make strength gains possible. The relation is not 1:1 however. Strength gains will continue, via neurological efficiency increases until no further such gain is possible. At this point size must increase in order to further more strength increases.

In order to accurately assess bodybuilding gains and maximize training efficiency, time must be considered in every training routine.

Arthur Jones also recommended assessment of distance for perfect measurement of power output. However, I believe that as long as the range of motion is kept consistent distance does not need to be ascertained. This is also a premise that Peter Sisco took in designing his training system.

Considering time as a factor can be a very simple task, or it can be the instrument of precision. At its very basic level it means recording the time, in minutes, that each entire workout takes. This works well for comparing whole workouts to one another. As long as the time period remains the same or less you are making reasonable progress, provided your poundage is increasing. If, on the other hand, the same workout begins to take you considerably longer than normal you are likely to have reached a plateau or have begun to regress.

Time keeping can also be applied to individual exercises. Jones' solution was to carefully control the time between the beginning of one set to the beginning of the next set. His recommendation was that there should be exactly 4 minutes between when you began one set to when you began the next set. Though I am not entirely sure where the 4 minute interval came into being it seems to be a reasonable time frame. Given that the average set time is 40-70 seconds that leaves approximately 3 minutes rest between sets.

Another control measure that Jones introduced was rep speed. He suggested a rep tempo of about a 4 second negative, and a 2 second positive. This further controls the total time involved in the workout and the time involved in completing each set and/or exercise. Another one of Jones' time control factors involved the timing of overall weekly training. He recommended that there be no more than five hours of training weekly and preferably 4 hours or less.

"For anything even approaching the best possible results from training, it is absolutely essential to work in direct opposition to your instincts." - Arthur Jones

This should seem obvious and yet in the gym every day you will see people wandering about with no idea of what exercise they are doing next or with what poundage. If you were to obey your instincts you would not lift weights at all. Basic instincts would involve conserving energy as much as possible, not to push yourself to the point of exhaustion for no life sustaining reason. Lets face the facts, training is a form of stress, something you body would instinctively avoid, not induce! 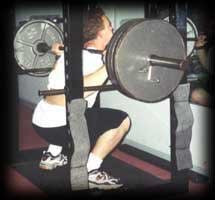 One, two, never more than three....sets that is. Jones was a firm believer that any more than three sets of an exercise was wasted effort and unnecessary. In general he stated the "best set scheme" was the 10, 8, 6 format. The first set of an exercise would use a sufficient amount of resistance to cause failure at 10 reps. The weight is increased on the second set to permit only 8 reps and again on the third set to allow for only 6 reps. Squats would be one of a few exceptions to this rule. In the case of squats Jones often prescribed the 20-rep breathing squat. An exercise that is still held in high esteem by the hard gainer camp. In addition to these recommendations he also did not recommend doing any more than two exercises per muscle group. In most cases, if results are not what are to be expected, a further reduction in volume is usually warranted. Upon a reduction in training volume most trainees will begin to progress rather rapidly and predictably.

For the best possible results a trainee needs to take some time off every once in awhile. However scheduled layoffs are not recommended because a trainees enthusiasm may begin to subside if anticipating a layoff. The opposite may also be true. A trainee who foresees a layoff may overwork in order to try to compensate for downtime, thereby negating the purpose of the layoff by overtraining severely before hand.

Long layoffs of anywhere from 1-4 weeks have proven beneficial in many cases. Often upon return, the trainee notices an increase in strength following the layoff. In any case if a month of training yields little results a layoff of 7-10 days is recommended.

As you can see from this short list Arthur Jones was a true innovator in the world of strength training. I do not espouse this to be anything even approaching a complete list of Jones' principles on training. I do believe that these are the ten most prominent points but someone else may read his work and pick out an entirely different set of principles. An article by Jones was often so in-depth that one could probably pick five or six principles from a single article. Now, as if that wasn't enough to get you going on your next routine, I'm going to finish by adding an Arthur Jones-type bodybuilding routine. Try this routine 2-3 times a week for the next 4-6 weeks and let me know what happens.

Do the following each session:

Just these eight exercises done twice weekly is all that is needed provided that you take each set to absolute failure. If the desired results are not achieved the volume/frequency can further be reduced by dividing the program into two sessions per week of only four exercises each. Now apply all of what you have learned in the last two articles and I'll see you in about 10-20 pounds!