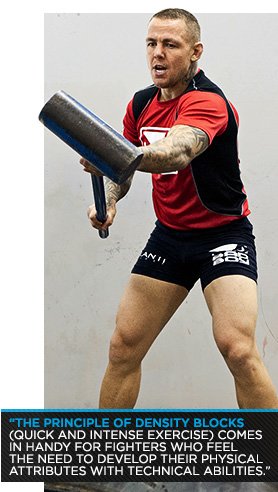 Density blocks are the bedrock of strength endurance training for fighters, especially those with less time on their hands. One of the biggest issues most combat sports athletes face is having to train multiple disciplines.

The mixed martial artist, for example, needs to hit all the ranges of his sport: boxing, Muay Thai, Brazilian Jiu-Jitsu, wrestling, and cage craft—all aside from irregular weight-loss and fat-burning runs, and regular strength and conditioning sessions.

The principle of density blocks (quick and intense exercise) comes in handy for fighters who feel the need to develop their physical attributes alongside their technical ability, after all, "skills pay the bills," as goes the mantra.

However, putting this all together can be subjective. I like to use a conditioning/strength movement such as tire flips and farmer's walks, followed by a push, pull and core movement, all finished off with a more severe conditioning movement such as sled pushes, bear crawls, and plate pushes.

The idea is you pick two antagonistic exercises such as bench press and chins and perform set repetitions for the 15-minute block or zone. The next zone you may go for front squats and RDLs. Either way, progress is measured by you trying to beat your PR, or personal record.

Here's an example of a density block routine I often use with the team of fighters at GrappleFit Towers. There are several ways to do this, depending on where you are in your program. The first way involves performing the required reps for a number of rounds. This is very straightforward and easy to check.

The second method is a favorite of mine but weirdly enough not so popular with the GrappleFitters. You set a timer for a number of minutes, then go all-out for as many rounds as you can in the designated time.

This is all kinds of fun, and provides a level of strength endurance second to none. 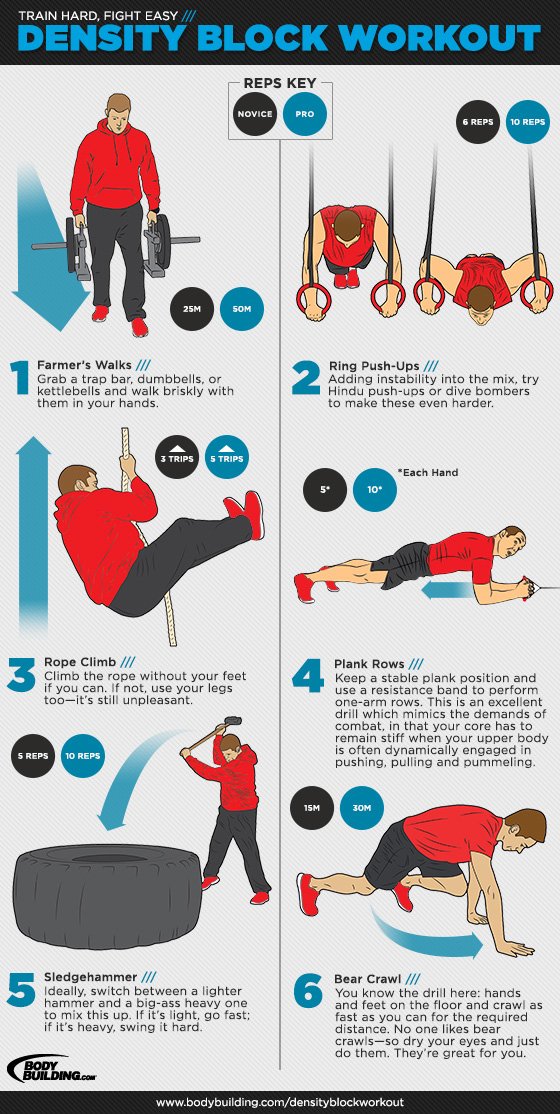 Another method you can employ is to pick one movement, such as clean and press, and go full out. The kit really doesn't matter—it could be kettlebells, barbells, dumbbells, sandbags, kegs, anything you can get your hands on, really.

Perform as many reps as you can in the time frame you choose. The Girevoy Sport events in kettlebell land are an example of this type of training.

Now, you can tweak the variables on this too. Let's say you perform 135 snatches in 10 minutes with a kettlebell. Then on your second workout, a week later, you need to be improving, so target 137 or 138 even. That's possibly the easiest way to do it. Perform more work in the given time frame every time, and smash your personal best.

Another way to do it would be to use less time. So drop off by 30 seconds—or even 60 seconds if you're feeling adventurous. This way you're still aiming to perform up to 140 snatches, using our above example, but you do so in less time. So you take less time to do more work.

Lots of time-efficient workouts can be had here and don't be afraid to experiment and break the rules a little. The only stipulation on this type of workout would be to pick movements that are compound and therefore multi-joint in nature. Things like curls and crunches would be a waste of time and possibly bring on ridiculous muscles soreness.

Well we all know now—or at least we should—that MMA is predominantly anaerobic in nature in terms of the energy systems in use. So anaerobic interval-type training is best for this intermittent style of combat. It is also noted that interval or anaerobic training can improve not only the anaerobic system, but also the aerobic system.

I've championed the cause for long enough that real fighters don't run. Here, I refer to long, slow distance running; sprints are cool and strongly recommended. 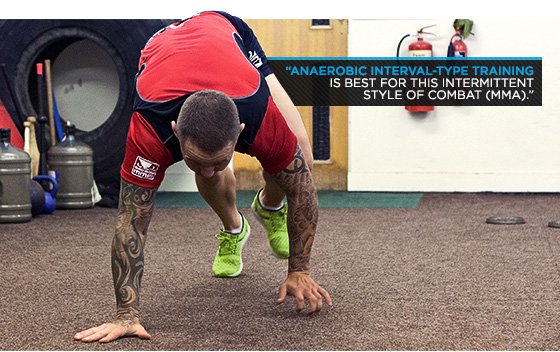 It's like a "buy one, get one free" offer. Hit anaerobic training and your aerobic system will be thanking you too. The other reason I like density training so much is that it's totally time efficient. I'm a busy father of three. It can be hard work juggling training and coaching with family life, as I'm sure many of you are all too aware. The point is that it's possible to still complete workouts in 20 minutes.

For the combat athlete this can be vital. As I alluded to earlier, time is a precious commodity for fighters who need to juggle a lot of skills training along with other things like family, work, diet, conditioning and, perhaps most important yet all too often overlooked, rest.

Density blocks offer a sweet trade-off between training hard and getting results, and not overtraining and spending too much time in the gym and not enough honing your craft. Start looking to add some density behind your training and I guarantee you'll see some incredible results.