Ask The Muscle Prof: The Truth About Overtraining

Overtraining is the bogeyman of the bodybuilding world. But is it really the menace it's cracked up to be? Our Muscle Prof, Dr. Jacob Wilson, looks at the research and explains how to safely increase your workload.

Q
I'm considering a program that would have me working legs three times each week. It seems like a great way to get more muscular, but will it put me at risk of overtraining?

Muscular hypertrophy, or muscle growth, is at the heart of the sport of bodybuilding. But it's not just for the mass monsters; the vast majority of people who start training want to build some muscle, even if they'd never dream of calling themselves a "bodybuilder." However, many fear that the high volume in hypertrophy-focused programs will inevitably put them on a slippery slope to "overtraining," a condition which will end up causing them to lose muscle.

So the real question is: What does it really take to push someone over the edge? The answer is, "Probably more than you think."

First, let's clarify that there is a difference between "overreaching" and "overtraining." Overreaching is a short-term decline in performance that can be recovered from in several days. Overtraining occurs when it takes weeks or months to recover. This is actually an extremely rare occurrence—as long as nutrition and supplementation are adequate.

Further, unlike overtraining, which is negative, overreaching can actually be beneficial in a well-structured training split. Let's take a look at the recent research and see how to make volume work for you. 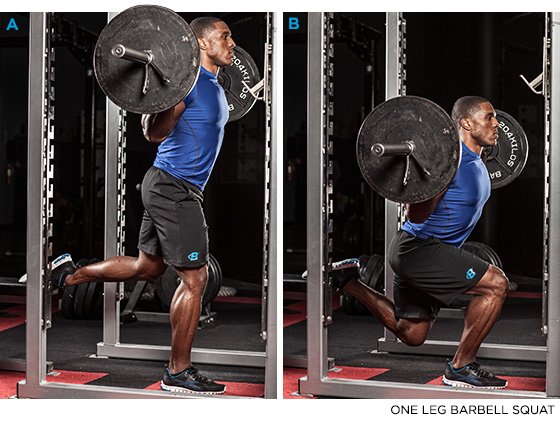 Frequency and Volume Are Not Your Enemies ///

The two most prominently discussed causes of overtraining are training frequency and volume.1 One of the old school myths of bodybuilding is that training any body part more than once or twice per week will result in "going catabolic." However, there's plenty of research that shows the opposite.

In one recent example, researchers in Norway took elite strength athletes who were training squats, deadlifts, and bench press three times per week and turned up the training frequency to six times per week.2 I'm sure many of your overtraining alarms are going off, but the researchers actually found that their subjects' strength and hypertrophy skyrocketed! This isn't totally unexpected. In fact, many elite athletes, such as the legendary Bulgarian national teams, have been training 3-4 times per day for decades.3

Frequency is important because training increases protein synthesis, but in well-trained athletes, this response lasts only 16-24 hours.4 Thus, if you blast each body part only once per week, you only really boost protein synthesis for a day afterward. If you have specific goals for, say, your arms, legs, or glutes, why would you stop there? Why not allow for growth three times per week or more?

The next issue is volume, which refers to the number of sets performed during training. There are two schools of thought about how volume affects hypertrophy. The first is that all the body really needs is one hard set, as long as it is performed to failure. The second calls for a higher-volume, multiple-set approach. Recently some researchers at the University of Sydney in Australia studied volume in a bodybuilding population with this debate in mind.5 They followed three groups who performed 3, 12, or 24 sets of squats per week. Their conclusion: the higher the number of sets, the greater the gains. 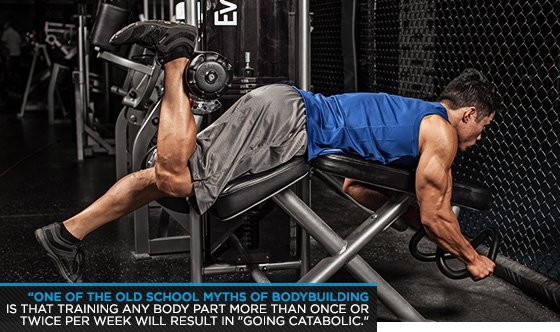 How to Safely Overreach ///

So how do you make this work for you? I recommend that you start by manipulating training frequency before volume. Let's say you presently train 18 sets for legs each Monday. You can start by increasing frequency to three 6-set workouts per week. This would result in greater overall protein synthesis.

Once you have adapted to training more frequently, each session can be increased in volume. For example, you might perform one high-volume 16-set workout, one heavy 6-set workout, and one moderate 12-set workout. Finally, when social and psychological stresses are low and it's easy to plan your life around training, incorporate a purposeful overreaching cycle.

To do this, you would combine high volume with inadequate rest, with the intent of "summating" your workouts collectively into one giant training stimulus. For example, if your legs are lagging, you might train them for five consecutive days. The following week, you would return to normal training frequencies but lower the number of sets by about 40 percent to allow your body to recover. This is known as a "taper" and usually lasts for 1-2 weeks.

It's important to understand that this should only be done with proper supplementation and protein intake. The lab where I work recently did a study where we had bodybuilders lift nearly 200,000 pounds in a week. When these athletes supplemented with anti-catabolic agents such as HMB, their gains skyrocketed after tapering. When not supplementing, they actually declined in strength and didn't fully recover following the taper. The takeaway is that high-frequency high-volume training is a tool that works best alongside proper nutrition, supplementation, and rest.