Amateur Bodybuilder Of The Week: Living In A Lifters Paradise!

Ben lives the amateur dream. He has ties to Cellucor, an up-and-coming fitness business, and enough inspiration and motivation to power it all!

I hadn't picked up a weight in two years and was attending community college with no plan. I spent my first two years of college trying to please everybody but myself. I didn't have many friends and my life was the definition of "going through the motions." At second semester, my friend Donovan from high school was in one of my classes. He was in the same boat; at home trying to save money and attending one of the most depressing colleges in the universe.

Donovan and I decided to start working out again. He had this "crazy" pre-workout called Cellucor C4 and told me to give it a try before we started our new lifting program. I took a couple scoops and had a killer workout. The feeling of being back in the weight room gave me sanity and I quickly fell back in love. 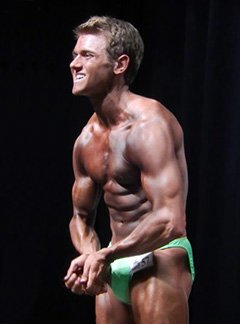 Around Christmas, Cellucor ran a holiday giveaway. I loved C4 and decided to win every contest Cellucor posted. For one of the contests, Cellucor wanted a remix of a holiday jingle with lyrics. I decided to remix Jingle Bells and make a music video. I put a box on my head, taped Cellucor lids on it, and made a fool of myself dancing in my bedroom.

Putting a box on my head and dancing to Jingle Bells might have been the most important part of my transformation. I was dubbed "Cellucor Man" and started talking to Dan Lourenco who ran social media for Cellucor. Dan and I became closer as time went on. He helped me with supplements, nutrition, training, and even relationships. He helped me through some pretty hard times in my life and quickly became my mentor.

After community college, I decided to tackle commercial real estate. The money seemed great and I had the opportunity to work with my dad. After a semester of that, I again found myself working to please everybody but myself. In late December 2012, Dan hooked me up with Hank Walshak. Hank runs the affiliate program at Cellucor. They signed me up and I started selling and representing Cellucor. This was surreal because roughly one year prior, I was dancing in my bedroom with a box on my head trying get some free stuff. Hank was a little harder to crack. He seemed nice, but I was a little intimidated by him. Whereas Dan was a friend, Hank was my boss. I figured if I worked hard, I would earn some respect.

In late December 2012, my gym friend, Ashley Hoffmann, approached me with the idea to compete. I asked her why I should compete, and she said, "Why not?" She was right. I got in contact with Tim Thompson and got the ball rolling on January 1, 2013.

Some friends and I started a private group on Facebook dubbed CutUpClub. This group was a place for us to post progress pictures, videos, and ask questions related to nutrition and training. The group grew rapidly and we decided to make an Instagram account to post fitness inspiration. Our following grew to just less than 2,000 quickly. People cared about and valued what we had to say. Our approach wasn't to intimidate people new to the industry. We wanted to be the first fitness group that supported everyone. As our following grew, I decided to turn CutUpClub into a business. I bought some screen printing equipment, started making shirts, and ran the business out of my bedroom.

I leaned out quickly and felt good about my physique. My friend Tyler and I decided to head to the Arnold Classic in Ohio on March 1. An 8-hour drive on a contest prep diet wasn't the best idea, but we did it anyway. We stayed with fellow CutUpClub members A.J. Smith and Dan Shaffer. I was nervous and super excited to finally meet Dan after more than a year of communicating.

We got to the expo and met Hank and Jen Jewell the first day. Jen is one of the nicest, most down-to-earth girls I've ever met. Hank showed my friends a good time and did an absolutely astonishing job running the Cellucor booth. On day two, I finally got to meet Dan. It was such a great feeling to meet the person who helped me through so much.

Things picked up with CutUpClub and I decided to quit my job at a local printing company to run CutUpClub full time. With the help from Hank and Cellucor, we ran promotions that grew the company. I was shopping for shoes when I got a text from Dan who wanted me to come to Vegas for a photo shoot with Cellucor the next morning. It was 3 p.m. and I had 20 tanks to make. So I started cutting water, trained legs, and started molesting rice cakes. I finished printing my last tank at 4:30 a.m., threw some clothes in a bag, got in the car, and headed to the airport.

When I got to Vegas, I was greeted by Dan, Craig, and the three amigos from LHGFX, Lee, Allen, and Harry. We gathered our things and headed to the gym. The amount of work that goes into a photo shoot blew me away. A 35-pound kettlebell doesn't seem heavy until you lift it 200 times and pause in the middle of each rep. After a day of shooting, Craig put us through a quick but intense fire and ice training session. 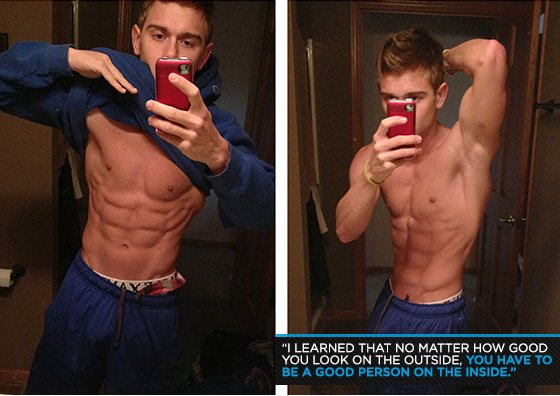 When I left Vegas and arrived home from the Cellucor photo shoot, I sat on my couch wondering what just happened. I will never forget what I learned on that trip. Everybody on that team earned everything. Most importantly, I learned that no matter how good you look on the outside, you have to be a good person on the inside.

We had to put my dog down the day after I got home from Vegas. I was sad, drained, and at the lowest carb state of my diet. I'll say it, I felt sorry for myself. It all hit me when I was on the treadmill for the second time that day doing cardio. I was so tired and simply didn't want to do it. At that moment, I developed my new life motto: "Somebody has it worse." My brother fought leukemia and almost died when he was five years old. My best friend, Elise, lost her mom a couple years ago. Soldiers come back from war with missing limbs and some don't come back at all. And here I was feeling sorry for myself. I will never forget that day, because it changed my life forever.

With only a couple weeks left until show time, I was excited. It was time to put the finishing touches on my diet and finish strong. With my new motivation, I felt better than ever. With friends like Tyler, Morgan, Brittany, Jake, Kendra, Johnna, Andrea, Connor, Regi, Daniel, Dave, Tom, Weber, Griebl, Lauren, Derek, Andy, John, Berger, Bud, Amanda, Katie, all the members of CutUpClub, and countless others checking in, I was determined to look my best.

I placed second in my weight class. If you know me, you know I hate losing. I'm the most competitive person I know and losing didn't sit well with me. I was initially frustrated when they called my number for second place. Then I heard my obnoxious friends and family cheering their hearts out. I had friends and family travel a long way to support me. Standing there on stage, my whole journey flashed through my head. Standing on stage in a little green man-thong in front of a thousand people, I couldn't help but smile.

I was pushed into it by my friend, Ashley Hoffmann, and quickly fell in love with the sport. I was always too short to do something. My first passion was basketball. I finally found something where being short wasn't only accepted, but better. I have strong willpower, dedication, and drive, so bodybuilding was a perfect fit.

When I started training to compete, I thought I wanted to do physique. It seemed easier and board shorts seemed better than trunks. My coach Tim Thompson and Ashley pushed me to bodybuilding. I had a good height and legs for bodybuilding. The more I thought about it, the more I wanted to be a bodybuilder. 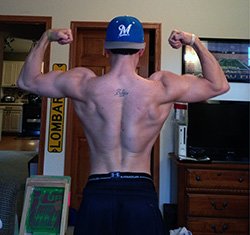 After placing second at my first show I qualified for nationals, but I'm not ready for a national stage yet. I want to spend this season growing. I'm going to work hard and try to move up a weight class and still do well. I also want to look into competing in the fitness category. I want to pursue fitness modeling as well.

Keep your head in the game. Bodybuilding takes a mental toll on just about everybody. Find things you enjoy outside of bodybuilding and do them. Don't leave your friends and family behind. Life is good; don't forget to enjoy it.

My favorite is Phil Heath. I love his training style and attitude. He's confident, but not over the top. On top of being a genetic freak, he works his ass off and I respect that.

I created a forum thread for my show prep about halfway through my prep. The support and advice I got through that thread was valuable. I didn't expect BodySpace members to be so positive. It helped me stay tight for the last couple weeks of my prep.