Twenty years ago, William Davis, MD, served on the faculty at Case Western Reserve University and performed morning-'til-night heart procedures. These were the "Wild West" days when angioplasty and related procedures made their way into hospitals, with surgical implements, drills, and ballooning devices serving as the six-shooters.

Much to his chagrin, he gained pounds—30, to be exact. His HDL (healthy cholesterol) fell to 27 mg/dl, his triglycerides soared to 350, and he became diabetic.

Since the biggest change he'd made (besides cutting fat) was bulking up his diet with "healthy whole grains," he slashed his grain intake to nothing. This dietary reversal normalized his numbers: HDL 72 mg/dl, triglycerides below 50 mg/dl, LDL in a safe range of 70 mg/dl (without drugs). He lost the 30 pounds from his abdomen, and his blood sugars fell back into the normal range. He was no longer diabetic. 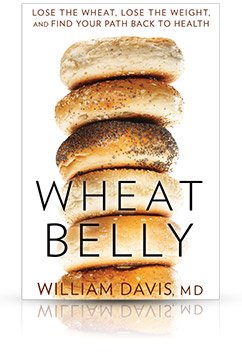 "Cutting wheat products in my diet, in particular, proved the dietary turning point that reduced my appetite, accelerated weight loss, and just helped me feel clearer, more energetic and happier than I'd felt in years," he says.

Dr. Davis then transferred this experience to his patients and witnessed similar results: weight loss, especially from the abdomen; reversal of abnormal cholesterol patterns without drugs; drops in blood pressure and blood sugar; and a host of other improvements in multiple abnormal health conditions.

Today, Dr. Davis practices cardiology in Milwaukee, Wisconsin. He implores patients to worry more about carbs than fat as part of a preventive lifestyle plan that also includes exercise and dietary supplements. He is the medical director of Track Your Plaque, an online heart disease prevention program. What's more, he has authored a riveting new book, Wheat Belly: Lose the Wheat, Lose the Weight, and Find Your Path Back to Health (Rodale Books, 2011), which goes against the grain in more ways than one. Bodybuilding.com spoke with the good doctor about the gut-busting result of America's love affair with a wheat-based diet.

Was wheat ever okay, or has it always been this villain you portray in the book?

Dr. William Davis: We have reports of celiac disease described as early as 100 A.D., so it's not entirely a new development that wheat is bad for human consumption. What's changed is that wheat's adverse affects on human health have been amplified many-fold. This all happened in the last 50 years. The version of "wheat" we consume today is a product of genetic research.

Could we turn back the clock to those forms of wheat that haven't been "Frankensteined" by food scientists?

One potential, partial solution might be to resurrect some of the older forms of wheat. If we go back 10,000 years, that would be Einkorn, a simple 14-chromosome wheat plant that still grows wild in parts of the Middle East. That stuff is far more benign than modern "wheat."

But on a practical level, you and I cannot, to any degree, obtain the forms of wheat that were grown 50 years ago, let alone 100, 1,000, or 10,000 years ago. And I'm not clear on how good of a compromise it would be to bring back some of those other forms, anyway. Even a modest amount of carbohydrate exposure is enough to raise blood sugar, induce physical fat accumulation, initiate inflammatory processes, and cause high blood pressure in genetically susceptible people. So I'm hesitant to say that "old" wheat is a perfect solution.

My solution is simply to eliminate it altogether from our diet. That's where I've seen incredible health benefits among the more than 2,000 at-risk patients I've placed on a wheat-free program. 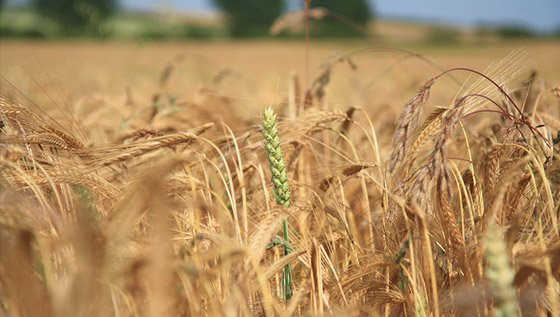 It's been shown repeatedly that wheat raises blood sugar extravagantly, higher than nearly all other foods.

In your book, you say that two slices of whole-grain wheat bread have a greater impact on blood sugar than a candy bar. How can that be true?

There have been thousands of studies chronicling the blood-sugar impact of different foods. It's been shown repeatedly that wheat raises blood sugar extravagantly, higher than nearly all other foods. That's not even a subject of controversy; it's an established fact, although it doesn't stop dietitians or agencies like the USDA from telling us to eat this stuff that raises our blood sugar higher than nearly all other foods.

It's incredible that we're told to eat foods worse than table sugar. And it's the reason why so many people with diabetes believe they're eating well because they cut their fat and don't eat candy or other food, but eat plenty of whole grains.

Are you wary of carbs in general or is wheat particularly harmful? 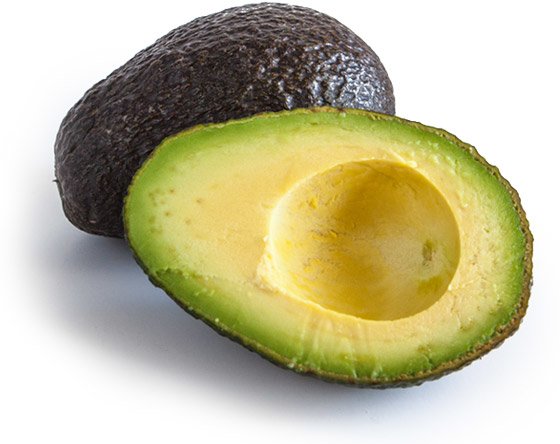 Many foods don't have wheat in them, including avocados.

I think wheat is the worst of the worst carbohydrates, not only because of the blood-sugar effect but also because it increases consumption. You take the wheat away from the average person's diet, and there's a natural reduction in appetite to the tune of 400 calories a day. That would happen if the only thing I asked you to do is to eliminate wheat. People think ditching wheat must entail deprivation and lack of choice, but there are thousands of foods that have no wheat in them, including plenty of vegetables, meats, cheese and eggs, avocados and olives.

We've lived through 40 years of a failed experiment, which was: Cut your fat and eat more healthy whole grains, alongside the explosion of processed foods. After 40 years of extreme carbohydrate consumption, we've burned out our pancreatic beta cells. We are no longer able to process carbohydrates. I think a lot of that is the legacy of the last 40 years. We're left with this end effect of extreme carbohydrate intolerance. We have to restrict other carbohydrates beyond wheat, but wheat still stands apart as the worst of the worst.

You're a cardiologist, so is there a connection between eating too much wheat and heart disease?

There's a very close connection—that's how I stumbled onto this. The most flagrant cause of heart disease that's rarely talked about is small LDL particles. I've watched small LDL particles explode over the last 15 years. It has become not just common but the dominant pattern we see now in virtually everybody. I'll see maybe a handful of people a year who don't have it, and they're all young, slender, pre-menopausal females who are marathon runners. Everybody else has at least moderate-to-severe degrees of LDL.

There are only two ways to get small particles, the flagrant kind that causes heart disease. One is genetically determined; the other is carbohydrates. I used a very simple line of reasoning. The foods that trigger the LDL pattern the worst, once removed, give you the most extravagant benefits. If wheat raises blood sugar and triggers small LDL particles higher than almost all other kinds of foods, let's see what happens when I took the wheat out of the diet of those with small LDL and high blood sugars.

Patients would come back with much lower fasting blood sugars and weight loss, but I'd also hear stories about how their asthma improved. Leg swelling decreased. Mood and depression improved. Other forms of arthritis and inflammatory diseases improved. Crohn's Disease improved. Acid reflux went away. At first, I thought: "This has to be a coincidence. Why would this have anything to do with eliminating wheat from your diet?"

But it became such an incredibly consistent pattern. I do this every day, and I heard patient after patient telling me very significant stories of success, how they were feeling better, looking better, more slender, ridding themselves of medications. It was clear that it was very specific to the wheat. That set me on this course. It all came from this effort to reduce blood sugar and small LDL.

Cut your fat and eat more healthy whole grains, alongside the explosion of processed foods.

Your book argues that the whole gluten-free craze in food marketing is, well, kind of a crock. Can you elaborate on why you think this?

People who eliminate wheat will often turn to gluten-free foods. In fact, most doctors who diagnose patients with celiac disease will say, "Go eat gluten-free foods." What they're telling their patients to do is seek out foods that are not made with wheat gluten but are instead made with corn starch, potato starch, rice starch, brown rice starch or tapioca starch. Well, the only foods that raise blood sugar more than whole wheat are corn starch, rice starch, potato starch, and tapioca starch. These are flagrant, rapidly digested carbohydrates when they're in the powdered form as presented in gluten-free foods.

It's not uncommon for someone to go on a gluten-free diet and find that their diarrhea and cramps are now gone. Only now, they're diabetic and fat. While those foods don't trigger the immune phenomena, they trigger the carbohydrate phenomena worse than table sugar. So "gluten-free, multigrain bread" sounds for all the world like a great thing. Well, it's terrible for you.

We have a lot of young male bodybuilders visit our site. Why should they be interested in a book like Wheat Belly?

If they're trying to cut body fat, this will help them understand that the Number one step is to eliminate wheat, even before sugars. In fact, given the choice of two slices of whole-wheat bread or a Milky Way bar, I'd take the Milky Way bar. I'd rather they choose neither, but the wheat is worse. That's not what we're being told, of course. Wheat is the most flagrant trigger of visceral fat, and removing wheat is the most effective path to remove [visceral fat]. Any guy trying to get cut for a competition will find that eliminating wheat and reducing carbohydrates are the most effective ways to cut fat. 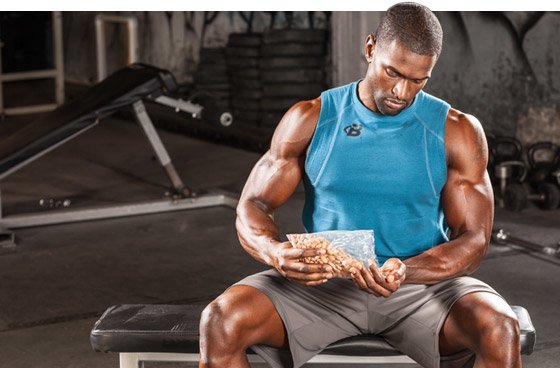 If they're trying to cut body fat, this will help them understand that the No. 1 step is to eliminate wheat, even before sugars.

So a wheat belly ain't a 6-pack, is what you're saying? Since you are a cardiologist, can you offer some heart-health tips for guys ages 20 to 35—tips that might pay them dividends when they're 40 or 50?

Everyone is focused on reducing total cholesterol, which is the wrong way to think about preventing heart disease. What matters the most is following strategies that reduce the expression of the small LDL particle. We can't do anything about the genetically programmed part of it, but we can do a whole bunch about the carbohydrate-triggered form of LDL. So I would suggest that cutting out wheat and reducing carbohydrates is a huge first step in cutting heart-disease risk.

Another very important thing is normalizing blood levels of vitamin D. What I do is use gel cap forms to try to achieve a 25-hydroxy vitamin D blood level of between 50-70 nanograms per milliliter. Do that, and muscle performance improves, coordination improves, mental clarity improves, mood improves, and winter blues go away.

The Russians have known about this for decades. They noticed the inconsistent performance in their weightlifters and their powerlifters. How could they lift heavier in the warm weather? Well, exposure to sunlight increases our ability to produce vitamin D. So they've been supplementing vitamin D year-round to their powerlifters for decades. That's advice your crowd can use, including people who use weight training, strength training, and bodybuilding. Vitamin D is hugely crucial for their success.