What Ingredients Are In High-Quality Pre-Workouts?

This snippet is part of our series: What Are Pre-Workout Supplements And How Do They Work?

The label on some pre-workouts looks simple enough. In other cases, it's a laundry list of difficult-to-pronounce words and secretive-sounding "blends" or "matrixes." Plus, with so many different brands and products, it can be hard to know what makes one better than the other.

Especially if you're just starting out, it's usually better to keep it simple. Here are four key ingredients to look for, and how they help you have a better workout:

Many lifters and other athletes consider caffeine their best training partner, and for good reason. "Study after study has shown that caffeine can increase alertness, sharpen focus, improve tolerance for pain caused by exercise, help burn fat, and help athletes do more work for longer periods in the gym and in sport," writes Robert Wildman, Ph.D., RD, RISSN, in the article "Boost Your Workout With Caffeine."

Caffeine gives you quick energy you can use for both endurance exercise and shorter duration, high-intensity work such as lifting or sprints. It has been shown to increase maximal strength, power, endurance, and even reduce muscle soreness[1].

Sound effective? It definitely is. "In fact, caffeine works so well that, up until 2004, its use was banned by the World Anti-Doping Agency," says Wildman.

Fortunately, the ban ended, and since then, he notes, "More than 75 percent of elite athletes routinely use caffeine during competition." And the rest of us do, too—upward of 80 percent of Americans use caffeine daily!

Some people are caffeine-sensitive no matter what the dose is, while others seem oblivious to the physiological effects of it. Research has also shown that you can build a tolerance to caffeine, though this tolerance will not interfere with the physical performance-boosting benefits of caffeine[2,3]. Some individuals perceive that they have built up a tolerance to the product they are using, and simply change pre-workouts every few months to see if just the “change of scenery” helps.

Provided you are consuming adequate calories and protein, the branched-chain amino acids of leucine, isoleucine, and valine help you by regulating protein metabolism, which means increasing protein synthesis and decreasing protein breakdown. In other words, BCAAs help you build muscle and minimize muscle damage. Taken pre-workout, they can also help decrease delayed onset muscle soreness (DOMS) so you can get back to training hard faster, and they reduce mental and physical fatigue during a workout.[4]

The most popular and science-backed ratio for BCAAs is 2:1:1—two parts leucine to one part isoleucine and one part valine. You want more leucine because research has shown that it's the best amino at stimulating muscle protein synthesis. If the brand you're interested in doesn't list a ratio, look for at least 3 grams of leucine per serving.

All of the benefits of BCAAs can also be obtained by taking essential amino acid blends, or EAAs, which are increasingly popular in pre-workouts and standalone amino blends. After all, BCAAs are part of the EAAs. The EAAs include the three BCAAs, as well as six other amino acids that your body can't produce on its own. This is why exercise physiologist Nick Coker includes EAAs in his article "The Top 3 Supplements for Gaining Mass."

Beta-alanine is a staple pre-workout ingredient with a singular purpose: helping you withstand that "burning" feeling and bust out a few more reps, making the most of every set.

When you perform high-intensity exercises, acidity can start to build up in your body, increasing muscle fatigue and reducing performance. Beta-alanine binds with histidine to raise levels of the amino acid carnosine, which buffers the hydrogen ions that form these acids, ultimately helping you maintain your intensity for longer periods of time. In other words: more volume; more gains.[5] In the article "Your Expert Guide to Beta-Alanine," supplement specialist Chris Lockwood, Ph.D., CSCS, calls it "Probably the most consistently effective performance-enhancing supplement to hit the sports nutrition market since creatine," and says "beta-alanine is an ingredient I strongly recommend athletes keep in their arsenal."

If you take a larger dose of beta-alanine, as is in many pre-workouts, you will most likely experience a tingling sensation, often on the neck and face. This is a condition called "paresthesia," and the first time someone takes a pre-workout, they often notice it as much as the caffeine. Scientists are not certain why some people experience paresthesia after taking beta-alanine, but it is harmless and temporary.

However, beta-alanine's benefits come with a catch: It needs to be taken consistently for 2-3 weeks before the results start to appear. Luckily, you don't need to take beta-alanine right before a workout, though. If you take it in smaller doses throughout the day, it will provide the workout benefits with less tingling. The International Society of Sports Nutrition recommends a dose of 4-6 grams of beta-alanine per day, split up as necessary.[6]

These are the pre-workout ingredients that boost blood flow to muscles, and help you get a serious pump during high-rep lifting.

Once upon a time, l-arginine was the most popular NO booster, but on its own, it is fairly rare these days. Today, there many different ingredients that may help with NO production, but the most popular is probably the non-essential amino acid citrulline, either in the form of L-citrulline or citrulline malate.

L-citrulline is the natural form of citrulline, found in watermelon. It helps boost nitric-oxide levels, which can help dilate your blood vessels to get more oxygen and nutrients to your muscles. As nutritional consultant Mike Roussell, Ph.D., notes in the article "Citrulline Malate: The Fatigue Fighter," it also plays a role in the removal of ammonia, a compound known to cause exercise-related fatigue, from your blood.

Citrulline malate is L-citrulline to which malic acid, or "malate," has been added. Aside from the boosted blood flow that comes from the citrulline, "Malate is also thought to have fatigue-fighting capabilities of its own, by supporting the body's own ability to recycle exercise-generated lactic acid and use it for energy," notes Roussell. This one-two combo can mean improved endurance during a workout—i.e., more reps before failure—and even a decrease in muscle soreness.[7]

It seems like every day, a new pre-workout comes out with big potential and a science-backed dosage of ingredients. A few of the most popular include:

What about creatine? Many pre-workouts contain it, and there's no downside to taking it before your workout. However, it's not demonstrably better at this time than any other. More important than when you take creatine is simply that you take it consistently. In the article "5 Reasons Your Creatine May Not Be Working," Krissy Kendall, Ph.D., writes, "If you rely on your pre-workout to deliver your daily dose of creatine, you'll likely come up short." Instead, she recommends taking 3-5 grams daily of this inexpensive performance booster on top of whatever is in your pre-workout.

This is by no means an exhaustive list! If you see something new that you don't recognize on a pre-workout, do your research to make sure it's something you want to take. And only buy pre-workouts from established companies that engage in third-party testing and don't make outlandish-sounding claims.

BACK TO SERIES
What Are Pre-Workout Supplements And How Do They Work? 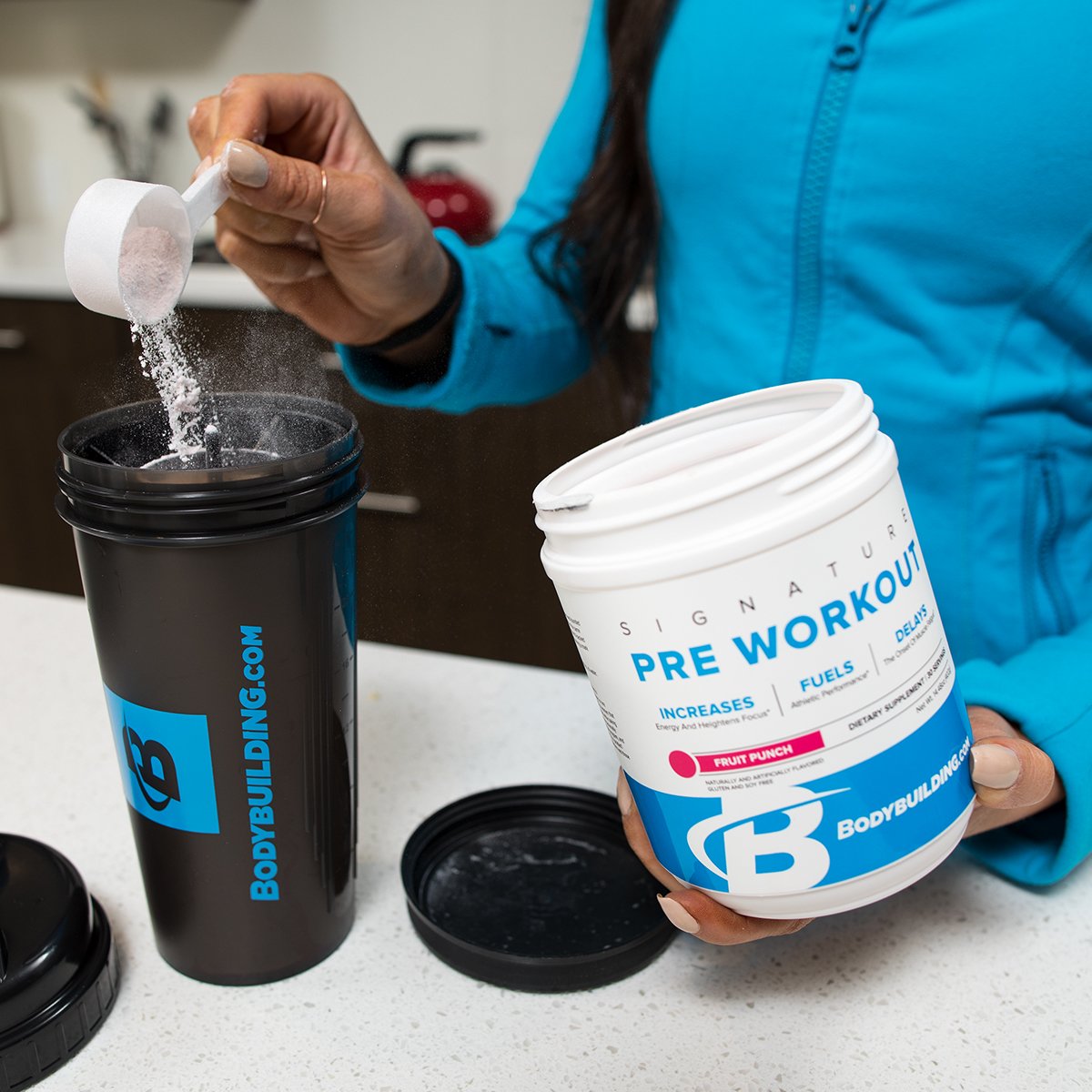 NEXT ARTICLE
When Should I Take A Pre-Workout?