The road is slowly winding down to the 2005 New England Bodybuilding and Fitness Competition with only 6 weeks to go. Continue following Justin's program with just 6 weeks remaining.

The road is slowly winding down to the 2005 New England Bodybuilding and Fitness Competition with only 6 weeks to go. Justin is more focused than ever in his contest preparation, and has already surpassed his size and condition at last years contest with 6 weeks to go!

Everything is steadily moving along in Justin's preparation and these last six weeks will be focused on dialing him in for the show date. This year's competition in the light-heavyweight class will be a dog fight for sure, but I am confident that Justin will be up there posing with the best of the pack!

Body Fat: As you can see in the recent 6 weeks out photos, Justin has improved dramatically in his overall conditioning; he is tighter, harder, more vascular, and more striated than he has ever been.

As I stated in the first journal entry we do not do weekly body fat measurements to track progress. Instead we take many weekly photo's to asses the specific areas that need to improve on, and also look at the overall improvements with his condition to see the changes Justin must make in his diet, training, and cardio for the upcoming weeks.

Justin's diet up to this point has been basically the same as it was from 10 weeks out. Now that it is 6 weeks out we are beginning to implement a carbohydrate cycling protocol in order to tighten up the places on Justin (mainly his lower back, legs, and glutes) where he still needs work.

We are also using this time to practice a carbohydrate loading plan on the weekends to find out what will work optimally for the show day. What we have been doing is using a "shit load" on Saturday morning after he has been going fairly low carbs towards the end of the week. On Saturday he will load on junk food for his first two meals of the day, and then go back to his normal diet for the rest of the day.

It is pretty amazing how you can actually see him filling out after he eats his first meal, and he is pumped and vascular about an hour or so after the meal. This carbohydrate loading idea sounds crazy, but if it is done right, it works like a charm.

Justin's carbohydrate cycle for the week looks somewhat like this:

Throughout the week Justin's protein remains high, around 300g-350g every day except on Saturday when it gets reduced a bit due to the high amount of carbohydrates.

So far this method has been working extremely well, and there have been very noticeable improvements from 6 weeks out to 5 weeks out after implementing this method. The food sources still remain the same in this phase of the diet except Justin's red meat intake gets reduced to only 1 day a week.

He also starts supplementing more with omega 3, 6, and 9 fatty acids on his low carbohydrate days.

Justin's cardiovascular work has been staying at 1 short 15-20min. session per week on the Precor. This cardio session is primarily used to work his glutes and hamstrings.

Cardio will probably get increased to 2 sessions a week at 4 weeks out, and then possibly cut out completely the last two weeks before the show depending on how Justin's lower body looks.

Now, onto the training journal...

Today's training consisted of legs (quads, hamstrings, calves). This means that his carbohydrate intake was pretty high, along with a moderate protein intake, and a low fat intake. So his diet for today looked like this:

You can refer to the section above detailing his carbohydrate-cycling strategy for this week of his diet. His meals are still split up evenly over the day with a high amount of carbohydrates coming from his morning meal, and his post workout meal.

His protein and fat intake is split evenly over the course of his six daily meals.

* When it says 12 plates that is the total amount of 45lbs plates on the machine. 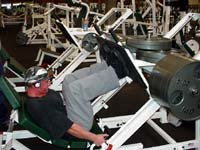 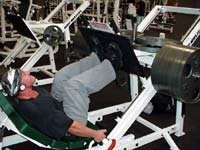 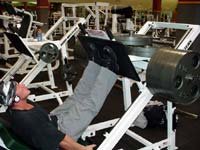 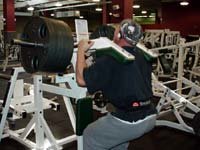 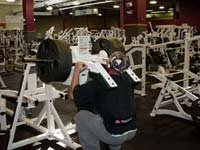 This was a very effective leg workout, and Justin's legs looked awesome (as you can see from the pictures) for 6 weeks out. These pictures are from a new gym, Work Out Plus, which had some very nice equipment, and a nice overall atmosphere for a positive workout.

I am very pleased at how Justin is coming along in his preparation.

You can refer to the diet section in the 10 weeks out journal to see how this breaks down over the course of Justin's 6 daily meals. This is just the macronutrient breakdown for this particular day.

Today's training consisted of Chest and Triceps. For today his carbohydrate intake remained the same as yesterday, with a high protein intake, and a moderate fat intake. Today his diet is essentially the same as yesterday now that he is following his new diet plan for 6 weeks out. 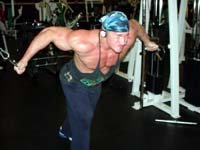 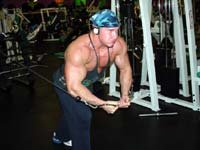 Today's workout consisted of chest with triceps. Today's workout went very well and Justin is still maintaining his strength for this point in his prep. This week we will be paring triceps with chest and biceps with shoulders so that we can take an extra day of rest this weekend.

I feel that this will help Justin recover better, and at this point in his prep he does not have to do extensive workouts for his biceps and triceps.

Today's training consisted of back and calves. The diet for today was the same as it was yesterday. 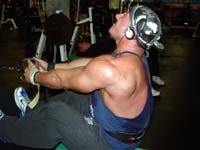 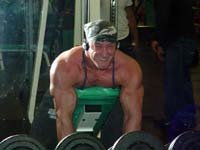 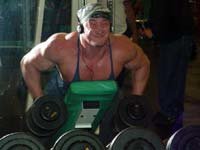 This was an awesome workout for back, and Justin was able to maintain his energy throughout the whole workout. He is looking noticeably tighter and harder compared to the beginning of this week.

Today's training consisted of traps, shoulders, and biceps. Justin's carbohydrates were slightly reduced today in comparison to the previous day's diet. The carbohydrate intake will come down slightly over these next two days in order to deplete for Saturday's carbohydrate load.

You can refer to the diet section in the 10 weeks out journal to see how this breaks down over the course of Justin's 6 daily meals. 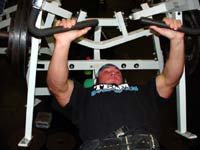 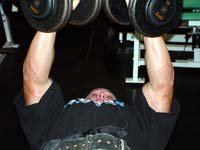 * This is the total number of reps for both arms combined.

Today's workout was pretty long, and Justin was dragging towards the end of it, but still put forth 100% effort. In order for Justin to be his best at the New England's he knows that he is going to have to suffer, and he is prepared to do what needs to be done to be successful at the show.

Today's diet was the same as yesterday's diet. Justin's carbohydrate intake remained low today due to the fact that it was an off day from training and cardio, and also because he would be carbohydrate loading tomorrow.

- Workout - Off Day (training and cardio)-

This morning Justin had a huge breakfast consisting of a variety of tasty breakfast foods. His calories were not recorded today because it is difficult to keep track of the amount of calories and macronutrients that are coming from junk food.

After this meal Justin was looking very full, pumped, and vascular all over. The posing pictures from this week were taken after this junk food meal, and you can see for yourself the improvements he has made in his physique over the past few weeks.

Justin then followed this meal up with another meal consisting of clean food mixed with some junk food. After this Justin resumed his normal diet for the rest of the day. Like I mentioned before, most people may think this idea is crazy, but if you have a fast metabolism it works like a charm!

Workout - Off Day (training and cardio)

With the new changes that were implemented in Justin's diet this week he has noticeably improved since last week. Until then, if there are any questions or comments about Justin's preparation please feel free to e-mail me at Kas1n0l3i30y@aol.com.