Members of the Bodybuilding.com forum were nice enough to share embarrassing gym moments they experienced - From undies on the hood to a spotter walking off for a moment. You will surely get a laugh right here!

Let's face it, we all do stupid things every once in a while at the gym which gets us some unusual stares and laughs. Whether you are just starting out or an experienced lifter, you will at least once in your lifetime do something that you look back on and will laugh.

Members of the Bodybuilding.com forum were nice enough to share some of those embarrassing, yet funny moments. Sit back and laugh (or sit there in silence if it happened to you in the past). Either way, ENJOY!

"When I first started squatting some jack@ss left the bar loaded with 3 plates a side in the squat rack. My little @ss precedes to unload all three off one side and the other side goes crashing to the ground. There was no way to play this one off." 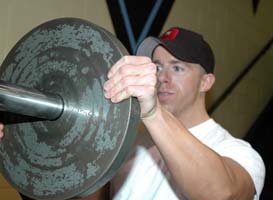 Click Image To Enlarge.
Don't Unload One Side At A Time.

"Loaded up the bar with 205 on incline press, got to the 6th rep and couldn't get it, my workout partner went to get a drink of water - the bastard - so it slammed down on my chest and then slammed down on my thighs, HURT LIKE HELL then I rolled it down my thighs and it slammed on the ground, yes I looked like a moron and yes everyone saw me at peak hours, I wanted to kill my workout partner because I couldn't walk the next day without being in extreme pain."

I smack myself in the face, the weights fall, loud noise happens (boom), everyone in the gym looks at my in time to see me dizzy from punching my self in the forehead." 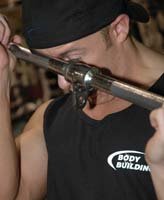 "Just the other day, I was doing military press. It was the first time in a while so my form was a little shaky. I was on the last rep of my second set, when for some reason, I lost my focus. Without thinking, I pushed the bar up, and smashed it right into the bottom of my chin. I bit my tongue and was bleeding everywhere. I spent 10 minutes in the locker room trying to stop the bleeding.

And of course, I have done the infamous "Drop the bar on your chest because you were doing a weight you couldn't handle" thing, too." 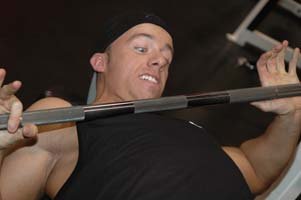 "Some guy asked me for the fifty pound dumbbells I was using and when I was giving them to him I dropped it on his foot that was basically bare (sandals) it was his fault though, but it was soooo funny."

"3 weeks ago I was squatting and this guy comes to get a weight on my squat rack and hits his shoulder into my barbell. I fall backwards onto my @ss but wisely totally let go of the barbell so I wouldn't screw up my arms being bent back. it made a loud noise and the whole gym stared."

"When I was young and inexperienced, I had a barbell racked on the bench and I took all the weights off one side. Naturally, because of gravity and balance and all that, the bar shifted, and the weightless end came straight up into my chin. In addition to that, because my bench is at home in our junk room, the bar and weights flopped around and smashed several things." 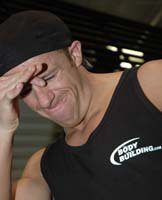 "I've fallen off the treadmill more than once..."

"I was running so fast and my shoelace came untied--I looked down and WOOPS---went flying off!!" 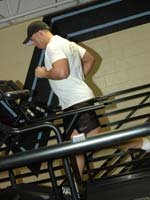 "I ripped one on the smith machine doing squats when my boyfriend and his friend were standing a few feet away having a conversation. Needless to say their conversation turned into hysterical laughing. I was so embarrassed that I got teary eyed."

"I once almost killed myself at the gym.

Someone had left a barbell laying in the middle of the floor and being the klutzy girl I am, stumbled over it. I stumbled right in to the Smith Machine. The bar to be exact. I remember a thunk sound which was the bar making contact with my forehead.

The next thing I knew I was staring up at a group of people surrounding me. I had knocked myself out. I was fine, a little bruised, a lot humiliated, but otherwise fine (eh, a little disoriented)."

"I once saw this guy being taken out of the gym on a stretcher by paramedics, because he dropped a stacked bar on his head during chest presses. That was NOT a pretty sight."

"I joined a new gym, and after a hard workout, decided to spend a few minutes in the sauna drying off while I gathered the energy to cycle home. So I showered, and walked into the sauna, holding my very small towel in my hand. And found the sauna was already occupied by three men wearing swimsuits.

No-one told me it was a mixed (and clothed) sauna. The worst thing was that I was coming in from the light to the dark, so I couldn't see their faces, but they could see every little (and not so little) bit of me. To this day, I don't know who saw me naked."

"A little while back I was getting in position to do dumbbell pullovers... the weight was kinda heavy and I am not, so when I positioned myself on the bench (of course I did not anchor my feet) and let the weight fall back for the stretch - down went the dumbbell and up and over went my feet and I basically flipped backwards over the bench. "

"About 6 years ago I was doing back extensions on the old school Roman chair. I had lost quite a bit of weight and had no more boobs so I was faking with the silicone "cookies" in my sports bra. As I flexed forward out poured a fake booby on the floor." 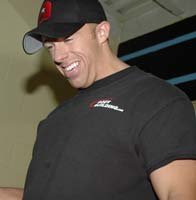 Click Image To Enlarge.
Do You See What I See?

"I was standing in front of the mirrors in the locker room pulling my hair back and this woman walked in who looked about seven months pregnant, she also looked lost. She smiled at me and I smiled back and she asked me how I liked working out there and said she was checking out the gym, thinking of joining.

I told her it was great - a really great atmosphere. She said, "Well, I won't be joining for a few more months, yet, anyway... but maybe I'll see you around when I do?" I'm a friendly girl so I said, "Sure! So how much longer do you have to go?" I nodded at her stomach.
"Excuse me?"
"Until you have the baby?"
"Uhhhh, I'm not pregnant..." she said.

I felt like the biggest jerk in the whole world. She then went on after an awkward silence to say that was why she was joining the gym in the first place. I apologized profusely and told her I'd do anything I could to help her out if she needed it. She ended up mumbling, "Thanks" and walking out.

She did join the gym and I had to see her ALL the time and she never, ever said a word to me again and went out of her way to avoid me."

"I was getting ready for a competition so every cardio session I did I would wear a hoodie. So after I lifted I went and grabbed a hoodie from my locker. Well apparently after doing laundry a pair of my undies got stuck to my hoodie. I had no idea... I walked over to the efx and I started doing my cardio, about 10 minutes into it I notice undies right by my machine.

After a second I realize they are mine!!! Well my gym is packed and there was no way I was going to pick them up or even pretend I saw them. So for 35 minutes I watched about 10 trainers walk by with clients and kinda look at them and wonder. I wanted to die!! Still to this day I have no idea how many people saw me walk through the gym with undies stuck to my hoodie and pretend they weren't mine!!"

"I was doing ball crunches with my trainer on the regular gym floor (not hidden away in the PT area) and he'd just put me through a rigorous session, and my abs were dying. So I leaned far back on the ball to stretch out the cramp and misjudged my balance -- I flipped completely over on my head, legs flailing on top of the ball until it rolled out from under me. My trainer was laughing so hard everybody else had to turn and look." 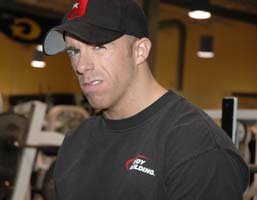 "I dropped 120lb DB's on a guy's foot after telling him to back up... well it wasn't embarrassing for me but it was for him... even more when the gym owner called the guy an idiot."

"My friend tried to skull crush with the same weight I was using. On his second rep, he was bringin' the bar down real slow and it just slips out of his hands and hits him on the forehead... BAM, he was out cold. I couldn't stop laughing!"