The Right Way To Make A Resistance-Band Workout

You may think you're limited to just a few straightforward moves when you train with resistance bands. You're wrong! Here are 26 moves you can do, along with two workouts to keep in your back pocket!

It's late at night, and you're in a town where you don't know anything or anyone. But you know what you want to do: lift! Fortunately, the hotel you're at has a gym—or, at least, the website said it did. But when you enter the dimly lit former storeroom, you find out there's nothing but a few ancient treadmills and a recumbent bike. Well, that's the end of that.

But it doesn't have to be! This is just the situation that resistance bands were created for. So why didn't you bring one? Perhaps because you were convinced that no band is up to the task of giving you a challenging, satisfying strength workout. But trust me, it is. You just need to know how to use it.

Most things you do with a dumbbell or barbell can be done with a band. Will a band deadlift give you exactly the same strength stimulus as a loaded barbell on the platform? Of course not. But that's not necessarily a downside. In fact, I would argue that the main benefit of bands is the way they provide a different stimulus to your muscles throughout your range of motion.

As you can see in this video, I'm a fan of exercises that don't demand you wrap your band around anything other than your feet or your torso. But of course, if you have a patio with a railing, you have an excellent spot for rows and flyes with your resistance bands. Along with some dips on chairs or a desk, and incline or decline push-ups from any raised surface, you've got everything you need to make a difficult full-body workout.

Just don't be surprised if you want to keep a few of these band moves in your program after you go back to the world of iron. Here are my favorite band movements:

26 Fat Burning Exercises with a Resistance Band
Watch the video - 2:45


How to Make A Band Workout Tough

If you only know the types of bands that have two cheap handles at the end, then switching to the loop variety, like I use in the video, will open up a new world of difficulty. But if you feel the band you have still isn't quite as resistant as you need it to be, here are several intensity techniques you can employ to make sure you're challenging yourself.

Rather than performing your traditional 3 sets of 10, perform uncounted repetitions in a specific time frame. I recommend starting out at 30 seconds per set, performing controlled movements continuously, and working your way up to 60 seconds or more.

Adding a pause at specific places during your repetition can yield a new stimulus that challenges the mind and body. Consider pausing just after transitioning into the positive (concentric) portion of the repetition, such as a few inches after you begin pressing upward in a banded shoulder press. Or, pause right at the sticking point, such as at the bottom of your squat. 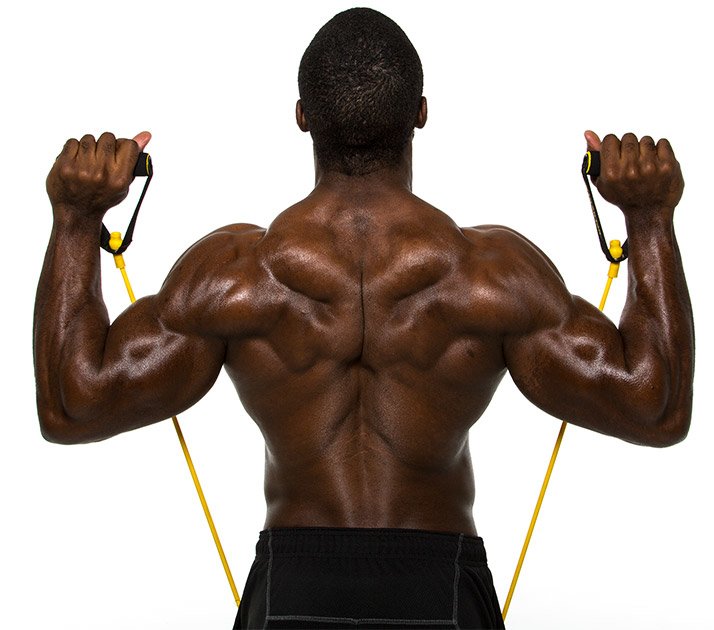 Adding a small "pulse" to the bottom of the movement makes it surprisingly hard. For example, when completing a push-up, only come halfway up on your first rep, then lower yourself to the bottom position before finally pushing upward through a full range of motion. That's all one rep. These are also great for lower-body moves like squats and deadlift variations.

Rather than letting the band pull your arm, leg, or body back into the bottom position of a rep, focus on slowly controlling the eccentric portion of the movement instead. This will increase the intensity.

Joey Percia is a competitive 181-pound powerlifter. He has a master's degree in exercise science, and is a CPPS coach, Westside Barbell Coach, and CSCS.