Proper depth is an essential part of the squat, but many of us aren't able to reach it—yet! If you're struggling to get below parallel, here's why you should fix it, and how!

The back squat is one of those curious movements that looks far simpler than it is. Put a bar on your back, bend your knees, and stand up—elementary, right? Not even close. In the time between the walk-out and racking the weight, it's easy for things to go wrong.

In my mind, the biggest back squat faux pas occurs when the person doing them doesn't squat low enough. I'm not necessarily talking about "ass to grass" squats—although I think they're sexy as hell—just squatting low enough for your hip crease to go below the top of your knee cap.

But here's the thing about depth: getting down that low can be impossible if you're not performing the movement correctly. Is this a reason not to squat at all? Definitely not: It just means changing your priorities from squatting heavier to squatting better! In his popular book "Starting Strength," Mark Rippetoe says that anyone can do a below-parallel squat if they simply squat correctly.

Let's explore some of the reasons you may not be squatting to depth and how to correct them.

Problem 1 You're Going Too Heavy

Solution Dial Back The Weight

It sounds counterintuitive to anyone who has ever struggled to squat low, but a below-parallel squat can actually produce more force than a partial one. The lower you can squat, the more rebound (stretch reflex) you can get out of your muscles. The harder your muscles can contract after a stretch, the more you can lift. 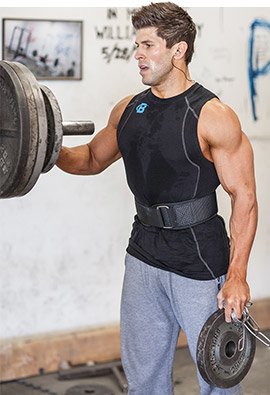 Rule number one when you're learning how to squat to depth: Take some weight off the bar.

If you're used to throwing 315 pounds on the bar and quaking while you bend your knees 30 degrees or so, trying to get your hips to go below your knees might feel impossible. That's because you've been relying on your quadriceps to do a lot of the work while you leave your hamstrings, glutes, lower back, and adductors hanging out to swill beer. It's possible you'll be able to squat 315 once you've harnessed those weapons, but it will require you to rethink what a squat is.

The squat has a weird reputation for being a quads exercise. For bodybuilders trying to find the best ways to isolate each muscle group and then destroy it, using squats to hit their quads might seem like a normal thing to do.

Sure, your quads get worked in a deep squat, but not nearly as much as the glutes, hamstrings, adductors, and lower back. More importantly, the squat trains those muscles to work as a unit, which is why they're called the posterior chain.

So, rule number one when you're learning how to squat to depth: Take some weight off the bar. Stay light until you can squat right. The load can get heavier when your butt gets better at moving it.

Problem 2 You're Starting The Movement With Your Knees

A lot of people begin a squat by bending their knees and moving them forward. If this sounds familiar, it shouldn't be a surprise that you're not breaking parallel.

How can you get down below parallel if your knees are that far forward? You need to use your hips—not your knees—to power the squat.

Need a more familiar visual? Sit back like you would sit in on the john. As soon as you hit the bottom, fire your glutes and use your hips to push up, not forward.

The stronger your posterior chain, the stronger you are, period. Many lifts—including the bench press—require strong hip drive when the weights get heavy.

Solution Put The Bar Lower On Your Back

One reason why people struggle to reach depth is because they feel a little scared down there, like they might tip forward or backward. Part of this is because they're using too much weight (see Problem 1), but another part is where the load is located.

In order to squat to depth without losing your balance, it's important to make sure the bar—and therefore the weight—stays over the center of your feet. Balance comes from keeping the bar in a straight line from the top of the movement, all the way down to the hole, and then back up. The heavier the load is, the more difficult keeping the bar on this vertical, balanced path will be. At maximal loads, it only takes an inch to miss the lift.

If your high school coach taught you how to squat, chances are he told you to keep your torso as vertical as possible and look straight up at the ceiling. Besides the terrible stress put on your spine and neck by looking up, a vertical torso actually makes it damn-near impossible to keep the weight over your center of mass. 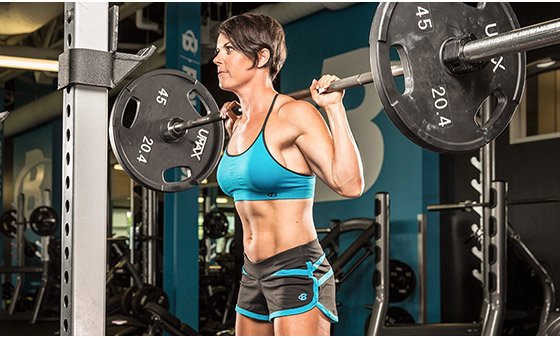 In order to squat to depth without losing your balance, it's important to make sure the bar—and therefore the weight—stays over the center of your feet.

Your spine angle (the angle your torso and upper legs make) can be as horizontal as it needs to be to keep the bar over your center of mass. Now, that doesn't mean you get to do squatty good mornings instead of squats—that's a surefire way to swing your center of mass too far in the other direction—but on the other hand you're not doing a front squat, so your spine shouldn't be vertical.

For most people, the best way to keep your center of mass over your center of gravity is to place the bar slightly lower on your back. Instead of placing it directly on top of your shoulders, place it so it sits on the shelf created by your mid trapezius above your shoulder blades.

Problem 4 Your Knees Cave In

Solution Push Those Mothers Out!

Many, many people have this problem, and they're the ones who complain that their knees hurt. Luckily, this is also the squat problem with the most straightforward solution: Better cuing! 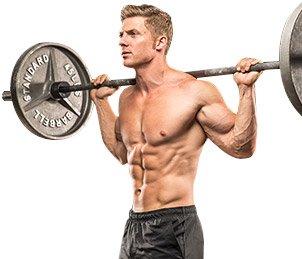 The single best reminder you can give yourself while you're squatting is "knees out."

The single best reminder you can give yourself while you're squatting is "knees out." As soon as you start to lower yourself down to the squat, shove your knees out and keep them shoved out for the duration of the rep.

When you do this, your femurs will get out of the way of your hips, so you can get down to the correct depth. Keeping your knees out also improves your hip drive because it puts the pelvis in the proper position. Your adductors will stretch tighter, which means they will then contract harder.

Keeping your knees shoved out can also keep your back from compensating for glute and hamstring weakness. This position will help keep your pelvis from tucking under—a phenomenon known as "butt wink"—which can cause lower-back pain.

It's been theorized that keeping your knees out during squats can also cure world hunger, regrow hair, and add inches to your biceps, but the studies aren't back yet.

Problem 5 You Lack Mobility Where It Counts

Many people struggle to squat to depth because they have poor ankle mobility. Your ankles, Achilles tendons, and calf muscles can have a huge impact on the position of your feet, your tibias, your femurs, and your hips. The flexibility of your hamstrings, groin, and even your thoracic spine can also play a big role in your ability to squat to depth.

If only there was a simple movement you could perform every day to correct all of these limitations. There is: It's called the squat!

Other than the normal mobility training like stretching and foam rolling, one of my favorite ways to open up the hips and train the body to love the squat position is Kelly Starrett's 10-minute squat test.

First of Many Beat Downs Mobility WOD
Watch The Video - 02:35

Sit back until your hip crease goes below your knee caps. You may need to use a mirror to get in the right position. Put your elbows on the inside of your knees, push your elbows out, and let your body grow accustomed to being in this position for 10 minutes.

It's not easy, and you may have to take a couple breaks, but spend some time—every day, if possible—doing this. Your hips, knees, ankles, and heavy squat will all be better for it!

The snatch and the clean and jerk are difficult movements. So before you load a barbell and try one of them, give these progression lifts a go.

Train Like An Athlete: Four Ways To Build An Athletic Physique

You don't have to be preparing for the Olympics to train for more athleticism. Take what you're doing now and make it more explosive, powerful, and effective!

Get Under The Bar: Heavy Lifting For Athletes

Don't get caught up in 'next best thing' and become afraid of heavy training. Learn the secrets of non-linear periodization and make the most of your off-season!