Returning To Training After An Injury!

If the injury stopped you from training for two weeks, it should take two weeks to get back into your normal format. This is an easy rule to follow. The total time needed for a complete return is effected by the injury that affected you during the break!

Once the physiotherapist has confirmed you can return to training, you should move ahead without hesitation. In addition to following the advice of your physiotherapist, it is important to follow a few rules when returning to training.

First, the return should be taken slowly but surely. Roughly speaking, returning time should be equal to the time lost from training. If the injury stopped you from training for two weeks, it should take two weeks to get back into your normal format. This is an easy rule to follow. 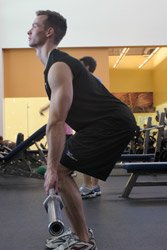 The Return Should Be
Taken Slowly But Surely.

The total time needed for a complete return is affected by the injury that affected you during the break in training. If you were in a cast for several weeks, it will generally take more than several weeks to return to your normal training regime. If moderate activity was possible during a training break of two weeks, it might take less than two weeks for you to return to their full potential.

The level of performance achieved may actually surprise them. Unfortunately, although the area injured has been rested, it is not in formal condition. As a result, full capacity training may overload the area injured, causing it to re-injure and sometimes make the condition worse. 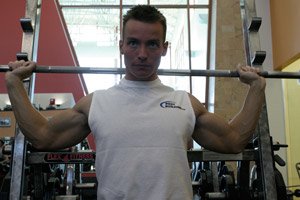 The Trainee Should Never Do As
Much As He Is Able At The Outset.

To be sure for a full recovery you should work out at half the pace as before (if the injury has been more than three weeks long then you should perform at an even slower pace) to keep the pace up you should add about 10% of your training schedule per week (e.g., 60% in the second week and 70% in the third week). It is important that you gradually increase your performance.

Just to recap. When returning to training from injury, don't over do it. You will not be able to safely do what you did before. For example if you were on my advanced training plan and was put out of action for several weeks it would be a good idea to return to my intermediate guide for a short cycle but keep to the advanced diet.