The Success Spiral: Joe Flacco's 6 Strategies To Go From Underdog To Overachiever

Baltimore Ravens quarterback Joe Flacco has heard it all. He isn't an elite quarterback. He doesn't win big games. Whatever happens in Super Bowl XLVII, it's clear that the naysayers were wrong. 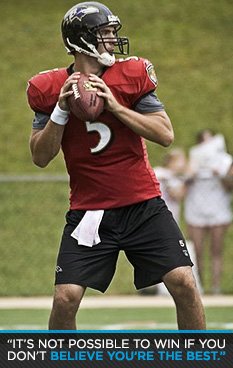 Joe Flacco proclaims himself the best quarterback in the NFL, which may seem laughable. Flacco holds no passing records. Never been to the Pro Bowl. Doesn't have endorsement deals to match elite QBs (not yet). The stat sheet says he's no Peyton Manning, no Tom Brady, no Aaron Rodgers; and the bio reveals no famous father or brother, no runway model wife, no succession struggle with the greatest QB in NFL history.

Yet those quarterbacks all will be watching the 28-year-old play on Super Bowl Sunday, and it's part of a trend: #winning. Flacco is 54-26 in five NFL seasons with the Baltimore Ravens, and he now has them on the cusp of gridiron immortality.

Flacco came out of the University of Delaware in 2008, becoming the first Division-I FCS (formerly 1-AA) quarterback taken in the first round of the NFL Draft since 1995. As the 18th overall pick, Flacco was supposed to bring the Ravens' offense up to par with a defense led by future Hall-of-Famer Ray Lewis. And, if not up to par—well, at least good enough to not lose the game for the vaunted Ravens defense.

Flacco was thrust into action early in his rookie year after starter Kyle Boller sustained a season-ending injury. He won his first start, a 17-10 victory over the Cincinnati Bengals, and he's started every game since for the Ravens. His moment arrived, and he seized it like Ed Reed snatching an opposing quarterback's pass from midair before heading up field.

It took all of his five-year, $30 million rookie contact, but Flacco has the Ravens in the Super Bowl against the San Francisco 49ers. Even now, you don't hear as much as you should about him. This Super Bowl is about Ray Lewis and his legacy. It's about the phenom QB on the other team. It's about Flacco's coach and the coach's brother. Hell, you've heard more about Beyonce than Flacco in the buildup to the big game. Yet Flacco's playing the best football of his career at the right time, and now he has the opportunity to silence his critics on football's biggest stage.

So what brought Flacco to this place? He's got a great arm, but equally important, he's got a great head on his shoulders. He are the six keys to Flacco's championship mindset—and how you can apply these keys to your own life. 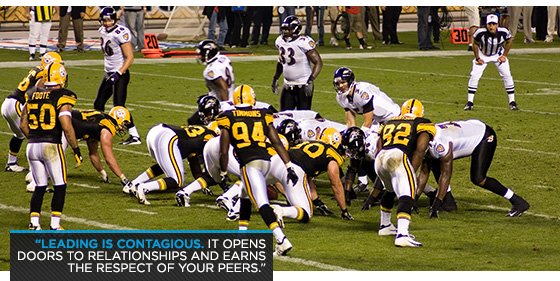 1 / Believe You're the Best

Before the 2012 season, Flacco was asked where he thought he ranked among the NFL's elite quarterbacks. Without wavering, he said he was the best quarterback. The answer caught many people off guard, and with good reason. Yet that's how he views the game. If you don't think you're the best, neither will the guys in the huddle. Confidence is vital to a quarterback's preparation and on-field success. 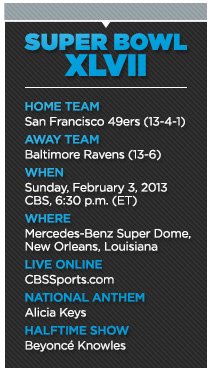 The best way to build the sort of confidence expressed by Flacco at that moment is to put in your time under the bar. For Flacco, it's taking a thousand snaps over time; for you, it may be cranking out a thousand reps over time. Do it long enough on the field or in the gym, and success becomes your expectation. That's all you know. And once you think that way, success will surely follow.

There's a reason why Flacco has never missed a meaningful snap during his five-year career: He uses his 6-foot-6, 245-pound frame to his advantage and puts in serious film study to avoid taking a beating on Sundays. Opposing defenses dissect film from all angles to find vantage points for hitting Flacco, and the taller a QB is, the harder he falls. Yet Flacco manages to stay one step ahead of the onslaught. He knows they're coming and prepares for it by hitting the weights and being one step ahead mentally.

You may not have the best genetics or the best gym equipment at your disposal, but you can have the best plan. The guy with the best muscle-building genetics in history almost certainly isn't Arnold Schwarzenegger, Flex Wheeler, or Jay Cutler; it's some guy who never bothered picking up a weight, or who didn't stick with it. Formulate a good plan, follow through with consistency, and, like Flacco, you'll be at the top of your game when your moment arrives. 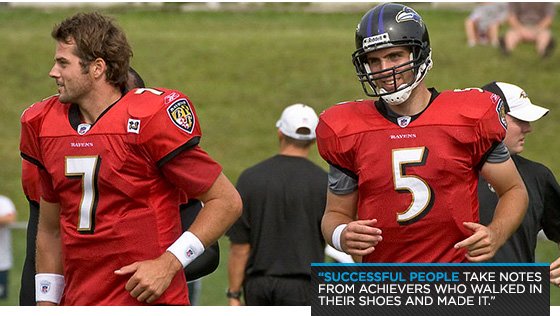 In the 2009 Wild Card Playoffs against the New England Patriots, Flacco played through a hip injury and wound up beating Tom Brady 33-14 on the road. Nobody knew the extent of Flacco's injury leading up to the game. After the Ravens won, he admitted it was painful, but that he had refused to come out. Instead of moving around and risking further damage, Flacco stood comfortably in the pocket and delivered a huge win.

When life blitzes you off the edge, you better react quickly to the change. Excuses can sack your progress. Don't be afraid to stand tall in the pocket and make the hard decisions. Determine the severity of injury or other setback before planning your next step. But you do need to take that next step, no matter how small or hesitant it may be. You can't waste time when it comes to your goals, because someone is out there waiting to take your place.

Flacco routinely takes part in good-natured jawing with teammates. It's his way of keeping everyone focused and on their toes. Even Ray Lewis hears it from Joe when he misses a tackle in practice. Getting everyone ready to play is a quarterback's duty. Flacco embraces his ability to rally teammates and make them better. It took time to master, but when he speaks, the Ravens listen. 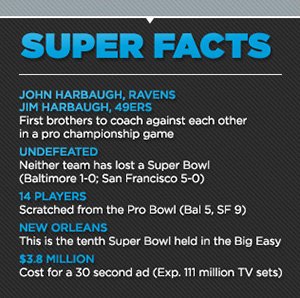 Unless God descends from the heavens on Sunday and suits up in blue, the Ravens are Ray Lewis's team. Rather than resent that, or work against it, Flacco has found his leadership role alongside the legendary linebacker. You may not the be the biggest or baddest dude in your gym, but you can still lead others by example. Today, leadership is a team effort. Play your part, and everybody wins.

5 / Control What You Can

Flacco led the Ravens to the Super Bowl in the last year of his rookie contract. Chances are he'll sign a huge free agent contract in the off-season, making him one of the NFL's highest-paid players. Money was never his driving force. Flacco focused on playing well and advancing his team through the playoffs because that was within his control. Now comes his payoff.

Gains not coming as fast as you'd like? Assuming it's sound, stick with your program while making the necessary tweaks along the way. Maybe you're working through an awesome lifting program, but your gains are slow because you aren't consuming enough protein. Don't junk everything—just take in more protein. Dial in all of the details, and you'll progress at the rate you're supposed to progress.

Flacco is concerned with one statistic: wins. He's never won an MVP or been selected to a Pro Bowl, but he has made the playoffs in all five of his NFL seasons. His regular season record is impressive, but his 8-4 postseason record stands out, especially since it includes six playoff road wins. Only Tom Brady had more playoff victories in the first five seasons of his career. This postseason, Flacco leads the NFL with a 114.7 passer rating.

Judge your gym progress by what really matters to you. If you aspire to be Mr. Olympia, the striations in your glutes matter. If you're a strength monster, boosting your 1RM is a major victory. If you're a 40-year-old with hypertension, bringing your blood pressure down from the red zone is what ultimately matters. That's your Super Bowl. Go out there and win it.