For years Creatine has been considered the big daddy of safe, legal and non-hormonal performance enhancers? And rightfully so. Throughout its existence the sports nutrition world has been subjected to many products hyped by marketers and manufacturers as "the next big thing" in legal ergogenic aids. In my time alone I have seen the likes of Boron, Sasparilla Root, Pyruvate, Ribose, Methoxyisoflavone, and too many other items to list, talking the talk... claiming to be "the next big thing" in performance enhancement, but to no avail! Creatine came on the scene, talking the talk, saying it would take the sports nutrition world by storm and that's exactly what it did!

Note: The product listing is at the bottom of this page.

NEW KID ON THE BLOCK

Every once in a while our presence is graced with greatness. The new kid on the block arrives on the scene with a lot of hype, promising to become "big man on campus". And the new kid claims the crown by delivering beyond our wildest expectations. I would describe it as greatness in its purest form. Well there is a new kid in town in the sports nutrition world. And people are beginning to talk. The comparisons are being made about this potentially tremendous ergogenic aid. Will he take the sports nutrition world by storm? And can he live up to the hype? Having an eye for talent, I think so. I believe it has the potential to be "the next big thing" in helping to redefine human athletic performance. This new arrival to the sports nutrition world is Citrulline Malate, remember the name because it is the sports nutrition world's equivalent to Lebron James of the NBA.

SO WHAT IS THE WORD?

The word is that in order to take athletic performance to the next level all you have to do is eat a bunch of watermelons and apples. No I am not BSing you! Well maybe a little, but that is not as far out of reach as it sounds... Listen up! 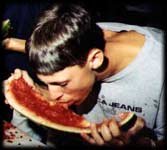 Citrulline Malate is a compound consisting of Citrulline, a nonessential amino acid that is primarily found in melons, and malate, an apple derivative. Of course to get enough Citrulline and Malate to realize its performance enhancing benefits you would have to eat so many watermelons and apples you would probably get sick, but you see my point.

For the past 20 years Citrulline Malate has been used in Europe to treat fatigue, muscle weakness and Dementia. Dementia is a mental disorder that affects your ability to think, speak and move. Citrulline Malate has been used with great success by European clinicians as a natural antiasthenic, with reported results of increased energy and overall feelings of well-being.

I first became interested in Citrulline Malate about 5 years ago when I read an abstract of a study performed on basketball players showing Citrulline Malate to significantly improve aerobic performance.1 I immediately looked to have this stuff custom manufactured because of these findings... after all I am always looking for new ways to increase my own athletic performance. Unfortunately at the time, the cost of manufacturing this compound was way too expensive, but fortunately through new manufacturing technologies, this wonder nutrient is available for the first time to us athletes outside of European labs!

WHAT DOES CITRULLINE MALATE DO?

Citrulline, although a non-essential amino acid, is not widely abundant in our daily diet. However, it plays a vital role in many important biological processes.

Of specific interest to all of us athletes in the trenches is it's role of regulating Nitric Oxide (NO). I mention this first only because the sport nutrition industry has been recently flooded with NO potentiating products comprised of L-Arginine and / or other Arginine salts, which until this day have been the most cost effective manner in improving NO function. It is well known in the scientific community that L-Arginine is a substrate for production of Nitric Oxide2, as well as catalyst for other metabolic reactions including its effects on insulin, various hormones and creatine synthesis.3

(The NO synthase (NOS) enzymes convert Arginine into Citrulline and NO)

So what is NO and what can it do for you? Nitric oxide is the cell-signaling molecule that has a part in regulating blood flow, oxygen delivery, glucose uptake, muscle firepower, and muscle growth. Obviously the ability to control these physiological effects can be of tremendous value to athletes.

Unfortunately I think many of the companies currently marketing NO products are missing the boat by not including Citrulline Malate in the current crop of NO supplements. You see, many of Citrulline's functions stem primarily from its ability to increase plasma levels of Arginine endogenously (in the human body).4 And what is really so exciting about Citrulline is that it seems to increase plasma Arginine levels better than taking the amino acid Arginine itself.5 You read correctly!

Research has shown that supplementation of Citrulline raises Arginine levels more effectively than taking the same dose of straight Arginine. Keep in mind that Citrulline Malate's NO enhancing properties are just one of the unique benefits this nutrient offers to athletes. And if the enhanced pumps and improved nutrient delivery properties are the reason you are using Arginine based NO products, you need to pay attention to Citrulline Malate.

Here is something else you need to know about Citrulline... it is an intermediate in the Urea Cycle. The Urea Cycle is a system in the liver of carrier molecules and enzymes that convert nitrogenous wastes into urea and eliminates them from the body. The production and removal of urea is essential for the elimination of ammonia and toxic nitrogen metabolites. Ammonia is extremely toxic to all cells and excessive levels may even be fatal. Even in healthy athletes, the build up of ammonia can lead to extreme fatigue and dementia.6 It also reduces glycogen formation, and inhibits the energy cycle. Obviously this is what every athlete wants to avoid!

Unfortunately all exercise, anaerobic and aerobic exercise produces tons of this stuff.7 Ammonia also forms when bacteria in the intestinal tract breaks down protein. The point is that the more ammonia in your blood, the poorer your athletic performance.8 Citrulline Malate comes to the rescue once again by aiding in the elimination of amino acid byproducts of protein metabolism. Researchers also purpose that Citrulline Malate may help to eliminate the burn associated with lactic acid build up as well as reduce the negative effects of ammonia and bacterial endo toxins on performance. Demonstrations also show Citrulline Malate as having a protective effect against acidosis and ammonnia poisoning.12 The metabolic actions of Citrulline Malate clearly explain the anti-fatigue properties in man and shows great promise to its uses as a performance enhancer for athletes.

No doubt there is a lot to get excited about when it comes to the performance enhancing potential of Citrulline Malate and how it works. Another study showed yet another way Citrulline Malate can benefit athletes - by increasing aerobic energy production.9 Studies show subjects using Citrulline Malate have an increase in the rate of muscle ATP (Andenosine Triphosphate, the major energy source within the cell) production during exercise and greater phosphocreatine recovery after exercise. So taking Citrulline Malate may result in muscles that can keep on going and going... completely smashing the aerobic threshold! These effects are more than likely mediated by the malate portion of the Citrulline Malate compound, which is a Krebs Cycle intermediate.

The Krebs Cycle refers to a portion of the metabolic pathway of amino acids in the conversion of sugars and fats into ATP, and the role of friendly bacteria (mitochondria) in our cells. The Krebs Cycle happens in the mitochondria, where sugar and fat pour in and are burned much like in a blast furnace, with a number of weak amino acids acting as a conveyor belt. Impaired ability to make ATP results in premature fatigue and "hitting the wall", unable to continue intense exercise.

Getting back to malate, it appears that it is synergistic when bonded to citrulline and this peptide may work better than supplementation of citrulline alone.10 While citrulline acts to increase NO and reduce performance inhibiting metabolic toxins, malate conditions the recycling of lactate and pyruvate, and takes part in the kreb cycle supplying instant and sustained energy.

WHAT DOES THIS MEAN TO ATHLETES IN THE TRENCHES?

The take home message is this. It appears that we may finally have another breakthrough in the sports nutrition industry. It is a breakthrough that promises to be extremely versatile in aiding athletes and fitness enthusiast alike in reaching the next level in athletic performance. And one that could very well be "the next big thing" in our industry. It appears that Citrulline Malate may provide FULL-BLOWN MUSCLE ENERGY that allows individuals of all walks to train harder and longer while speeding recuperation from exercise. Think about training with the same intensity at the end of your workout as you had when you began. Think about being able to break training barriers and personal records with more vigorous workouts. Well that is certainly within the realm of possibility when using Citrulline Malate and its performance enhancing firepower.

Think about training with the same intensity at the end of your workout as you had when you began.

J-Rod Disclaimer: No, I am not a scientist, and I don't pretend to be. I do not have all the answers and do not claim to. I do have extensive experience in the sports nutrition supplement industry, I am a competitive bodybuilder and also lead an active athletic lifestyle consisting of; boxing, baseball, tennis and football. Unfortunately in our industry, there are a lot of individuals who claim to be something they are not. Many of these armchair experts will hide behind the computer and act as the end all be all authorities of our industry and many of them have never touched a weight in their entire life...I am not joking! I am here today because I am just like you?I train 5 days a week. I balance my family life and business life and I also happen to be an avid user of performance supplements. I too am looking for the ultimate edge that will allow me to maximize my genetic potential. And so was born my company, MAN ...Born To Perform! Helping to Redefine Human Athletic Performance.

Joey Rodrigues is a bodybuilding competitor and trainer, who has years of experience in the sports nutrition industry.